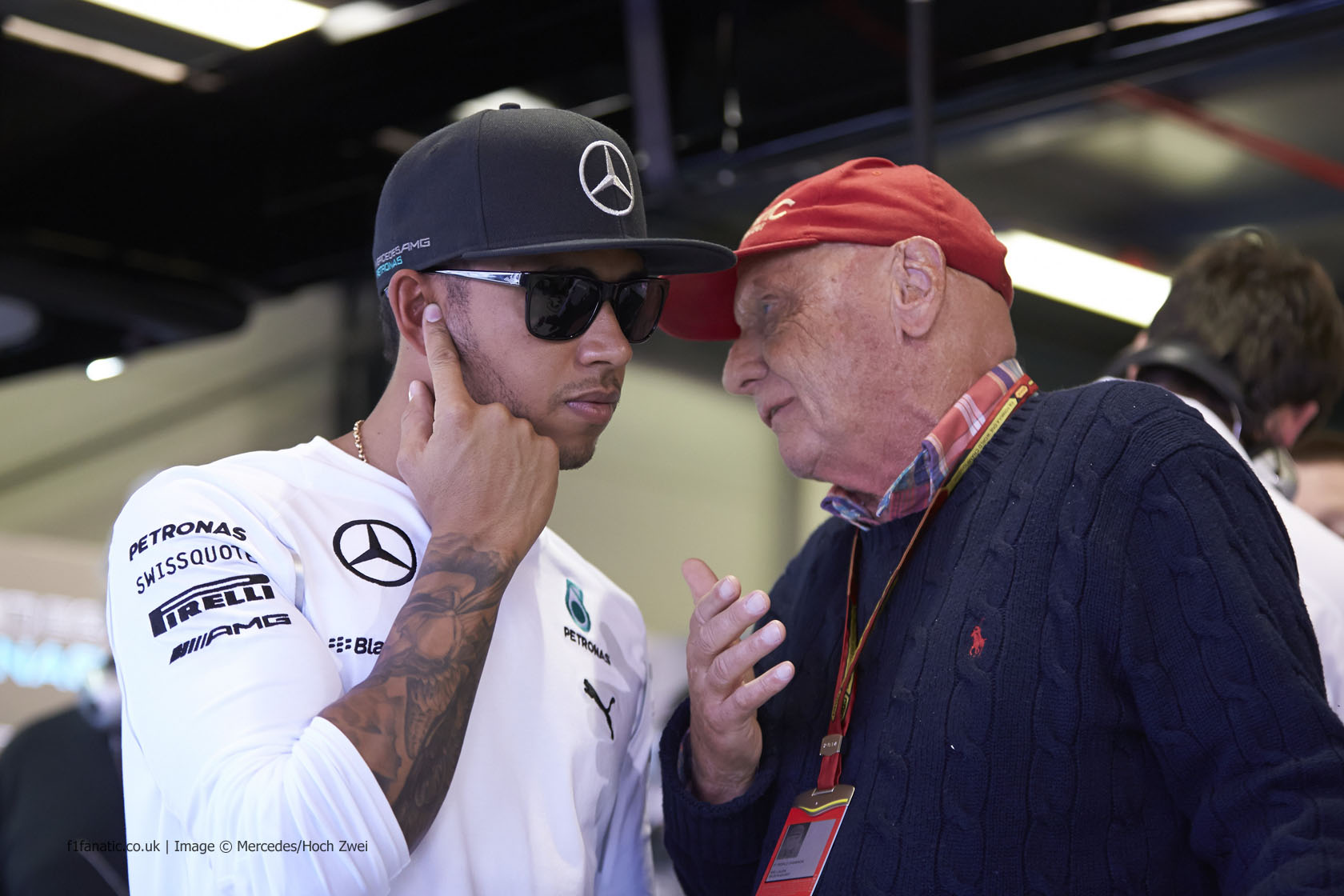 In the round-up: Mercedes’s non-executive chairman Niki Lauda has voiced his support for Lewis Hamilton’s decision to not allow his team mate past after he was told to.

Lauda: “If he [Nico] had been in the DRS position, he [Hamilton] would have let him by. But Nico never got that close. Therefore I do understand that Lewis said ‘Why? Why should I stop now in the middle of the circuit to let my team colleague by?’ He is fighting for the championship. So from my point of view Lewis was right.”

Ricciardo: “I honestly had a scare in the middle of the race. For a few laps we had some issues. Basically, we were down on power and had to get a bit crazy on the switches. I thought the race could have potentially ended early but we got through that.”

“BBC F1 pit-lane reporter Tom Clarkson explains why a piece of artificial grass at the exit of the final corner played a crucial part in Daniel Ricciardo’s win in Hungary.”

Horner: “Look at today and the job that he [Ricciardo] has done so far. He is really impressive and he has exceeded everyone’s expectations – probably also his own. (laughs) I think it is really healthy for the team to have two competitive drivers that work well together.”

Button: “We obviously use different radar to everyone else because on the radar the team thought it was going to rain. Fifth at the start of the race, definitely out of position, and I put the car in a good place then we threw it all away.”

Raikkonen: “Sixth doesn’t really give me anything. I think we deserved a bit more, but not after yesterday. I’m here to try and win races, OK it’s some good points but it’s nowhere near where we want.”

Vettel: “It wasn’t a great race. I spun, which was my mistake, and before that I was unlucky with the safety car in the first stint. The timing meant the first four cars lost positions to those running behind. Unfortunately we were then in the wrong mode for the restart and I lost two positions.”

And solid drives by @alo_oficial and @LewisHamilton to try and get the Show Biz tyres home. Lapping 8'sec per lap slower than 2003 times..:(

It's so depressing @MercedesAMGF1 are being asked if they're sabotaging @LewisHamilton. How stupid are some people? Go watch something else.

Can't guarantee this guy's gonna remain sober for much longer this evening 😇 pic.twitter.com/zSzisUXN1n

Big congrats to Daniel&Fernando. It was so close at the end! Going into the break, I'm still in the fight for the c'ship, which is great!

Another win to @danielricciardo in the #f1! Must be all that #mma training mate 💪👊

#f1 I remember Vettel had to face plenty of criticism last year for ignoring team order vs Webber. #multi21

With news that former team principal Flavio Briatore will be consulted to help increase F1’s popularity, reader OnlyMe is less than impressed…

Isn’t this like asking Lance Armstrong how to improve the Tour de France?

Briatore is a proven cheat, and worse someone who thinks nothing of risking people’s lives (marshals included) for his own benefit.

Every time I think F1 can’t sink any lower they find a way to prove me wrong.
OnlyMe

A horrendous crash for Emerson Fittipaldi in a CART race at the Michigan superspeedway today in 1996 led the two-times world champion, then 49, to retire from top-flight racing. However he subsequently made a brief return in the GP Masters series which ran in the mid-2000s.

Here’s Fittipaldi’s crash which happened at the start of the race:

59 comments on “Hamilton right not to let Rosberg past – Lauda”