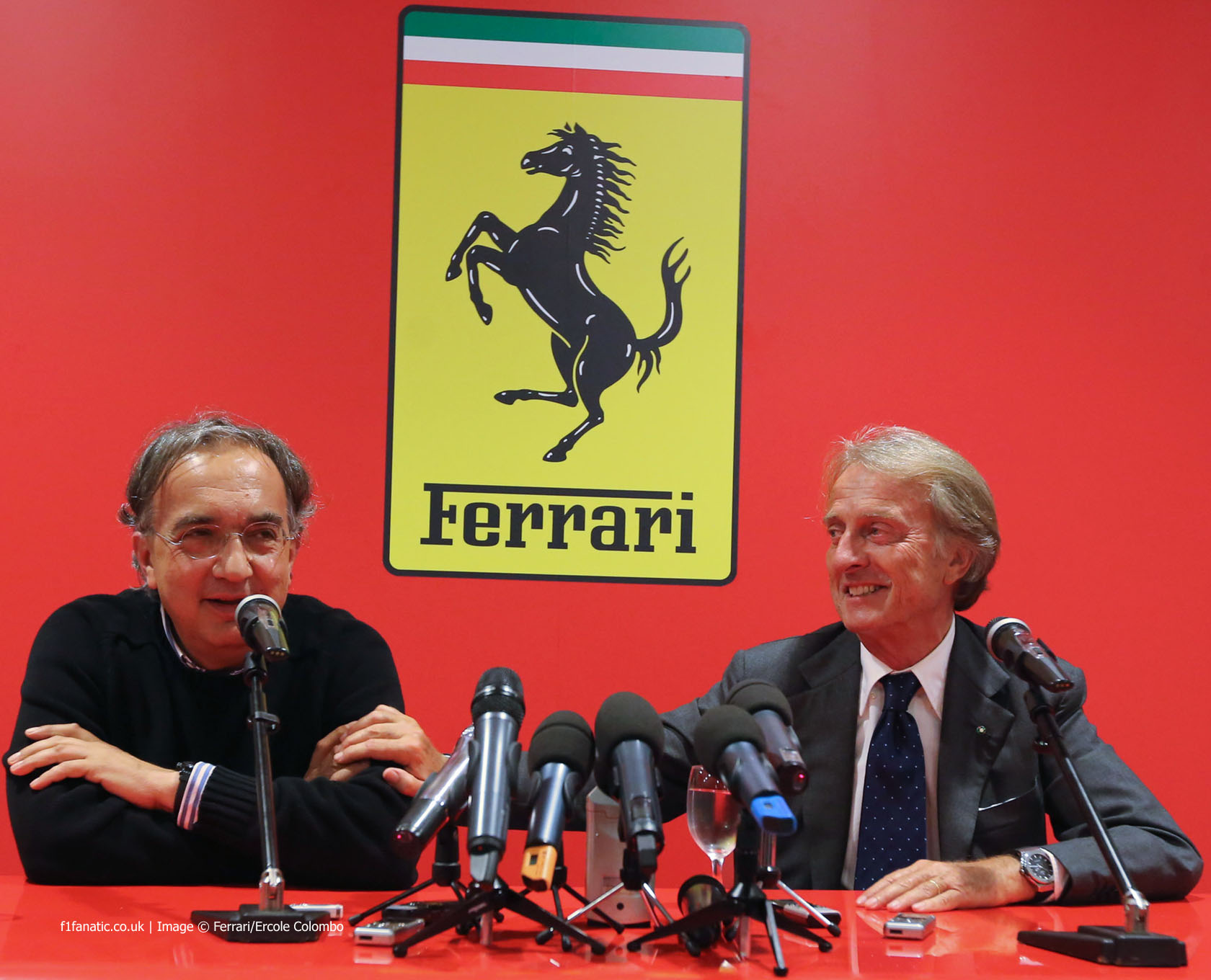 In the round-up: Fiat Group CEO Sergio Marchionne and outgoing Ferrari president Luca di Montezemolo had differing views on how to restore their F1 team to winning ways.

“Mr Marchionne said Mr Montezemolo had brought Ferrari to a new level of technological and organisational excellence that brought with it outstanding financial results. But he admitted to ‘misunderstandings’ between the two over how to improve Ferrari’s Formula 1 performance.”

Bernie Ecclestone: “His leaving is for me the same as Mr Enzo dying. He has become Ferrari. You see him, you see Ferrari.”

The Road to… Luca (The Buxton Blog)

Montezemolo on F1 after Ecclestone: “I think that Formula One has unbelievable potential all over the world. But I think that you need to approach Formula One even in a far [more] modern way in the future, in term of many things.”

“As for Marchionne himself who will ‘spearhead’ Ferrari in the future, he is widely credited as being the man who turned the Fiat concern around. On the other hand he has shown a less sure touch at Alfa Romeo which continues to consistently under-perform its potential while his strategy to re-launch Maserati as a rival to BMW, Audi and Mercedes is too new to say whether it will be a success or not.” “With attempts to bring in a budget cap or radical cost control having failed, there were fresh discussions at the Italian Grand Prix about other options to help the smaller outfits.”

‘Lewis one of the fastest ever’ (Sky)

“For me he is one of the quickest drivers ever to jump into a Formula One car. His natural ability is probably better than anyone in terms of outright speed.”

“I believe there are big chances of me staying here. We are quite advanced in negotiations, so let’s see where I end up.” Claire Williams: “Of course when you’ve got a talent like him then there are going to be teams that are looking at him. But I think Valtteri started his career with Williams, he’s an exceptionally loyal driver and he wanted to continue with the team. So there wasn’t any real concern that we were going to lose him.”

The Ridiculous Price of F1 Tickets (I Watch Too Much Racing)

“[Silverstone] are ‘offering’ the chance of a 0% interest loan, payable in 9 monthly instalments, to cover the cost of two weekend grandstand tickets for the 2015 British Grand Prix. That cost? £755.”

“Every two or three years we’re hit with a different category, even though it’s Formula One. And I’m saying to myself, ‘Wow, if I was around this year, how would I drive these cars, would I have loved them, would I not have enjoyed them?’.”

“Imagine my surprise, and the disappointment of the crowd, when a number of the ‘younger’ drivers shuffled quickly past their fans, heads down, looking embarrassed, with no attempt to engage.”

“The warmth of the fans is part of it; you feel it in other places too – for example in Melbourne and Montreal, where there is a great passion for Formula One – but at Spa you can actually ‘feel’ the history, in my case I feel it as a chill on my skin – it is like you can sense that on this track some unforgettable moments have occurred.”

I was told there'd have to major changes at the top of Ferrari for Brawn to consider a return. It doesn't get any bigger than LDM leaving.

And the British media was promised more access to Alonso two years ago. Hasn't happened. That team is in the Dark Ages. #f1

Quite a sight. Our boy @jazemanjaafar in the F1W02 car for the Young Development Driver day! pic.twitter.com/Ss9949GCnX

Ron Dennis: "We're shocked & saddened to hear of the sudden passing of Emilio Botin. The world has lost a great man." pic.twitter.com/buVReTD5M8

I know there's some challenges ahead and things which need changing, but this is the best F1 season I've commentated on these past 18 years

@Bullfrog has some doubts over plans to restrict team radio messages.

You can’t half-ban team radio. Who decides when a message is too much coaching? And what’s the penalty for that?

I think broadcasting of team radio could be improved; IndyCar and WEC do it better, with announcements from the Race Director, more timely and less selective drivers’ conversations and none of those awkward interruptions and pauses in commentary before some meaningless instruction to change settings, that’s often in the wrong language anyway.
@Bullfrog

On the same day Jacques Villeneuve scored his first IndyCar victory, brilliantly holding off the might of the Penske team at Road America. Al Unser Jnr finished second and took the championship crown off Nigel Mansell.

47 comments on “Montezemolo and Marchionne differed over F1 team”