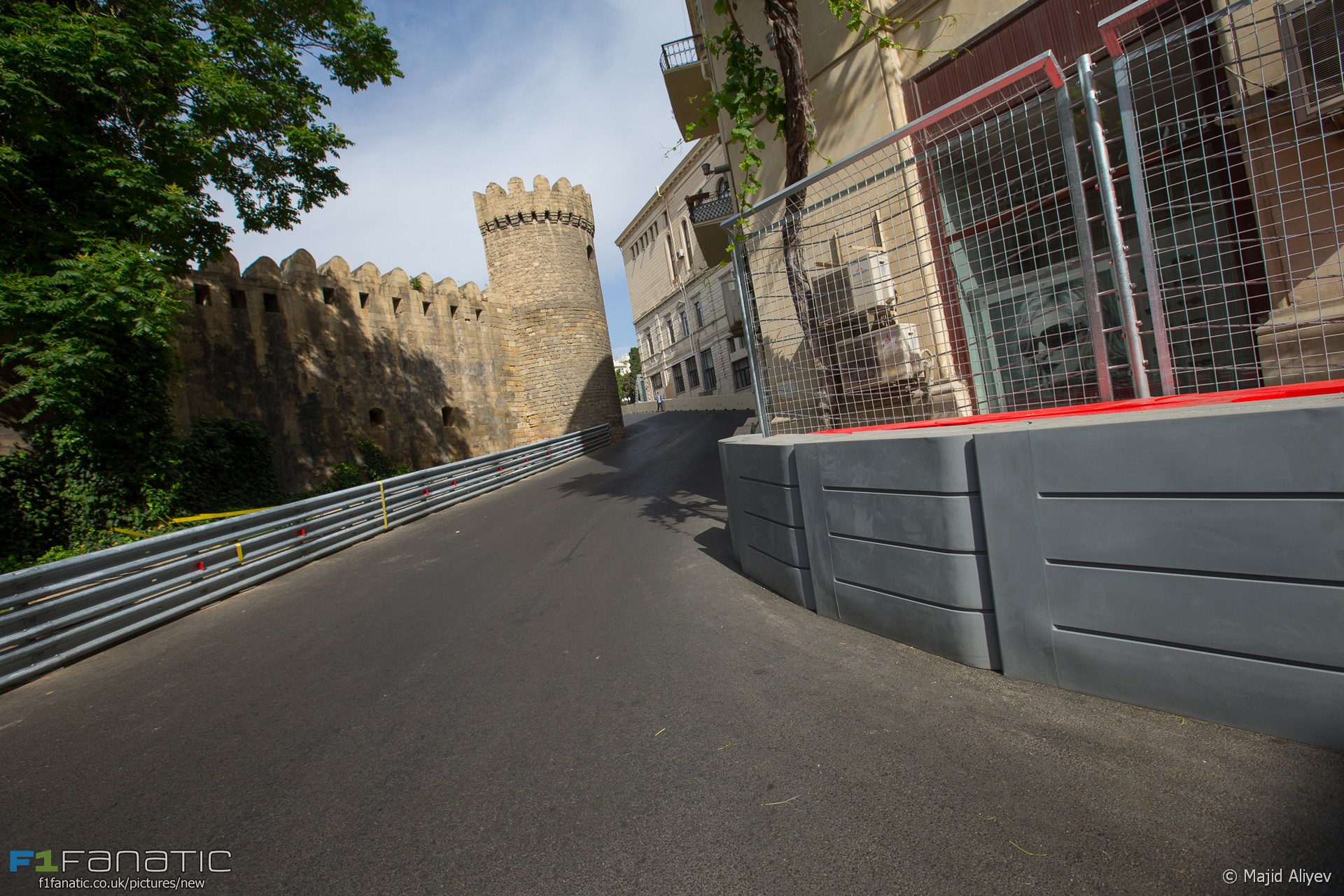 The first pictures of the new Baku City Circuit since the majority of construction work was finished reveals just how narrow sections of the circuit will be.

The sequence of corners from turn eight to twelve around the Qosha gate pictured above will measure as little as 7.6 metres across. This will make it one of the tightest areas on the F1 calendar, along with Singapore’s Andersen bridge and sections of the Monaco street circuit.

FIA Formula One race director and safety delegate Charlie Whiting inspected the work at the track. Organisers said 95% of the work regarding the installation of safety barriers has been completed with the first day of practice for the race just ten days away.

“I was very encouraged by the huge amount of work that has been done since my last visit,” said Whiting. “I’m pleasantly surprised to see just how much of the circuit is complete.”

“We spent four or five hours walking around the track examining every bit of it. In general, I must say that the standards of the circuit built so far are absolutely superb and personally I am getting quite excited about the idea of coming here to race in a week’s time.”

The surrounding road network will be entirely closed between June 14th and 16th in order for final preparations to take place ahead of the race weekend.

Meanwhile the organisation Sport For Rights held a media briefing in London today to draw attention to the Azerbaijan government’s use of sporting events such as F1 to deflect attention from corruption and human rights abuses in the country.

“This is the first time that Azerbaijan will hold the F1 grand prix, however, this oil- and gas-rich state has played host to other flagship sport and cultural events, including the inaugural European Olympic Games in 2015, and the Eurovision Song Contest in 2012,” the organisation said in a statement.

“These events form part of an elaborate public relations campaign waged by the Azerbaijani government, seeking to portray itself as a democratic country, and a good prospect for foreign investment.”

“Accompanied by a policy of wooing European parliamentarians and officials, President Ilham Aliyev’s autocratic regime hopes to use such events to hide the country’s appalling human rights record and divert attention from its on-going crackdown against civil society and independent media,” it added.