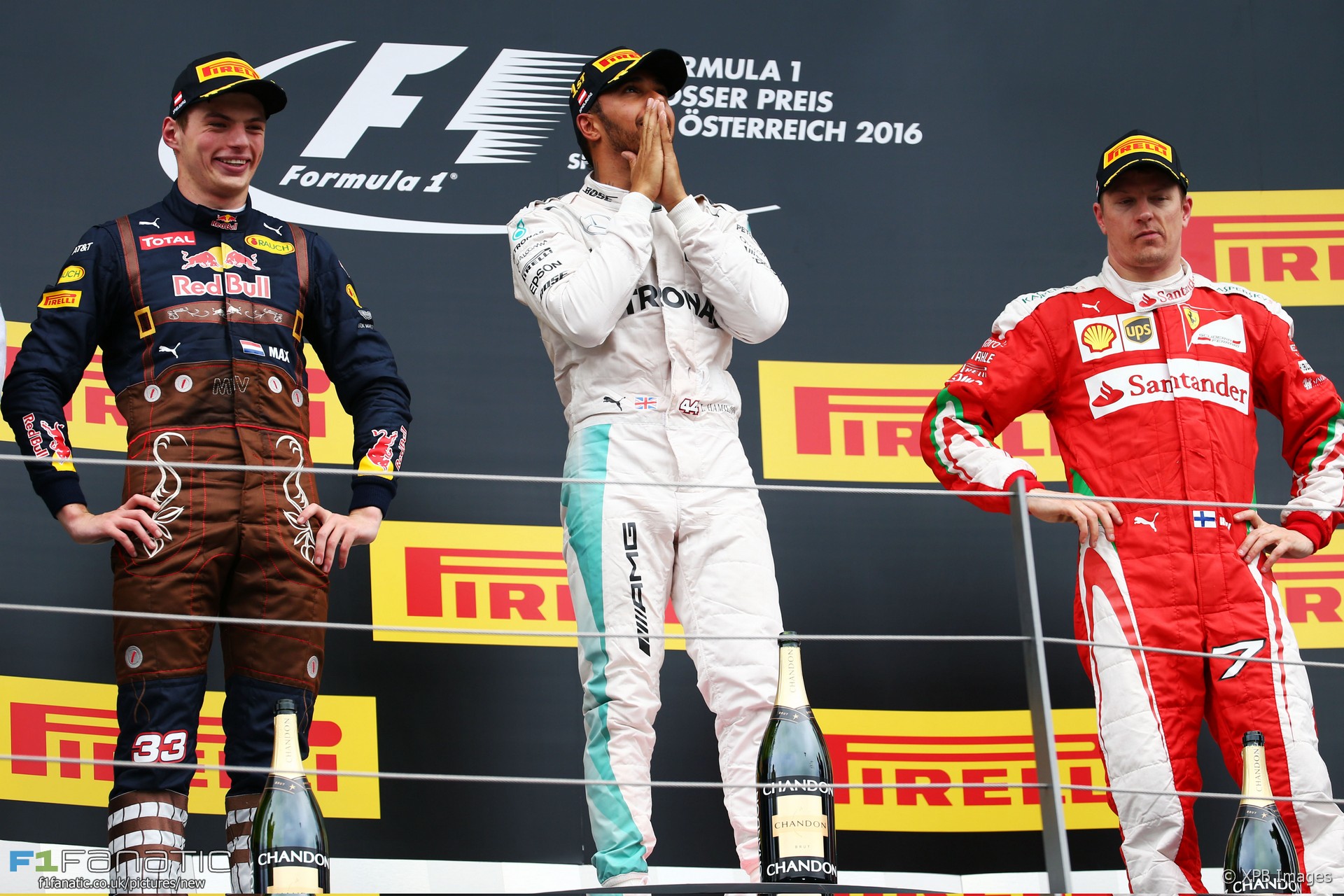 Some of the most successful countries in terms of winning racing drivers haven’t enjoyed success for many years. The most recent Brazilian race winner was Rubens Barrichello in the 2009 Italian Grand Prix and the last French victory was 20 years ago, courtesy of Olivier Panis in Monaco.

Hamilton’s first win at the Red Bull Ring means there are only three circuits on the current calendar he hasn’t won at. Two of those have only held one race during his F1 career: Baku and Autodromo Hermanos Rodriguez. Interlagos is the only track Hamilton has raced at every year since his F1 debut without scoring a victory.

Mercedes were on course for their third one-two of the season until their drivers tangled on the final lap, dropping Nico Rosberg off the podium.

After the first nine races last year Mercedes had taken a maximum possible 18 podium finishes. Over the same period this year they’ve managed only 11 – a clear sign their previous dominance has taken a hit.

This was Hamilton’s 46th win, leaving him five short of Alain Prost who occupies second place in the all-time winners’ table.

He also took his fifth pole position of the season, giving him a career total of 54, and his 30th fastest lap which puts him level with Nigel Mansell. Hamilton therefore took a ‘hat-trick’ of win, pole and fastest lap for the tenth time in his career.

His Q2 lap of 1’06.228 was the fastest ever seen around the Red Bull Ring, formerly known as the A1-Ring. This is the shortest lap time seen in F1 for over two-and-a-half decades, going back to Nigel Mansell’s pole position time for the French Grand Prix at Paul Ricard in 1990, which was 1’04.402.

Rosberg’s career-best run of 14 consecutive front row starts came to an end. Only five drivers have managed longer streaks, one of which is his team mate.

Instead Nico Hulkenberg joined Hamilton on the front row of the grid. This was his second front row start, the only other being his 2010 pole position for Williams in the Brazilian Grand Prix at Interlagos.

It was a good qualifying session for Jenson Button too, who earned his highest starting position since the 2014 British Grand Prix with third place. You have to go back to the 2006 Chinese Grand Prix for the last time a Honda-powered car started that high – on that occasion the driver was Button’s team mate Barrichello in a Honda RA106.

Another star of qualifying was Pascal Wehrlein, who equalled the best starting position for Manor/Marussia/Virgin by taking 12th on the grid, as Jules Bianchi did at Silverstone in 2014.

Wehrlein went on to score his first point and give the team its second points finish in its six-year history. This was the first since the team was formally renamed Manor at the beginning of this season.

Finally Saturday’s Formula E race saw (Nicolas) Prost and (Bruno) Senna start and finish first and second. The last time those two names occupied the top positions at the start and finish of a race was when their famous fore-bearers raced together for the final time in F1 at the 1993 Australian Grand Prix, Ayrton Senna leading Alain Prost to the flag.