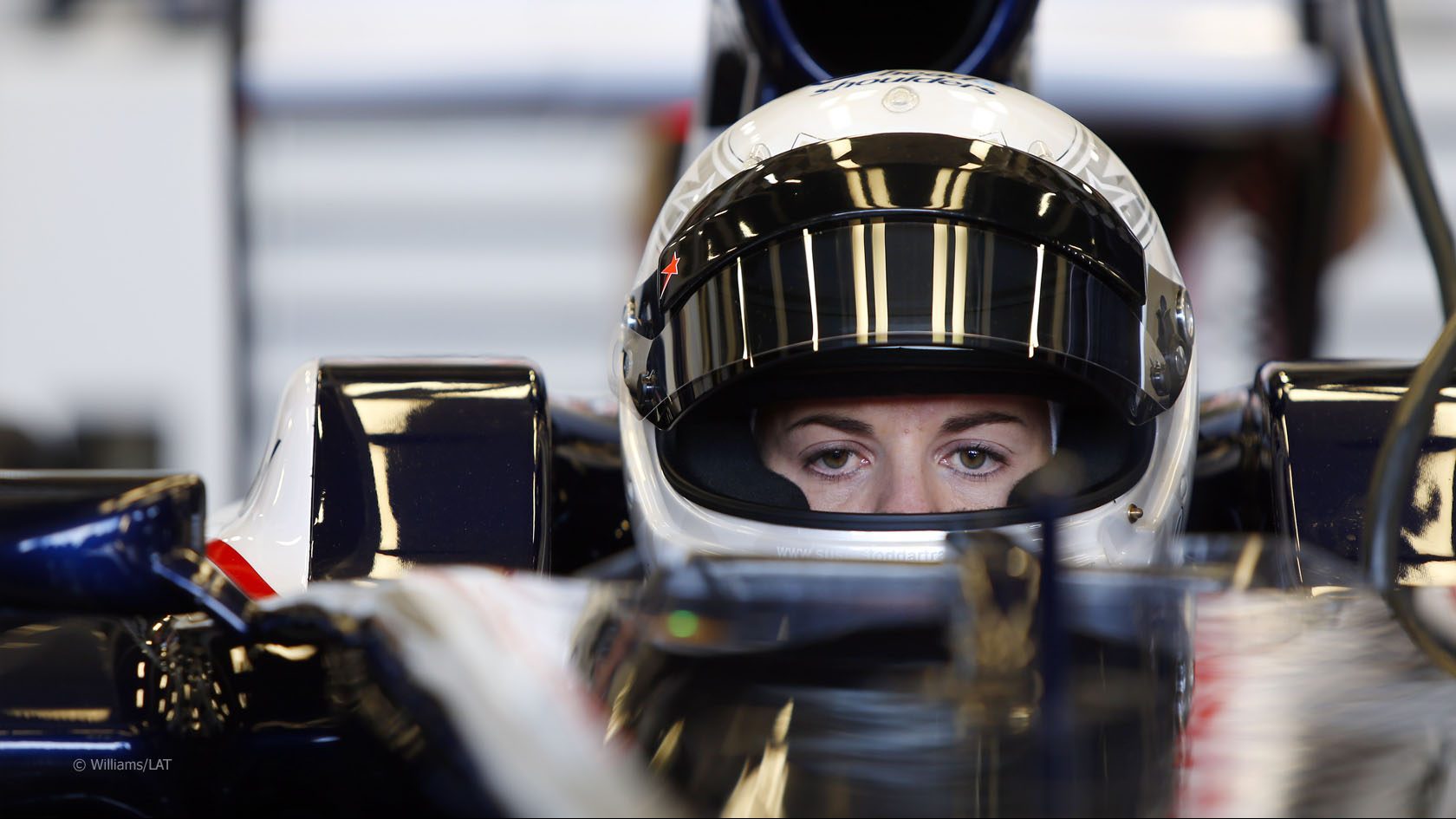 Last year the FIA appointed Carmen Jorda, a supporter of separate championships for men and women, to its Women in Motorsport Commission. Her controversial views rignited the debate over equality in motor racing.

The fact very few women have reached the top of motor racing has been taken by some as proof they don’t belong there. More enlightened views are beginning to be heard, but as @DieterRencken explains the sheer weight of numbers means it could be years before we see more women in the top flight.

How women participate in motorsport is a delicate yet recurring theme which affects the sport far beyond just Formula 1.

Should they be restricted to their own categories as per most physical sports? Or, reflecting the trend in most aspects of modern society, should they be treated as equals and be permitted to compete against men in open competition?

There is a third option, one pursued by arguably the least physical but most cerebral of sports, namely chess. Here there is a competition for both genders (which has never been won by a woman) and one for women only. This arrangement might be said to discriminate against men; it could also be argued that having a single-sex competition devalues the ‘open’ championship.

The equality in motorsport debate hit prominence in December after the inclusion (as a permanent seat) of the President of the FIA’s Women in Motorsport Commission (established in 2010) on the FIA World Motorsport Council. Thus Michèle Mouton, who competed against men on equal terms in world rallying during the eighties – regularly shading them – has input into global motorsport’s affairs on a par with that of the other 25 members.

Some progress has recently been made at last by the FIA, and not only at WMSC level. The FIA Senate, previously a men-only cabinet, now counts two women among its number. Formula One Management has increased its female tally at senior management level while F1 (and other) teams have long appointed on merit rather than gender, be the positions for engineers or management, including team principal.

The WiMSC, though, recently received much unwelcome attention after F1 wannabe Carmen Jorda, token tester for Lotus F1 Team before its return to Renault ownership, spoke in favour of women-only categories. Her opinion was mistaken by some as being representative of FIA policy. In fact Jorda, nominated to WiMSC by Spain’s national motor club for a representative position, is just one of the commission’s 30 members.

This despite her comments on Twitter in October: “I believe a women’s F1 championship would give us the chance to achieve our dreams and compete on an equal footing – as in other sports,” having previously said “It’s not fair to be compared with men because we will never be on the same level.” Self-confidence surely is a prime ingredient for a race driver, no?

Saliently, though, Mouton has regularly spoken out in favour of open competition. And she should know, having for years had no option but to compete against men during WRC’s most brutal (and lethal) era. A shrinking violet the Frenchwoman most certainly was not, as hours of video footage attest.

Jorda’s comments received condemnation from, among others, numerous female racers. IndyCar competitor Pippa Mann, who recently set a ‘female first’ by averaging over 230mph on the Indianapolis oval, traded jibes with her on Twitter. Both are, of course, entitled to their views, but the debate raged across cyberspace, eliciting the usual swathes of pro/con comments.

Conveniently overlooked during what was to many a destructive spat is that the WMSC – not Jorda – holds final sway in such matters. The FIA is hardly likely to mandate for or against separate categories for men and women based on social media wrangles between two competitors.

That said, a London-based promoter has plans to stage a six-event women-only single-seater championship initially to be known as SHE (sic), but due for a name change if it gets the green light. The series would comprise five legs in Britain and one in the USA with the winner due to receive a F1 test.

Although the promoter (perhaps optimistically) believes the series could rank second only to F1, the concept has understandably polarised opinion, with many questioning whether representative grids will even be achieved. It is not the first women-only initiative – recall the ill-fated Formula Women series launched in 2004, initially using Mazda RX8s, and later Caterhams. It stuttered along for four years before being canned.

Should SHE (or whatever) be launched, it would be analogous to the world chess model in that women only could compete, but would still be permitted to compete in open categories of motorsport. Thus Jorda could do SHE and Mann IndyCar, or whatever. ‘Unequal equality’ as they say, for men would be banned from SHE, but not vice versa…

However, the wider debate has gained further traction through the unstinting efforts of Dare to be Different, a campaign founded by Susie Wolff – DTM driver, occasional F1 tester and participant in four official grand prix practice sessions with Williams (led by Claire Williams, another trailblazing woman of motor racing) – who, on D2BD’s website, states “Our sport is performance-based, so gender is irrelevant.”

One of D2BD’s plans is to encourage girls to attend karting academies with a view to introducing them to the sport before feeding them into open grids, as Wolff explained during a Women in Motorsport Commission media discussion:

“I founded Dare to be Different which is just based in the UK just now, and we are getting young school girls to kart tracks. It’s not just about finding the next talented female racing driver; it’s about opening up all the different disciplines, all [of] the sport so these young girls understand that this preconception that motorsport is just for boys is wrong.

Still, such initiatives must address the core question: Why have so few women made it to F1? Of six to have participated in grand prix weekends only two – Maria Teresa de Filippis (three starts) and Lella Lombardi (12) – actually took to the grid of a world championship event, with the latter scoring a point, or, as fate had it, half a point after the 1975 Spanish Grand Prix was prematurely stopped due to an accident.

These statistics are, of course, grist to misogynist mills. Yet they point to broader questions: Is gender irrelevant, as Susie believes, and both should compete together? Or if, as Jorda believes, women “will never be on the same level”, should F1 create women-only categories? The tiny number of women who have reached F1 appears to support Jorda’s position, so what factors might be at play which explain this?

There is no doubt that driving race cars whose primary technology is aimed at increasing downforce to create cornering forces of 6g is as much a mental as physical exercise – as post-race images of F1 drivers prove – but does that imply women are genetically unable to cope? Wolff proved women have the fitness and athleticism to cope with modern F1 cars, while female marathon runners and endurance racers put to rest any doubts about stamina.

In a recent interview Mouton provided a fascinating insight into the physiological difference in performance between genders. She believes the genetic make-up of males is such that are more inclined towards risk, whereas females are naturally more cautious and prefer to build up to speed. However, she concluded that ultimately there should be little (or no) difference between them – as she proved during her stellar career.

Why, then, no female F1 starter for over 40 years if women can indeed compete on equal footings? If anything, from a promotional perspective, women hold advantages over men, if for no reason other than giving the sport better access to previously untapped markets. Accordingly, there must be some other reason.

The answer appears to lie in motorsport’s pyramid of junior categories and participants. The broader its base, the greater the numbers rising to the pinnacle. From a base of, say, 10,000 boys entering karting globally, only a hundred or so will eventually make it to full professionalism. From there a small handful of newcomers reach F1 each year: just two new names feature on the list of 2018 F1 drivers.

Although statistics vary across regions, Britain’s current under-16 boy/girl karting license split is 1,794/139. This meaning that from the start females are outnumbered by a factor of 14:1 in an activity where micro-percents are absolutely crucial. These sort of statistics apply across the world to lesser or greater extents.

Peer opportunities play a crucial role. During their pre-teen years more boys (than girls) are likely to have friends with access to karts, in turn enabling boys to “have a go” more readily than girls. Ditto the old stereotype of presenting pink dolls to girls and blue cars to boys as birthday gifts – while that prevails a lower percentage of boys will become ballet dancers than girls, their raw talents being equal.

As proof of the importance of friendships, consider that Force India’s Esteban Ocon claims credit for getting Pierre Gasly into motor racing: “When we were seven or eight our parents were friends and he [Pierre] was playing football while I was driving go-karts. My dad said to him to try my go-kart, and after that he quit football for racing.” Much same applied to the late Jules Bianchi and Charles Leclerc.

Of course such peer opportunities apply across both genders, but ultimately it comes down to numbers, i.e. the size of the pyramid base. Speaking to Hans Erik Naess, author of The Sociology of the World Rally Championship (2014), an scientific study of the social impact of the WRC, Mouton said:

“Either [gender] has the ability to be talented; that is not something specific to men. It is more that not enough women are trying, or not being given the same opportunity or equipment. I was lucky enough to be in teams where I always had the same car as my team mate, and this I’m sure has helped a lot and given me the extra motivation to reach a man’s level.”

Although not F1-specific, Mouton’s comments surely apply equally to F1. Thus the absence of women in F1 is not simply a gender or equality “thing” or physical or talent question, but an opportunity issue: The more parents encourage, permit even, their daughters to take up karting, the greater F1’s chances of eventually feting a female F1 world champion. Until parental mindsets change, the status quo is unlikely to shift markedly.

Tomorrow on F1 Fanatic upcoming racer Jamie Chadwick will give her perspective on the challenges facing young female racing drivers.