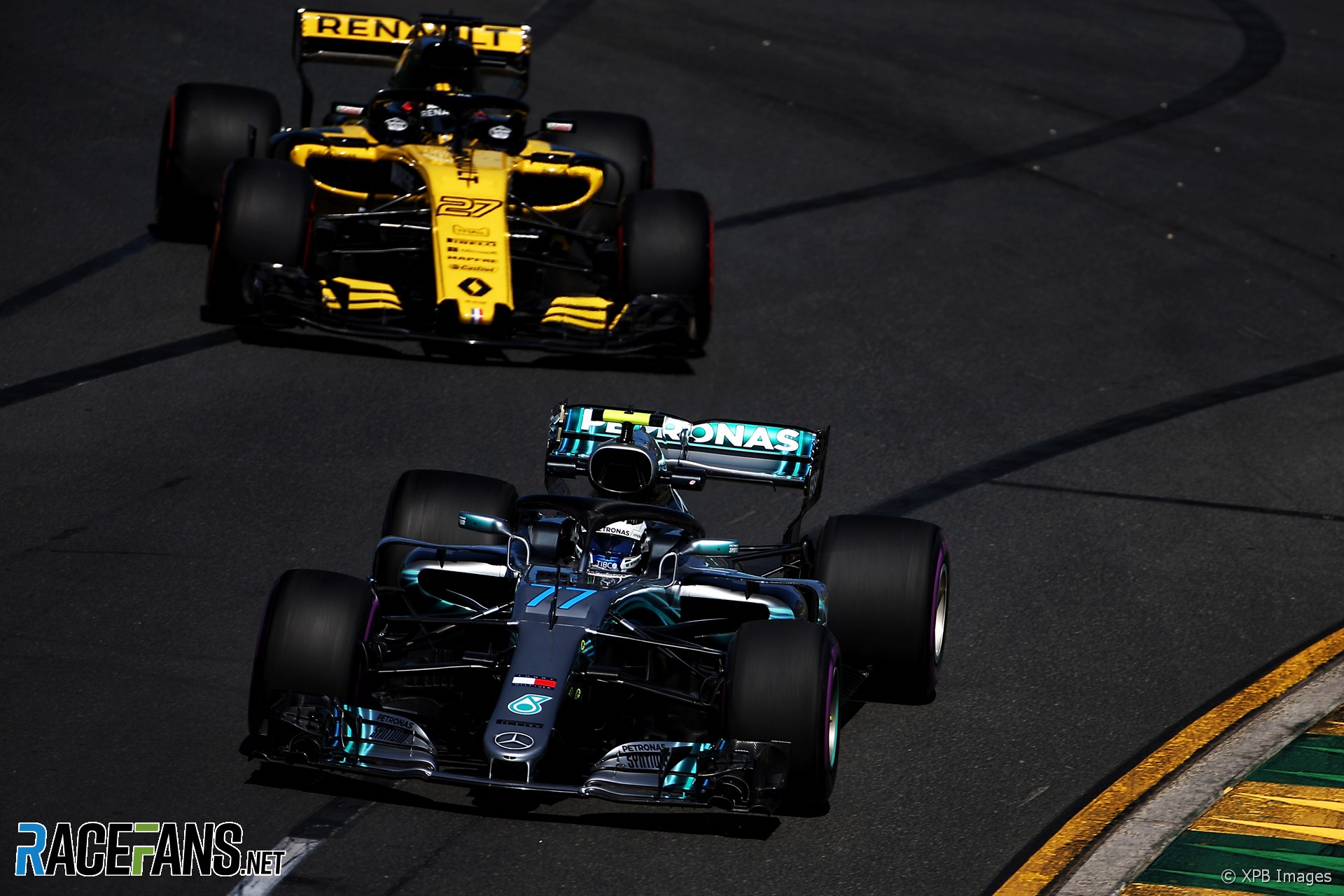 In the round-up: Valtteri Bottas believes Formula One engines are much closer in terms of performance in the fifth year of the V6 hybrid turbo rules.

Bottas explained why he found it hard to come through the field in the Australian Grand Prix:

The engine differences, they are not massive any more. For sure we still have a little bit of an advantage to Renault but it is not massive. And those cars they are not too bad in the corners.

"I know people say that if there is only gravel, it is more of a penalty if you go off, which is true. But if you have a private track day and somebody goes off in their Porsche or AMG, then they are likely to be paying for new parts. €7000 is an expensive spin."

"Three fire engines were sent to deal with the small fire and we left at around 8.30am."

"At first sight, it looks like the design may be of particular interest to the teams that have followed Ferrari's sidepod inlet path, namely Haas, Williams and Red Bull, so it will be interesting to see if, and how quickly they would be trying to copy it and put it onto their cars in an actual race."

Billy Monger returns to the racing circuit, with the help of some expert prosthetics (Dorset Orthopaedic)

"It was really important to make sure that the socket for this device was able to transfer the large forces exerted while braking comfortably over Billy’s limb."

"When Hamilton lost the lead in Australia, the engineers were immediately aware that there was a problem."

"After around 20 years of working on-and-off on the car, the Hobsonville Point resident has finally finished restoring his McLaren M4A, a model of Formula Two car designed in 1967."

Thanks to Stephen Crowsen for the tip

Quick pro tip for you @ForzaMotorsport gamers. The McLaren MP4/4 around the Nürburgring is an extremely fun thing to try.

Another plane. Will see Bahrain at about midnight. On the plus side, a flight from Birmingham meant another precious couple of hours with the family. pic.twitter.com/DioVl0qeo9

Another @F1 team deal for @Acronis who are now the 'data protection partner' for @ForceIndiaF1. Their logos are already on @WilliamsRacing and @ToroRosso. #F1

As I leave for the #BahrainGP, I would like to thank everybody in Australia for the two weeks I got to spend in your country. I had an absolute blast and was happy to see your country has so much more to offer than just @danielricciardo 😉 🇦🇺

Is this going to be the year we finally get to see what Romain Grosjean is capable of?

I consider Grosjean a good driver. He really turned things around back in ’12-’13 (aside from almost taking Alonso’s head off). He and Raikkonen gave Red Bull a run for their money at Nurburgring and was exciting to watch during those times.

He does whine a lot, but can’t say I wouldn’t do the same in his shoes. I believe he deserves a chance to show what he can do again, so I’m excited to see if this car’s got the goods – as long as it can finish.
@Rpiian

35 comments on “F1 engines much closer on performance now – Bottas”