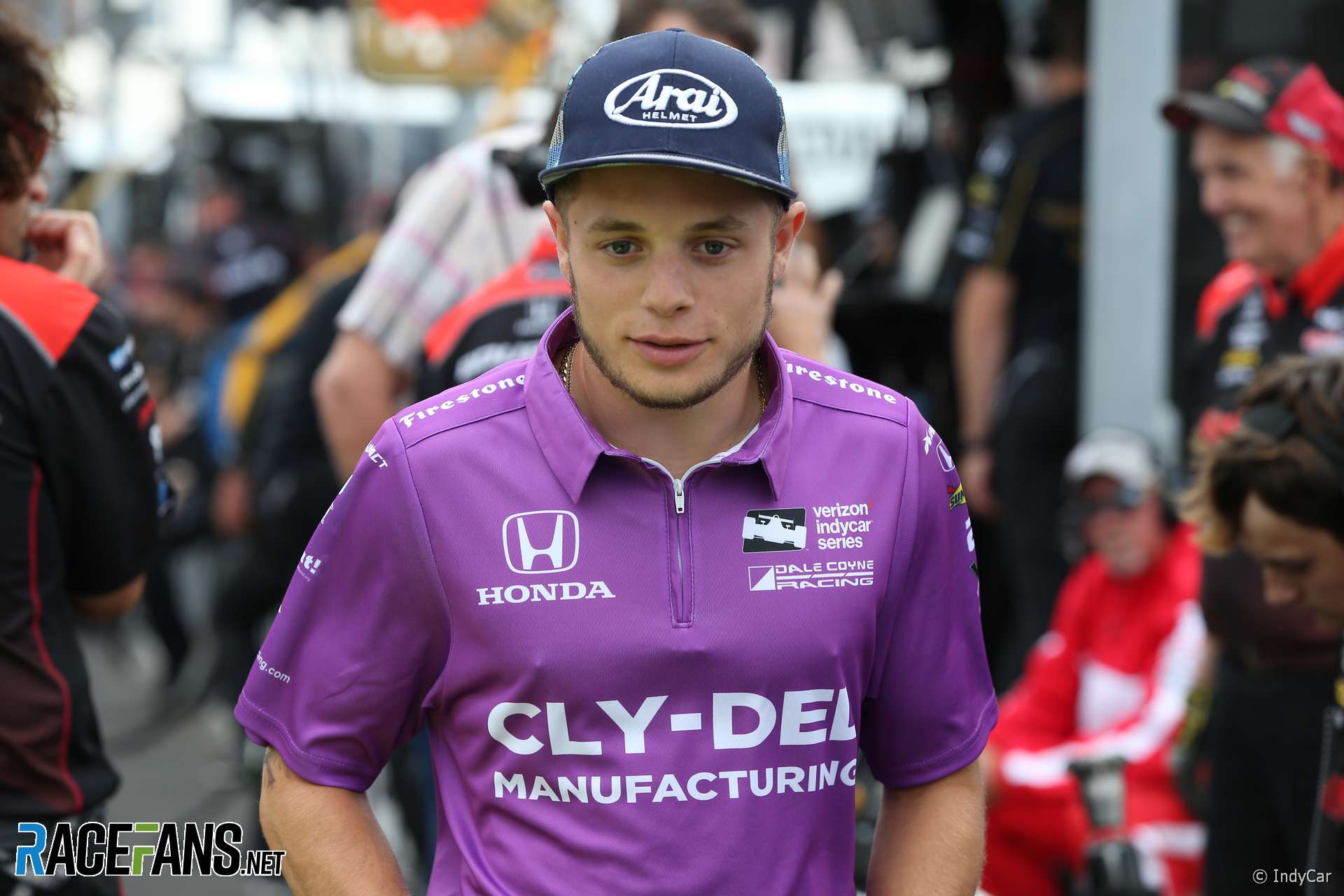 Former F2 driver Santino Ferrucci has accepted responsibility for the collision which led to his four-race ban from the series while strenuously denying claims he racially abused former team mate Arjun Maini.

Ferrucci accepted responsibility for the clash with his Trident team mate at Silverstone in an interview for the Marshall Pruett Podcast. The collision was part of several transgressions which earned Ferrucci a four-race ban and led to him being fired by Trident.

Ferrucci said he had already been shoved by Maini following an incident in the weekend’s feature race. He explained how he drove into his team mate following the sprint race in retaliation for Maini forcing his way past at turn four during the race.

“He threw a pass right up the inside, drove into my car and bent my front suspension which put me off the track,” says Ferrucci. “When we finished the race, I was very, very furious and very emotional. It’s just a very dirty move towards me.”

“After the chequered flag I got behind him initially to show him I was pissed. I wanted to put up a hand gesture. I had just thought ‘all right, go around’ and when I went to go around I clipped him.”

Ferrucci did not deny the contact had been intentional but downplayed its severity. “My whole karting career I took nothing from nobody,” he said. “I was one of those people if you tap me I put you in the fence. I just refused to have a gasp of air for anybody. I was super-aggressive, super-mindset of focused, this is my world.

“In cars you can’t have that mindset. You can’t go around just hitting people, you’re going upwards of 200mph in some places, parts fall off and people could get seriously injured. You should display that aggressiveness in difference was by closing doors, blocking, different techniques. Not necessarily driving over people. I’ve had my fair share of moments in go-karts where I’ve been driven over and I’ve driven over people.

“Trust me, if I wanted to hit him I would have done it the correct way and wrote off the cars.”

After failing to attend a stewards’ hearing after the race, Ferrucci was banned from the next two double-header rounds. His explanation for missing the hearing was that had to leave urgently to visit his uncle who had been diagnosed with pancreatic cancer.

Ferrucci blamed his former Trident F2 team for not passing that information to the stewards. “I had emailed the stewards prior saying I had a serious family emergency to get home for,” he explained. “The email was never received through my team, they never sent it, because we don’t have the stewards information personally.

“I had apologised on the Monday and Tuesday to all of the stewards to go out of my way to find and email them. They had emailled me back saying they were unmoved and did not care for my other responsibilities, which is pretty harsh. That’s why I missed the meeting, which I wish I never did. But you live and learn.”

Ferrucci’s Trident team issued a statement criticising his conduct towards Maini. Insinuations that Ferrucci used racially-charged language against his team mate have also been levelled at him, which he denied.

“I wouldn’t even know where to start with that,” he said. “What people are calling me is not true.”

Despite the controversy, Ferrucci remains alongside Maini on Haas’s junior driver development programme. “The guy is trying to make a career and we don’t want to pull the rug under his feet,” explained team principal Guenther Steiner at Spa.

Ferrucci said he would have been kicked off the programme if the allegations of racism were true.

“I feel a lot of people don’t understand that when you’re driving also for an American team – I’m representing Haas F1 as an American – so if that was a true thing I don’t think I would still be a development driver.

“I don’t think that would be in anyone’s best interests and I don’t think I would even be a racing driver if that was true, because of how sensitive that topic is. So for people to come out and say and express that is really upsetting.”

Following his ban Trident announced they had fired Ferrucci due to the weekend’s events as well as “the serious breach of [the] driver’s payment obligations.” However Ferrucci claimed he already had a deal in place to leave F2 and return to IndyCar, where he started two races earlier in the year.

“Silverstone was technically my last race by contract because I was going to come back here,” he said. “I had made a deal with them and it was said and done.”

Ferrucci came 20th in yesterday’s race for Dale Coyne at Portland after stopping on-track with a technical problem during the race.

30 comments on “Ferrucci speaks out on Maini clash ban: ‘If I wanted to hit him I’d’ve wrote off the cars’”