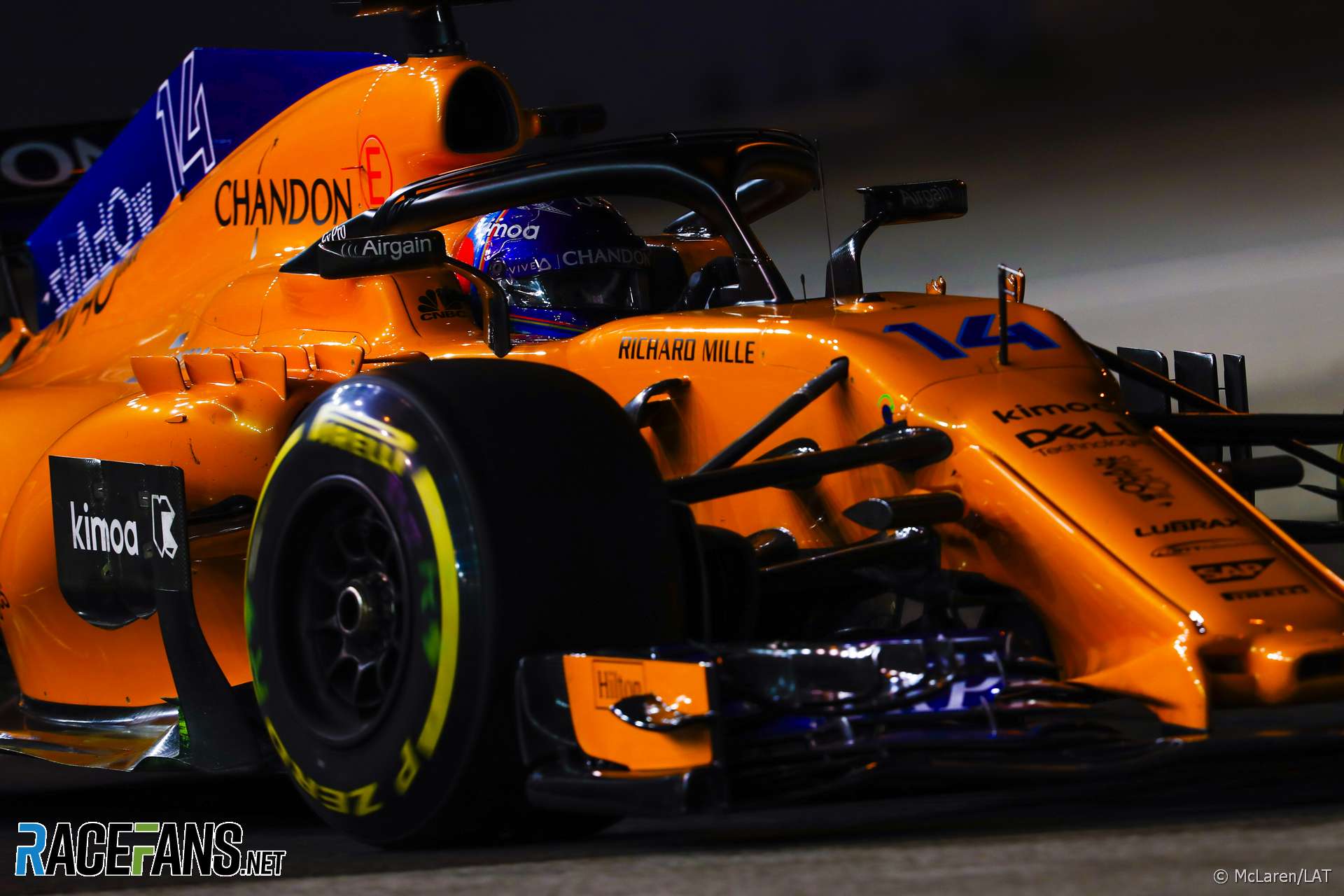 In the team radio highlights from Singapore: Sebastian Vettel was dismayed by Ferrari’s tactics, Romain Grosjean fumes at F1’s rules, and Kevin Magnussen thwarts a cheeky effort by Fernando Alonso.

The race began badly for Force India, as Sergio Perez knocked his team mate out of the running at the start:

Sebastian Vettel has passed Max Verstappen for second place and was sitting on Lewis Hamilton’s tail while the race leader nursed his tyres. Ferrari were listening to Hamilton’s radio messages but suspected Mercedes were trying to dupe them:

Hamilton then picked up the pace and Vettel responded, heading for the pits. Ferrari thought Hamilton would come out close to their man – but it didn’t turn out that way:

And when Verstappen pitted, it got even worse for Vettel:

Hamilton was now free to cruise to victory, though Mercedes had contingency plans to make:

His run to the chequered flag was disrupted when he caught Romain Grosjean, who was too busy trying to pass Sergey Sirotkin to let the Mercedes by:

Grosjean’s messages suggest there may have been times when he left his broadcast channel latched ‘open’, preventing his team from communicating with him, which could explain how he managed to ignore the blue flag warnings for so long:

The Haas driver was one of four midfield runners who made it into Q3 and therefore had to start on used tyres, which he believed ruined his race:

Grosjean’s mood did not improve when he was penalised for holding up Hamilton:

Another driver who lost out from starting on worn tyres was Perez, who also got stuck behind Sirotkin:

Perez forced his way past Sirotkin but tangled with the Williams as he did:

But it earned him a penalty:

One of the drivers who capitalised on Grosjean and Perez’s troubles was Leclerc. Early in the race he was concerned he was using his tyres too quickly, but it paid off when he passed Pierre Gasly:

Sirotkin’s eventful race continued when he out-braked himself while scrapping with Hartley, picking up a penalty:

Both Mercedes drivers had trouble with traffic. For Valtteri Bottas the problem was he was unable to get close enough to Nico Hulkenberg for the blue flags to be shown:

Other drivers were getting incorrect blue flag signals:

The biggest winner in the midfield was Fernando Alonso. After cementing a ‘best of the rest’ spot of seventh, and being surprised that his pre-race prediction at least one of the ‘big six’ drivers would hit trouble did not come true, he entertaining himself by going after the fastest lap, over the objections of his team:

Kevin Magnussen had the last laugh, however:

Even after 61 gruelling laps of Singapore, Hamilton’s didn’t forget to stay on-brand:

But Grosjean was still fuming: