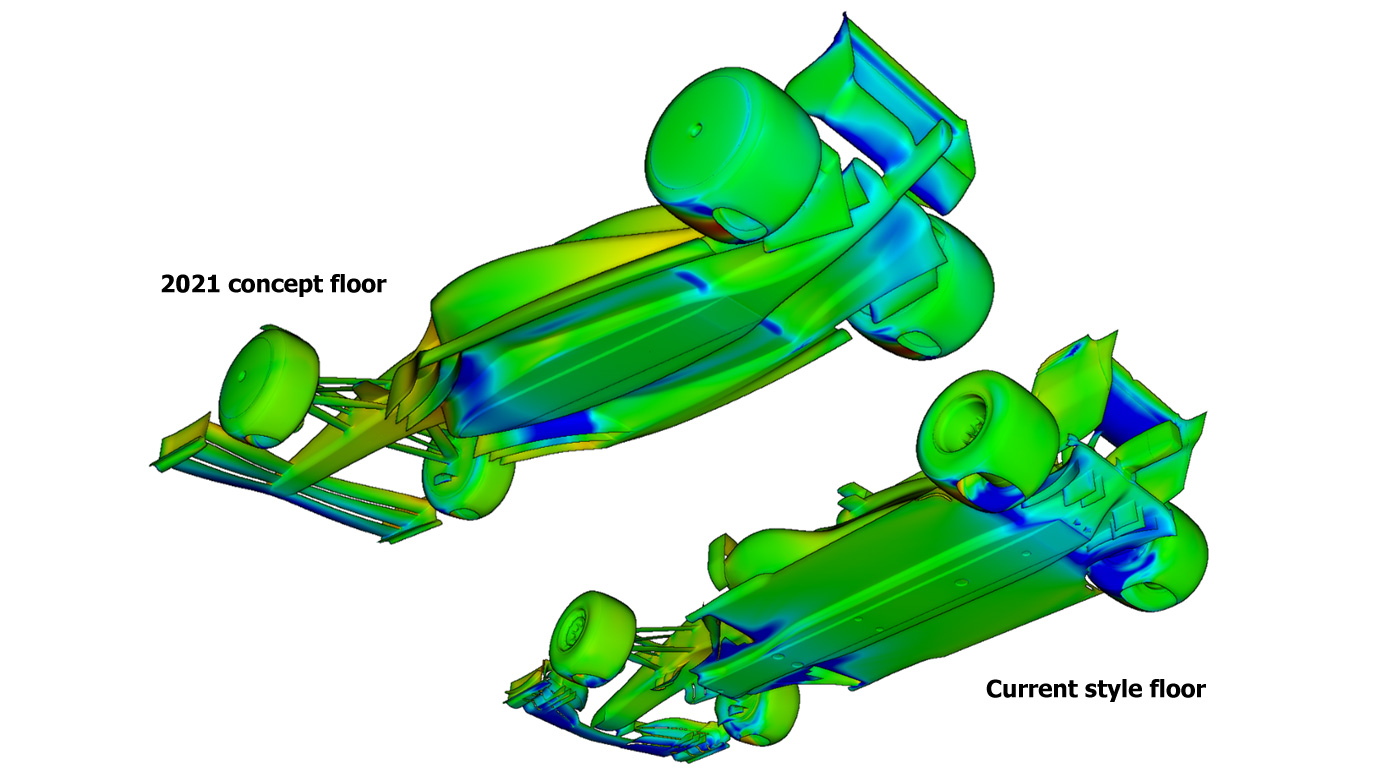 Formula 1 will reintroduce ‘ground effect’ aerodynamics in 2021, a change the sport’s technical directors believe will make a “massive” difference to how easily cars can follow each other.

The concept image above, produced earlier this year, illustrates the style of the changes planned for the underbody of F1’s new cars in 2021.

Current Formula 1 cars generate much of their downforce from upper surface aerodynamic components such as wings and bargeboards. Teams have been required to use largely flat floors since the early eighties, when ‘ground effect’ aerodynamics led to a sudden increase in cornering speeds.

The sport’s technical directors intend to change the balance between the two in 2021. Upper surface aerodynamics will be simplified and teams permitted to use ‘venturi’ tunnels in their floors which extend along the full length of the sidepods.

The FIA’s head of single-seater matters Nikolas Tombazis said the purpose of the changes is to make it easier for a following car to stay close to a leading car.

“The first part of the objective is to improve the wake [from] the front car so the rear car doesn’t suffer so much performance loss,” he explained.

“As an indication, current cars two car distances behind front car may lose almost half of their downforce and that makes it much more difficult to follow closely and creates a situation where you destroy the tyres much more easily, for two reasons. One is because the cars slide more and hence they destroy the tyres and secondly because obviously adding more turbulence and slow-moving air the tyres and the rest of the car don’t cool down as they do otherwise.”

The return of ground effects will work with another significant change on the 2021 cars. New bodywork pieces above the front wheels will improve the wake from a leading car, also helping a following car to stay much closer.

However the FIA expects the teams’ pursuit of performance will erode some of these gains.

“We are aware that when development takes place from teams – who don’t care about what the following car performance is, they just care about the front car – that that may negate some of these gains and that it’s our task to make rules that try to prevent that as much as possible.”