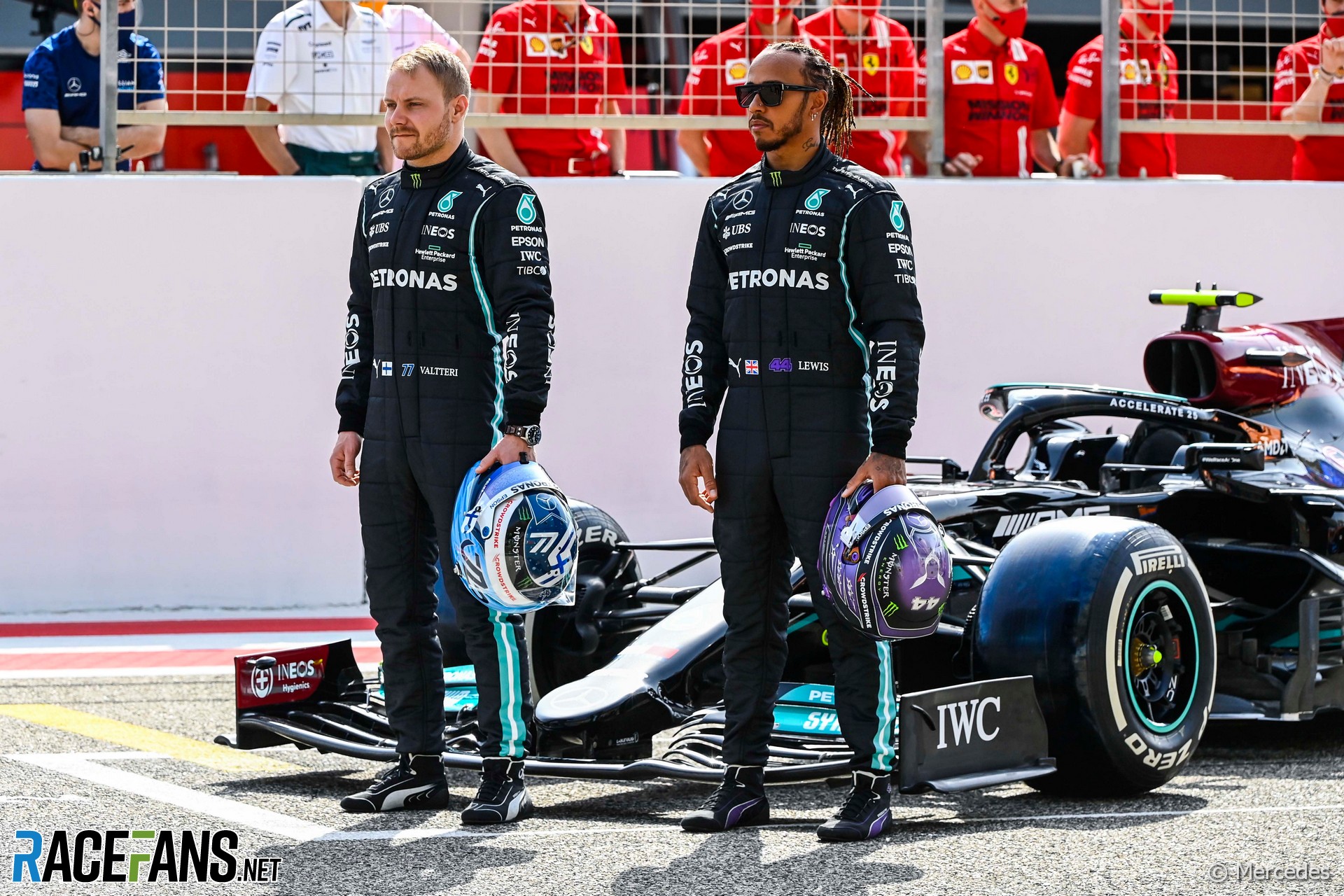 Last year, while Formula 1 fans thrilled to the second instalment of Drive to Survive, another acclaimed Netflix documentary told the story of a fascinating chapter in the history of basketball.

The Last Dance explored how Michael Jordan and the Chicago Bulls’ seven-year near-total domination of the NBA in the nineties drew to a close. It’s a revealing study of what happens when a great sporting power is forced to confront the timeless truth that nothing lasts forever.

They won six titles in seven years. The parallel to Lewis Hamilton and Mercedes is almost too convenient. But as it proved for Jordan and the Bulls, so it will one day be the case for Mercedes and Hamilton. Could that day even come this year?

For a while last year it seemed Mercedes’ ‘dream team’ which dominated the V6 hybrid turbo era was starting to coming apart. Engine mastermind Andy Cowell departed. The futures of both Hamilton and team principal Toto Wolff remained uncertain for a long time. Eventually Wolff re-committed, as did Mercedes, albeit with a reduced stake.

Question marks remain over the future of Valtteri Bottas, who Hamilton has always been quick to praise, after a less than stellar showing when George Russell made a one-off appearance as his team mate last year.

As for Hamilton, he is in the rare position of having almost nothing new left to win in Formula 1. He has already won more races and set more pole positions than anyone else, and the chances are high he will become the first person to rack up centuries of each this year.

He goes into the 2021 F1 season as hot favourite to win the title for a record-breaking eighth time. He’s insisted that won’t be “a deciding factor” in whether he continues. But what will?

The saga of Hamilton’s Mercedes contract negotiations over the past 12 months fed an expectation that he’s planning to hang up his helmet. Discussions around his latest deal were repeatedly postponed as first the pandemic delayed the start of the season, then the championship fight became his focus and, shortly after the title was won, Hamilton was laid low by Covid-19.

Finally, he agreed to extend his contract with Mercedes by a single season. Team principal Toto Wolff indicated at the time this was a case of kicking the can down the road for another year, and that they would begin talks on “2022 and onwards” earlier in the new year. However Hamilton subsequently indicated he is only considering further one-year extensions rather than another multi-year deal.

Is the opportunity to spend more time on his other interests – such as music, fashion and his passionate advocacy of diversity and equality – luring Hamilton away from F1? Wolff insists he has “no doubt about his commitment” to the sport and believe he still “enjoys racing a lot”.

“We enjoy working with each other and we discussed that a lot. But he’s absolutely right. The times change. [There’s] new priorities for all of us in terms of the way we live, our health. And he’s very passionate about his initiatives against racism and inequality.”

For much of the past seven years Mercedes have been in an almost unapproachable position. Hamilton has converted that into six world championship wins.

The sport has responded to this by trying to level the playing field. A budget cap has been introduced for the first time this year – a driver salary cap may follow in future seasons, which would hit Hamilton, believed to be F1’s top-paid driver by far, the hardest.

This year, for the first time, Mercedes have been permitted less aerodynamic development time than their rivals, as a consequence of their latest championship victory. Further success this year will result in an even lower limit next season.

F1 will also introduce a radical new generation of cars next year which it hopes will reduce scope for teams to vastly out-develop their rivals. It all points to Mercedes’ domination of F1 coming to an end.

Is that when Hamilton will take his cue to leave? Wolff thinks not. “We have this massive regulatory change in 2022 that’s going to reshape what Formula 1 will be for the next few years. I don’t think that this plays a role, to be honest.

“I think it’s fair enough for a driver that has won seven championships to give himself the flexibility in his mind to decide what he wants to do in the future. Whether this is racing or outside of the circus.”

Hamilton insists “I still love what I do” in F1 and he is “fully invested in this season and in delivering”. But much like last year, he indicates a decision on his future isn’t likely to come until the second half of the season.

“I’m in the fortunate position that I don’t have to commit to multiple years. So I chose to have a one-year deal then I could see how the year goes and where we’re at mid-year or towards the end of the year – who knows whether we will still be in a pandemic. But it doesn’t mean I’m not still very, very committed to the sport.”

As things stand, Mercedes appear to have a tougher fight on their hands from Red Bull this year. If that is indeed the case, and Hamilton is about to embark on a year-long scrap for the championship with Max Verstappen, his focus may not be on signing a new deal any time soon.

However there are signs he is beginning to think about his life after Formula 1. He intends to start making use of the £18 million home he bought in west London four years ago, though he stressed that “currently I’ve no plans of changing where I live.

“I live in a dream place that all the other drivers live in Monaco. I do have a home in England, which I’m really, really excited to be finished so [that] when I do come to England, I have finally a place to call my own rather than stay in hotels, which is never particularly enjoyable considering that’s what we do a lot through the year.

“So I think it’s a start of something great… a place that I [will] naturally have my family come to and maybe in the future have a family [of my own].”

As Wolff says, Hamilton and Mercedes are well aligned in terms of their priorities for widening participation in Formula 1 among under-represented groups. His latest contract announcement was accompanied by news of a new foundation established by the two to promote diversity and inclusion across motorsport.

This, as much as their continued success, make it hard to see Hamilton being tempted to join Ferrari or another top-line rival who might afford him. But the upshot of his latest one-year deal is he faces another 12 months of being asked when he will firm up his plans for the future.

“It’s not like it’s my first rodeo,” he said. “I’ve been in this position where I’ve been asked the question for a period of time. So I don’t really feel pressured in that sense.

“Naturally I continue to have a huge belief and an always bet on myself in terms of I know what it takes to deliver and I think I have an extraordinary relationship with Mercedes that’s incredibly deep, and I think there’s more than just this racing that we will probably end up doing together, as you’ve already seen with this foundation.

“There’s a lot of great things that we can do moving forward. So that will be a constant discussion through the year, I’m sure. In terms of whether I want to – whether this is where I want to continue, if this is the road I want to continue down – it will come to me I’m sure.”

Exactly when it will come to him is a question his millions of followers will be eagerly awaiting news of. And, of course, the sport itself, for as the 2021 season begins there is absolutely no doubt he remains Formula 1’s top draw.

25 comments on “Is Hamilton starting his final F1 season? Why this may not be his ‘last dance’ with Mercedes”