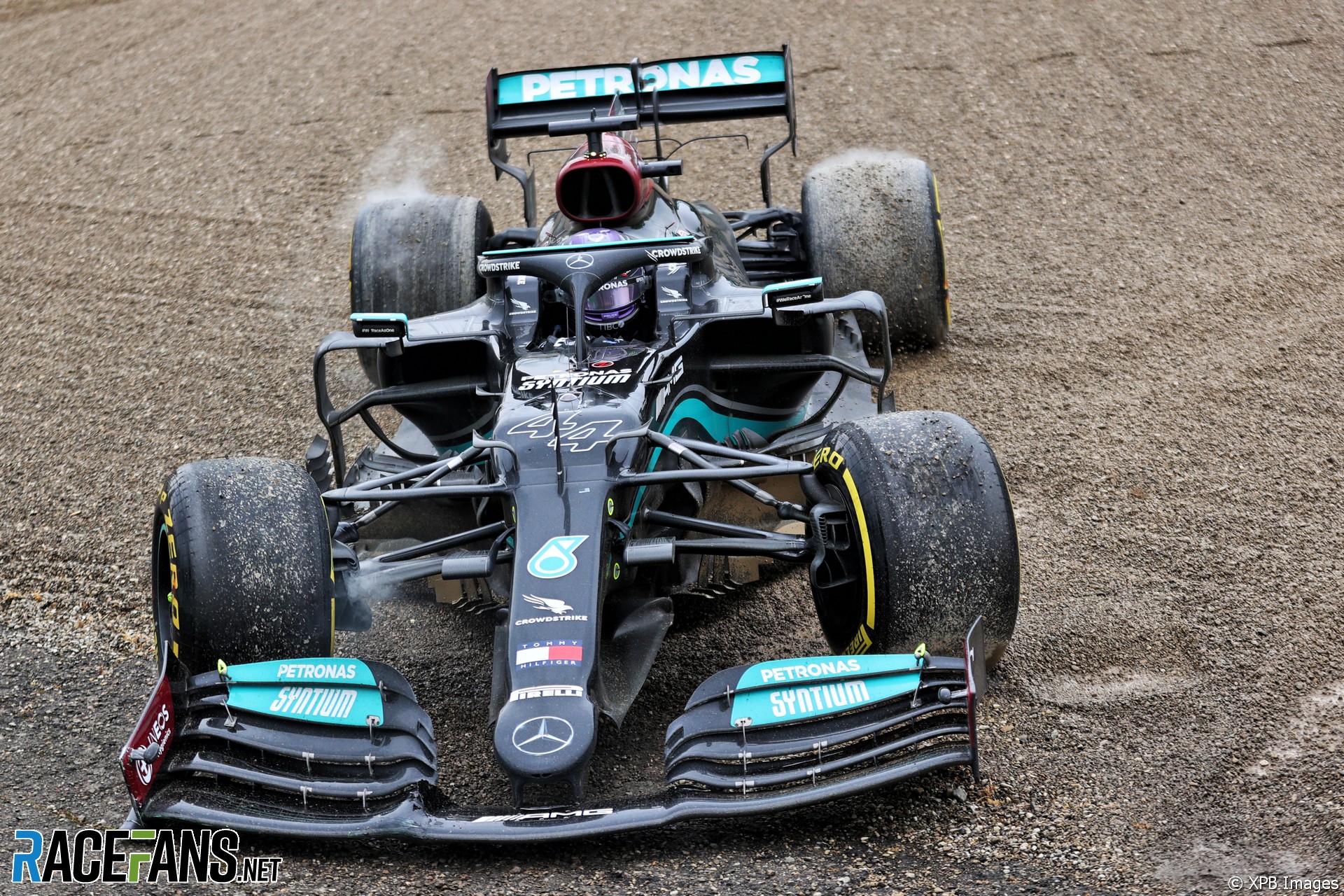 Lewis Hamilton was “really grateful” that he was able to get his Mercedes out of the gravel and to the chequered flag after crashing in the Emilia-Romagna Grand Prix.

The incident occured during his pursuit of race leader Max Verstappen. Hamilton was lapping Williams driver George Russell at the Tosa hairpin, but skated off-track, nudged the barrier and came to a halt in the gravel trap.

The world champion was able to keep his engine running and reverse back onto track. However a broken front wing from the crash meant a pit stop was required, which cost him a lap and left him down in ninth place.

“On my side, it was not the greatest of days,” admitted Hamilton. “First time I’ve made a mistake in a long time, but I’m grateful I was able to bring the car home still.

“There was only one dry line, and I guess I was in a bit too much of a hurry to get by everyone. Coming to the inside I could see it was wet and I was trying to stop, but the thing wouldn’t stop, and it sent me off.

“A bit unfortunate, but I’m really, really grateful that we got to get going again, and to get some points for the team was really important.”

The mid-race stoppage, due to a major crash involving Russell and Valtteri Bottas, allowed Hamilton to rejoin the lead lap. He was able to charge back up to second place in the restarted race.

Hamilton says he “wasn’t thinking” about a potential recovery during the time the race was stopped, instead examining the damage to his car.

“I was just trying to get over the gutting kind of feeling it is when you make a mistake, and just moving on from it,” said Hamilton.

“Just learning from it real quick, you don’t have time to dwell on it so that’s what I did, get back into racing spirit. I didn’t know whether or not we would be able to overtake because offline was going to be wet, but still had some really good, fun battles with all the guys.”

Russell admitted he could have chosen a better place to let Hamilton pass him, but said he was trying to let the world champion through as quickly as possible.

“I gave him all the room but I probably should have let him through in another place,” said Russell. “I was doing my best.

“I got the blue flag, let him past at the earliest possibility, but that was the wettest corner on the track. So really unfortunate for him and sorry for him. One of those things. I thought I was doing him a favour by getting out at the earliest moment and obviously didn’t.”