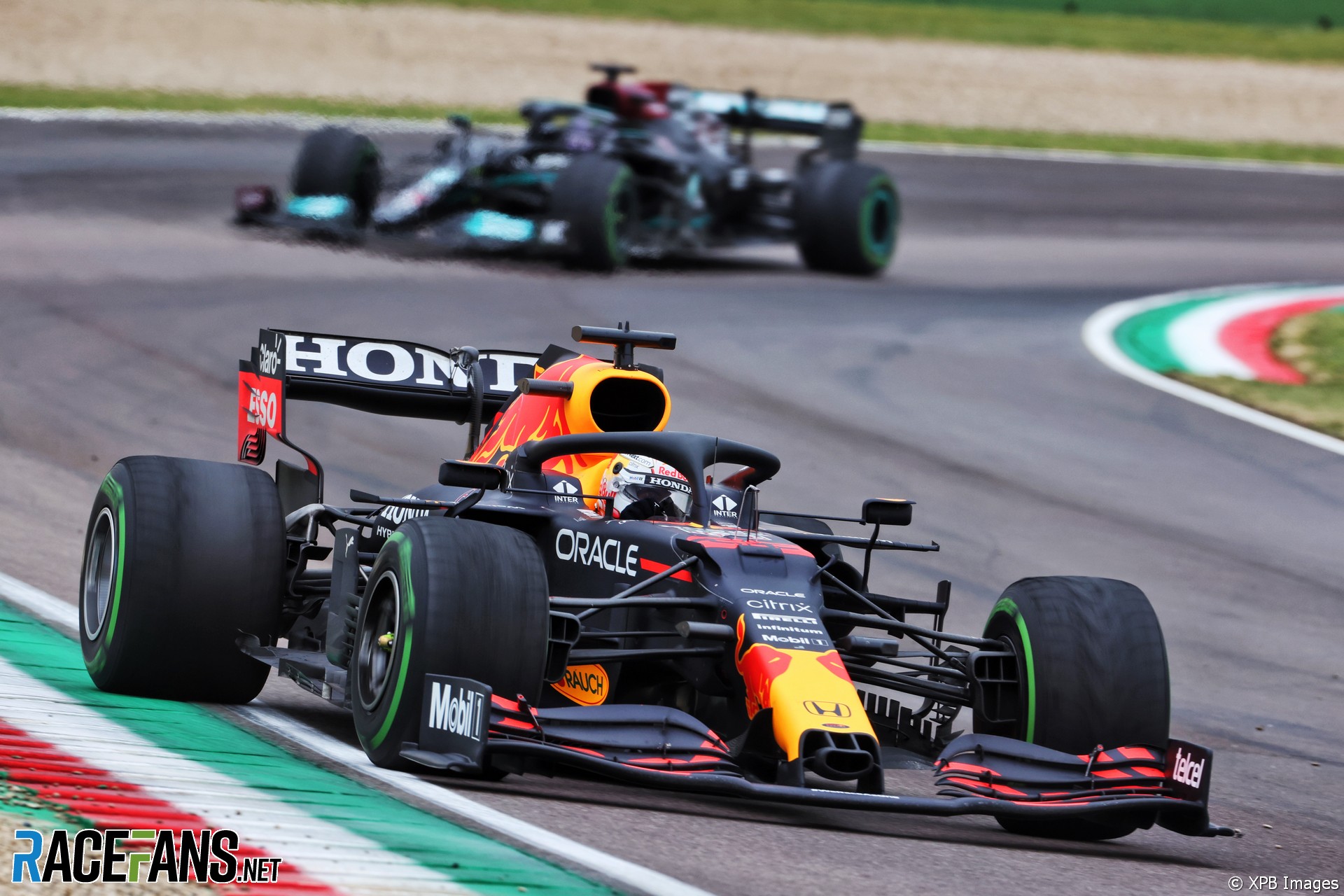 Max Verstappen dominated the Emilia-Romagna Grand Prix, a race which was split into two by a huge crash.

Mercedes’ Lewis Hamilton started from pole on a wet track, but was passed by Verstappen on the run to the first corner and immediately lost time in the spray of the new leader.

The gap between them stabilised after a few laps and they were closely matched on pace through the first stint on the intermediate tyres before Verstappen became the first of the frontrunners to switch to dry tyres.

Hamilton had been closing in prior to that but a slow pit stop for him undid his work reeling Verstappen in, and then while navigating lapped cars a few laps later he went off the track.

The resultant time loss and second pit stop put him a lap down too. But shortly afterwards an enormous crash between his team mate Valtteri Bottas and Williams’ George Russell brought the race to a halt. Both fortunately emerged from the collision rattled but well enough to blame each other for the contact.

That freed up teams to switch tyres again, as well as enabling all of the lapped drivers to be brought back onto the lead lap. That included Hamilton, and in the restarted second half of the race he charged his way from ninth to second place.

McLaren’s Lando Norris finished third after his team gambled on putting him on soft tyres at the restart, holding off pressure for a long time from Ferrari’s Charles Leclerc and Carlos Sainz Jnr just behind him.

Daniel Ricciardo also put on softs in the second McLaren and finished sixth, just ahead of Aston Martin’s Lance Stroll who had to contend with gear shift problems.

Despite starting on the wet tyre on a drying track and falling down the order early on, AlphaTauri’s Pierre Gasly recovered to eighth place. Alfa Romeo’s Kimi Raikkonen and Alpine’s Esteban Ocon completed the points positions.

Sergio Perez, who qualified second in his Red Bull, suffered a difficult race with more than one off-track excursion, and finished 12th between Alpine’s Fernando Alonso and AlphaTauri’s Yuki Tsunoda, who started from last place.

Sebastian Vettel was in contention to beat Tsunoda before Aston Martin asked him to retire his car due to gearbox problems. He had already served a 10-second stop-go penalty as his team did not have his tyres fitted on the grid before the five-minute warning.