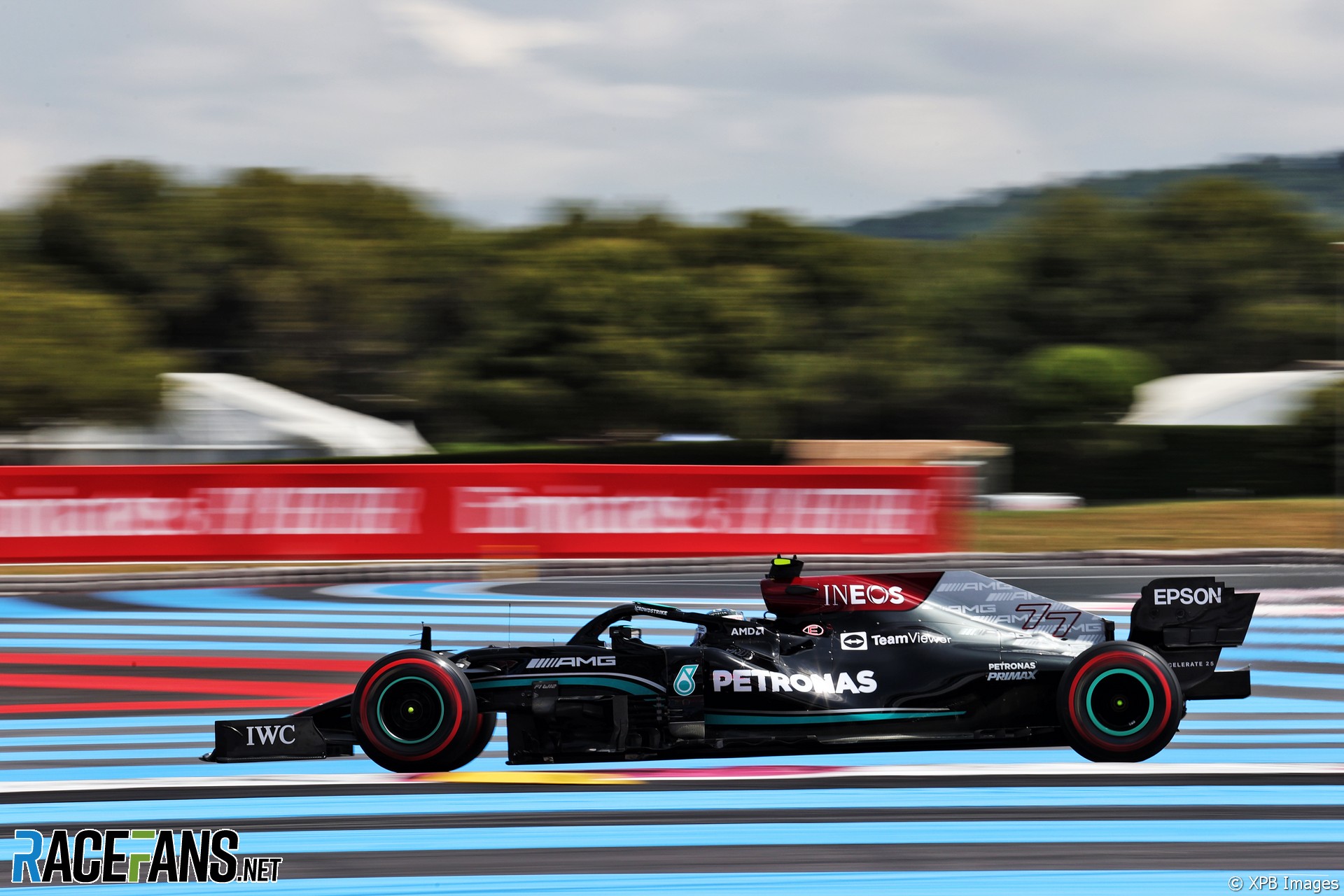 Valtteri Bottas led a one-two for Mercedes in the first practice session for the French Grand Prix.

He ended the opening hour of running three-tenths of a second faster than team mate Lewis Hamilton. The pair swapped chassis ahead of the seventh round of the championship and Paul Ricard.

Bottas’ lead time was set in the first half of the session, as were most drivers’ fastest times. Hamilton had been heading for what looked like a late hot lap towards the end of the session but pit lane confusion caused Yuki Tsunoda, attempting to avoid another car, to slightly obstruct the Mercedes.

Max Verstappen, who set the third-fastest time, complained later in the session he had damaged his floor running over a red-and-white kerb at turn 15. The championship leader radioed the Red Bull pit wall to say he had been forced to back out of the lap he had been on.

Paul Ricard’s open nature is largely limited by bollards and kerbs, the latter of which fell foul of several teams. Early on in the session Mercedes’ team manager Ron Meadows was heard contacting Michael Masi in race control, saying that the yellow kerbs beyond the limits of turn two had caused damage to Bottas’ car.

“Those yellow rumble strips on the exit of turn two have done an awful lot of damage to our car” he complained, saying that running two or three feet wide would cost them “tens of thousands” of dollars.

Verstappen’s floor damage may have hindered him attempting another run. Meanwhile Alpine had the edge on the midfield in the opening session. As at Autodromo do Algarve Esteban Ocon was up with the fastest cars, beating McLaren and Ferrari, taking fifth behind Sergio Perez.

Several drivers had minor offs or lockups. Turn two seemed to cause the most significant problems. Sebastian Vettel appeared to be caught out by a gust of wind there and was sent into a spin that saw the rear of his car make contact with the barriers. He was able to get his Aston Martin going again and return to the pits without a major disruption to the session.

Carlos Sainz Jnr had an almost identical incident later in the session, although was able to avoid the barriers and limped his Ferrari back to the pits with only flat spotted tyres to show for his spin. The wind was changeable and strong during the session, blowing directly across turn two at points.

Daniel Ricciardo was faster than Lando Norris, with AlphaTauri looking roughly on the pace of the McLaren and Alpine cars. Ferrari, meanwhile, seemed to have slipped back down the pack from their impressive Monaco and Baku pace.

Roy Nissany, who took over George Russell’s Williams car for the session was slowest of any driver.