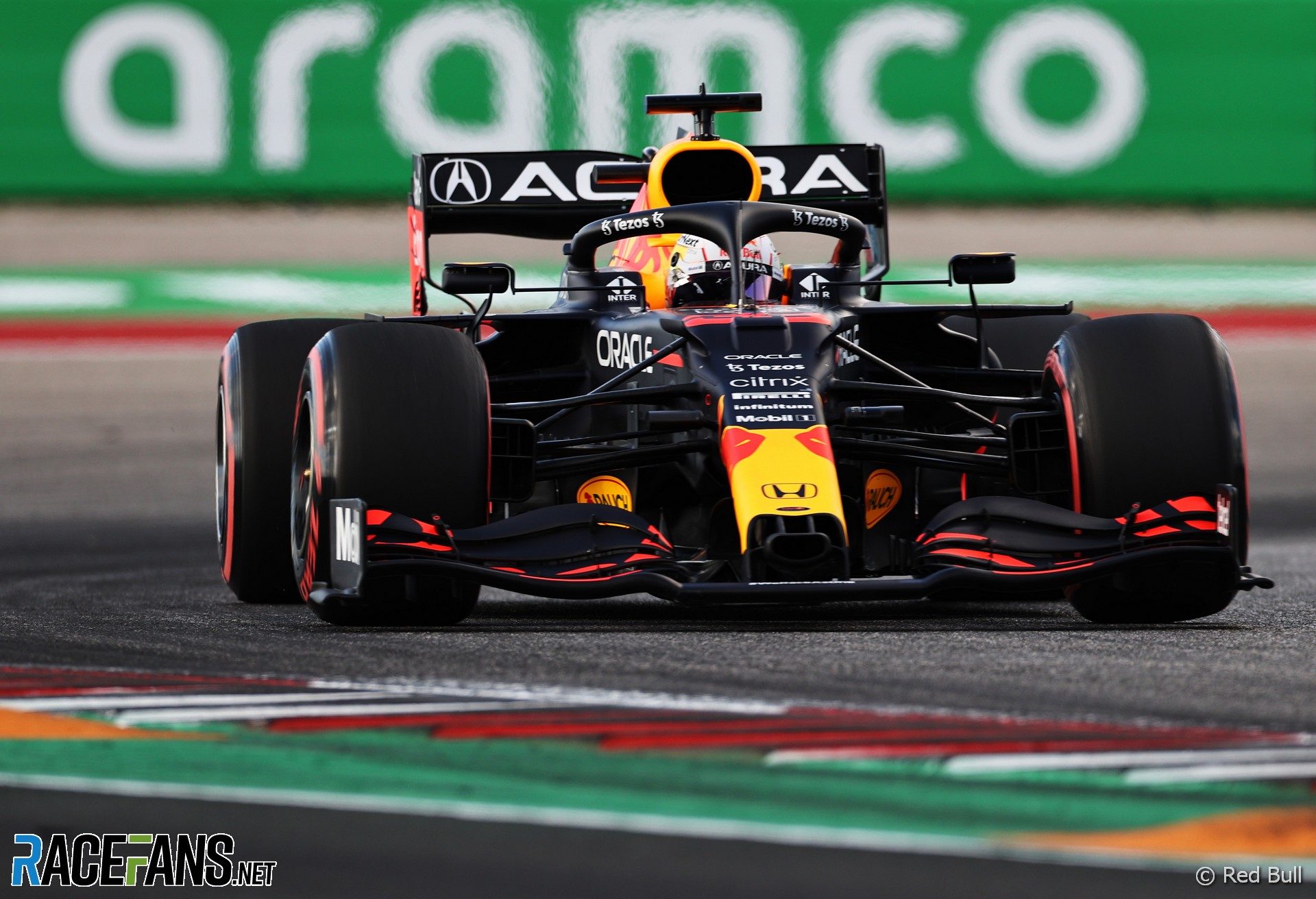 Max Verstappen will start the United States Grand Prix from pole position ahead of his championship rival Lewis Hamilton.

The pair moved to the front with their final runs, demoting Sergio Perez who had taken provisional pole position at the beginning of Q3.

Valtteri Bottas qwualified fourth but will start ninth after his engine change penalty.

It was soft tyres all around in Q1. Charles Leclerc set the initial pace but Max Verstappen was quick to emerge from the pits and displace the Ferrari driver by more than three-quarters of a second. He was backed up by team mate Sergio Perez, just five-hundredths of a second away.

The Mercedes drivers couldn’t match the Red Bulls through the sector one on their first laps, but along the long back straight Valtteri Bottas was quicker. A decent final sector left him a tenth of a second down at the line. Hamilton was over a tenth of a second slower than his team mate, losing quite a bit more time in the middle of the lap.

Then the McLarens produced a surprise. Daniel Ricciardo, having traded the 1984 Chevrolet NASCAR he demonstrated before final practice for his regular MCL35M, pumped in a 1’34.407, including the fastest run through sector one, to displace Verstappen from the top of the times. Lando Norris narrowly failed to beat Verstappen’s mark and moved into third.

Underlining the fact the track was improving rapidly, and that the midfield is getting quicker all the time, Carlos Sainz Jnr put his Ferrari fourth. Leclerc had by now fallen to ninth behind Pierre Gasly, whose AlphaTauri was finally showing a bit of pace.

Still on his original set of soft tyres, Verstappen reclaimed the top time with his fifth lap, a 1’34.352 putting him five-hundredths ahead of Ricciardo. Perez then split the pair to restore a Red Bull one-two.

By now the Mercedes drivers had sunk to sixth and seventh, and returned to the track for an extra run, still on their original tyres. All this accomplished was a one-place improvement for Hamilton – at the expense of his team mate.

Nicholas Latifi escaped the drop zone with his final run but Esteban Ocon’s last-gasp improvement pulled him back in, ensuring another Q1 exit for the Williams driver. Ocon’s team mate Fernando Alonso also got through with his final effort, ending Lance Stroll’s involvement in proceedings. Kimi Raikkonen, almost four-tenths off his team mate, also went no further, and the Haas pair were last as usual.

The majority of drivers in Q2 initially favoured the medium tyres, hoping to start the race on a compound which would go further than the fragile soft. Perez was among those to favour the soft, while team mate Verstappen plus the Mercedes and McLaren drivers opted for mediums. Ferrari split their strategy too, with mediums for Leclerc and Sainz on softs.

Verstappen was a third of a second quicker than Hamilton on the mediums, the pair topping the times initially. Perez slipped up, losing his lap time after straying beyond track limits at turn 19. The remaining runners piled in close behind Hamilton: Norris, Leclerc and Bottas all lapping within a tenth of him.

Three of the drivers who reached Q2 – Vettel, Alonso and Russell – were due to start from the back due to grid penalties. It appeared none of these wanted to risk making the cut for Q3 and therefore having to start the race on used tyres. So Alonso set a slow 1’47 lap time to ensure he’d line up ahead of them, Russell did an out-lap without setting a time and Vettel stayed put.

Perez switched to mediums for his final run and secured seventh. Ricciardo, who also lost his initial lap time due to a track limits violation, moved into ninth with his final run. He was comfortably safe from Yuki Tsunoda, who claimed the final Q3 spot in 10th, almost half a second slower than the McLaren.

Tsunoda made the cut at the expense of Esteban Ocon, who went out in Q2 despite being given a slipstream on the back straight by his team mate. Alonso also lost a place to Vettel, who came close to making the cut for Q3, setting a 1’35.500, just three-tenths off Tsunoda. Antonio Giovinazzi also went no further. Russell was last, his only lap being deleted for a track limits violation.

Red Bull kept their edge over Mercedes as the final runs began in Q3. The Mercedes pair set their times first but Hamilton gave away too much time in the middle sector. Bottas beat his time by a tenth, and the Red Bulls were quicker still.

Verstappen drove a fabulously committed lap, carving almost three-tenths of a second off Bottas’ time. But Perez, running a short distance behind, had fractionally more in hand, nicking the top spot off his team mate by less than two-hundredths of a second. On the way back in he told his team to leave the car’s balance alone. “Turn 11 is the limitation,” he explained, referring to the vital corner which leads onto the back straight.

As the final runs began teams warned their drivers there was a chance of rain arriving at turn one before the session ended. Bottas and Hamilton led the field around, Verstappen and Perez bringing up the rear of the 10-car queue.

Hamilton polished up his effort on his final run, planting his Mercedes back on the top of the times. With rain beginning to fall, Mercedes’ decision to send their cars around at the head of the field looked like it might be vindicated.

“It started drizzling at the end,” Verstappen told his team. “This was really, really good. Guys I think as a team also today we did a really good job. Nice turnaround from yesterday, the car was a lot better today so great job, guys.”

“Where did I lose all the time?” asked Hamilton. “A little bit one, a little bit seven and 19, 20,” said his race engineer Peter Bonnington.

Perez slipped to third ahead of Bottas, whose penalty will leave him ninth on the grid. The Ferrari pair came next, followed by the McLarens and AlphaTauris.