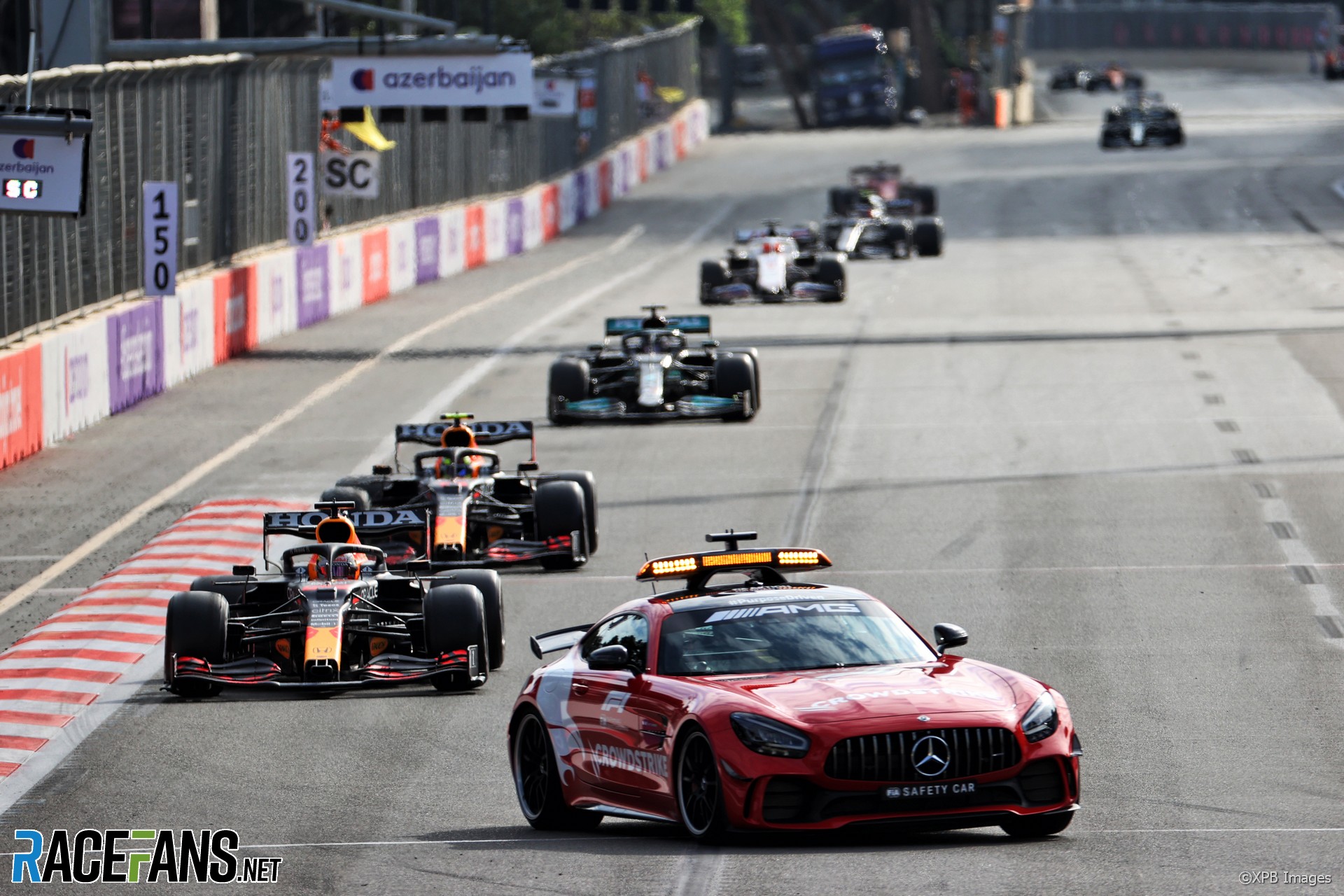 The finish of a race, naturally, is not just the most important part of the sporting event itself, it’s often the most exciting one.

As the stakes and the tension builds up over the laps, there’s nothing as exhilarating as a battle for a victory in the closing laps of a race – when the competition reaches its climax.

But, sometimes, fans are denied the opportunity to see a race winner decided under racing speeds. If there’s a severe accident or obstruction on the circuit in the final phase of a race, a late Safety Car can neutralise and effectively end a race before it has reached its total distance, leading to cars cruising around the track in order as they tick off the remaining laps until the chequered flag.

Not every major racing series is comfortable with this. For almost two decades, NASCAR have made use of their ‘overtime’ procedure – previously known as a ‘green-white-chequer’ – that extends the race beyond the advertised distance to try and ensure a race begins its final lap under a green flag at the very least.

IndyCar have also used red flag stoppages to suspend races and allow accidents to be cleared instead of running out of laps under caution, such as in the closing stages of the 98th Indy 500 in 2014. But IndyCar have not always been consistent in this, with Scott Dixon expressing his surprise that the 2020 Indy 500 was not red flagged in similar circumstances, denying him the chance to attack eventual winner Takuma Sato.

Over the last year, a number of high-profile incidents have led to fierce debate over how Safety Cars should be used in FIA world championships like Formula 1 and Formula E. The Azerbaijan Grand Prix was red flagged after Max Verstappen’s puncture, enabling a three lap sprint instead of those laps being spent behind the Safety Car. And there’s no need for reminders of what happened in the closing laps of December’s championship-deciding Abu Dhabi Grand Prix.

Even yesterday, while Formula E’s second race in Diriyah technically finished under green, it was only for the final corner of the race after the final nine minutes of competition time was spent under Safety Car conditions.

Whether you believe Safety Car finishes are acceptable or abhorrent is almost a question of you philosophy on racing: How much of an obligation do racing series have to provide fans – and competitors – with a flying finish under green flag conditions?

All FIA world championship races are scheduled to run over a finite distance, or to a maximum time. If a race is planned to be run over 60 laps, then whoever crosses the line first at the end of the 60th lap should be declared the winner – even if they do so behind the Safety Car.

If the FIA start introducing any requirement in their regulations that races have to finish under green, then that means the final laps of the race will be treated with a completely different approach than those before it. After all – no one ever objects to racing laps lost due to a Safety Car in the early phase of a race, even though the first ten laps can be just as important in determining an outcome as the final ten.

Safety Cars themselves are already enough of an artificial intervention on the natural ebb and flow of a race as it is: Competitors can gain or lose a huge number of places depending on the circumstances around when a Safety Car is deployed. Even minute-long gap between two cars can be wiped out in an instant as the car behind is allowed to suddenly catch up to their rival ahead. Add in the elements of compulsory tyre changes and how many factors teams must consider when deciding their strategies as it is, to go even further by forcing a green flag finish by any means is just one step too far.

Yes, racing is a competition – but it is also a spectacle. The reason why the infamous US Grand Prix of 2005 proved so controversial – even though the rules were technically observed correctly – was because having only six starters robbed the fans of the thrill of the enthralling race they had paid good money to see.

If motorsport was exciting enough to draw in viewers and keep them absorbed purely through watching drivers lapping the circuit for nearly two hours, then there would be no need for RaceFans’ ‘rate the race’ polls after every grand prix. But, as fans, we want to see racing – surely it is preferable to have a racing finish guaranteed than be denied what could be a thrilling climax just because an accident takes place at the most inconvenient time?

There’s also a case from a competition standpoint. A grand prix is just over 300km, but a late Safety Car could effectively mean a result is decided at with 10, 20 or even 30 kilometres remaining. Is it right that a driver is denied an opportunity to attack a leader for a potential race victory, just because the final five laps or so must be wasted because of the appearance of the Safety Car?

It’s hardly a surprise, but the ideal solution likely lays somewhere between the two extremes of this debate.

Accidents and hazards can occur at any time in motorsport and, as always, safety absolutely must be the priority. The Safety Car should be used without any hesitation from race control, no matter the race circumstances or external factors that could be in play. If there’s an accident that needs substantial clearing and marshals require a neutralised field to do so, then the Safety Car should be called no matter how much time or how many laps remain.

You could argue that ‘protecting’ the final laps of the race over and above earlier phases of the race is arbitrary and wrong, as, after all, the leader’s total race finish time is a sum of every lap they completed along the way. But time is linear – when it comes to use race-watching humans at least – and any incidents or delays in the early laps of the race can matter far less, purely because there is so much of the race remaining where anything could still happen and the state of the race could turn on its head.

In the final 50kms or so, every overtake, mistake and collision becomes more critical and neutralising a race under a Safety Car prevents those kinds of race-changing moments from being able to happen. It’s also true that if a race is neutralised or even stopped with a handful of laps left, wiping away the existing gaps between competitors, the order the drivers will be in will be a direct result of everything that has come before it. Yes, restarting a race with a three lap sprint might change the final results compared to if the cars had simply ticked them off under caution conditions. But at least then, the final results will be taken from the completion of the final scheduled lap – not from four, five or six laps before it.

Having a requirement in the rules for races to finish with a green flag feels like a step too far – but that doesn’t mean that there’s no merit in trying to reasonably ensure races don’t end in anti-climatic fashion with drivers forced to crawl around each other, just to reach a set number of laps.

The finish of the Azerbaijan Grand Prix was perhaps a positive example of how Formula 1 and other FIA world championships should approach this in future – making use of red flags to stop the clock, allow the circuit to be made safe and then resume until the final lap is completed naturally under racing conditions. Of course, some drivers will miss out in those circumstances and others will benefit from opportunities they otherwise wouldn’t have had, but at least it will have been determined on the track.

Lucas di Grassi argued that Formula E’s current rules around race time extension needed “fine tuning” and that’s an agreeable stance. Maybe Formula 1 would also benefit from reviewing its current red flag and Safety Car rules and revise them to encourage more racing finishes while also preventing it from being too much of a wildcard that would make things fundamentally unfair for its competitors.

Ultimately, as with any question of rules, the key is consistency. Whatever Formula 1 and its teams decide they want from the use of Safety Cars and encouraging racing finishes, it needs to be applied the same way in every race – from the opening round to the championship finale.

Do you agree that races in FIA world championships should be allowed to finish under Safety Car conditions?

144 comments on “Poll – Should FIA world championship races be allowed to finish under Safety Car?”