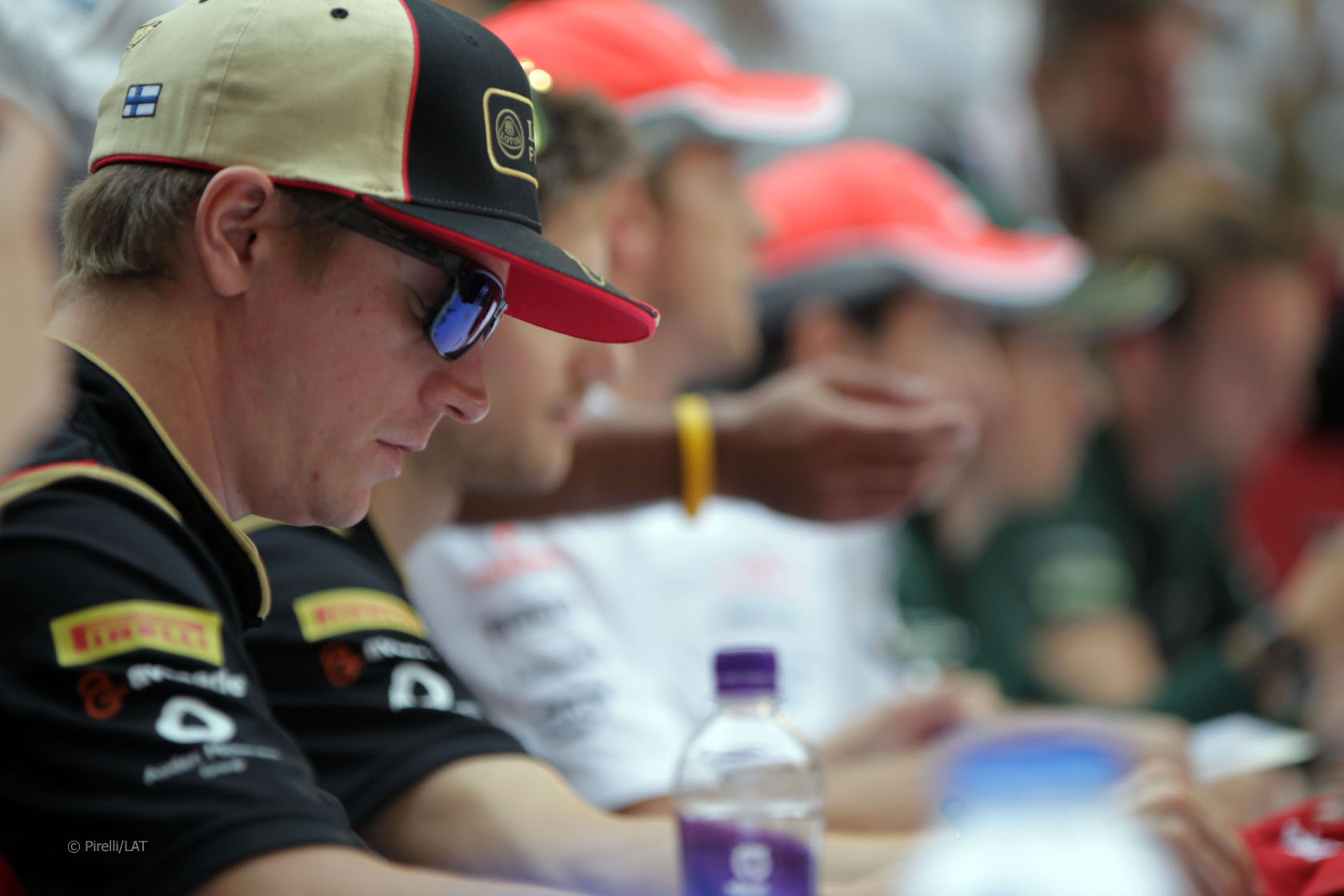 In the round-up: Bernie Ecclestone expresses sympathy for Kimi Raikkonen who hasn’t been paid all year. “He has signed a contract with somebody, they need to pay him. He now needs to do what he can to get paid. I feel sorry for him but he should have been a little more sensible when he signed the contract and know what he was signing for. If he drove for me, I’d have paid him.”

“A deal has been done for India to return to the Formula One calendar in 2015 and for six years beyond that if tax problems with the country’s authorities can be overcome, commercial supremo Bernie Ecclestone said on Saturday.”

“As a driver you want your performance to be the only argument, but it is different lately. Teams are under pressure as we are in tough times, so some teams take drivers with money rather than with no money.”

“The Mexican and New Jersey races that currently figure on the 2014 F1 world championship calendar will both be absent from the final version when it emerges from the FIA World Motor Sport Council in December.”

“In the last three or four races it was Felipe in front of me in qualifying, but in those races I finished in front and I have a lot more points.”

“Vettel is currently in the process of doing up the BMW R 51/3 his grandfather used to ride while a vintage Vespa is another restoration job.”

Mark Webber: “I think it?óÔéĽÔäós probably no super secret that I like the more flowing circuits but you have to put your heads down and get on with these types of circuits like Singapore and Abu Dhabi and do the absolute maximum and do the best.”

Nico Rosberg says #kimi not the only driver in F1 not getting his money. Let the games begin #f1

The stewards also investigated Perez for failing to slow for yellow flags, but were satisfied by his explanation and took no action. #F1

We can now confirm that a right-rear wishbone failed on Lewis' car. We hope to repair the damage under parc ferme.

Moving camera has been relocated from Alonso's car to Raikkonen's. Ferrari not happy with 'aerodynamic results' od having the camera onboard

Not sure how they are going to police track limits .Some cars are out of order should be fun to watch as a fan. Challenge for officials

@AdrianMorse is hoping for another battle between the two Red Bull drivers:

I really hope Webber doesn?óÔéĽÔäót fluff his start tomorrow. If he?óÔéĽÔäós leading after the first corner tomorrow and it?óÔéĽÔäós a one-stop race, it could be difficult for Vettel to beat him, even if he?óÔéĽÔäós the faster driver ?óÔéĽÔÇŁ which he usually is.

I haven?óÔéĽÔäót seen any of the long runs, but if many drivers are able to complete the race with only one step, then I don?óÔéĽÔäót see Raikkonen making much progress. If the norm is two and Raikkonen can comfortably do one, then he can make some progress, but even then the podium looks far without serious mishaps in the top ten.
@AdrianMorse

Graham Hill won the world championship for the second time 45 years ago today in Mexico.

His Lotus team also won the constructors’ championship, bringing them some cheer in a season in which they had lost the great Jim Clark.

Here’s a brief news clip with some footage from the race: