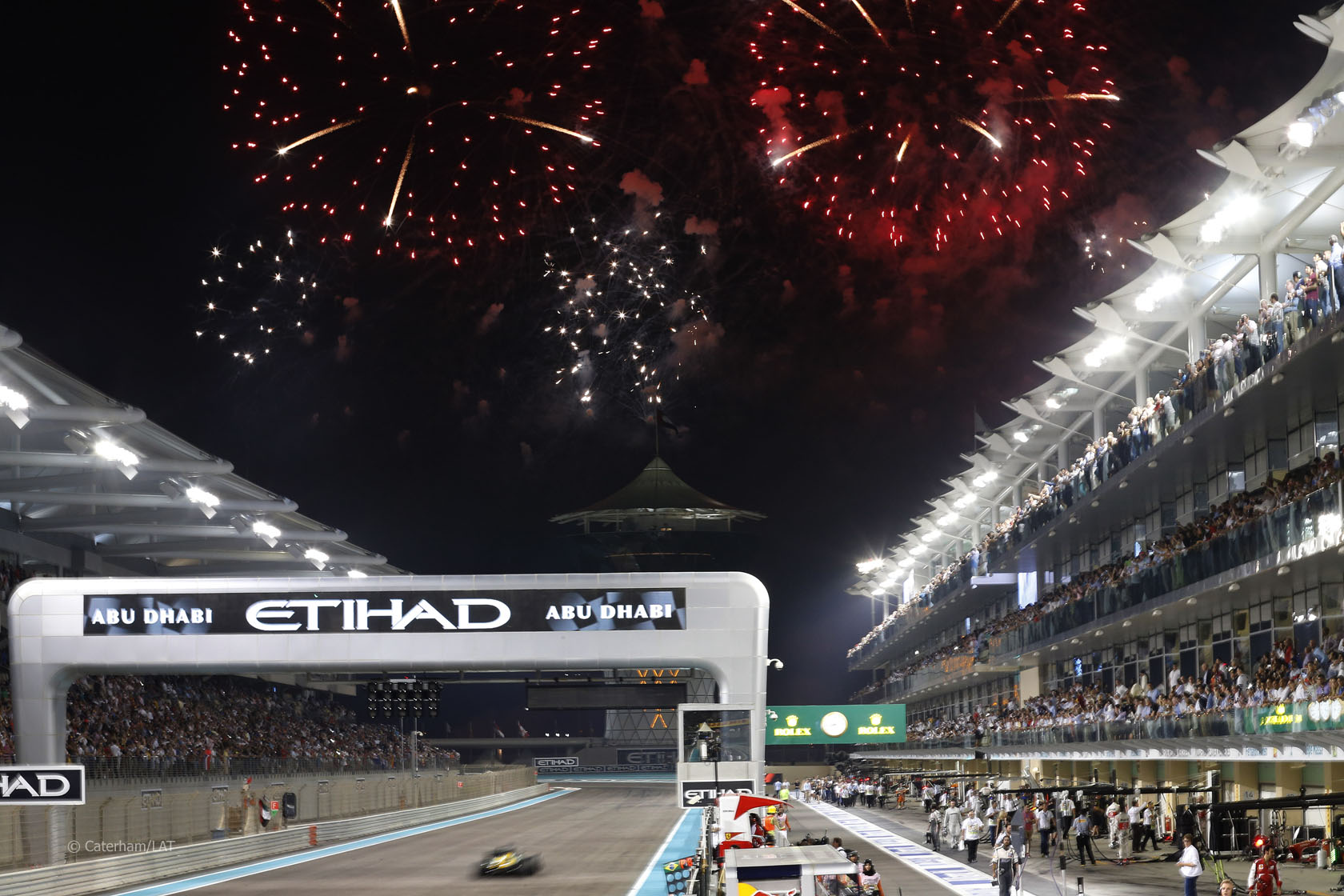 In the round-up: Tony Fernandes joins Luca di Montezemolo and Christian Horner in criticising the plan to offer double points at the last race.

“The double points is a fake fix. What’s better is to solve the issue and make the racing more compact.”

Cyruk Abiteboul: “Maybe we will have to address that as a collective issue of F1, because we need to be selling some dream.”

“Bernie Ecclestone succeeded in removing one of the legal threats hanging over him after the New York Supreme Court said it had no jurisdiction to consider a $650m lawsuit against the Formula One chief executive.” Read the full decision here (PDF).

“Max [Mosley] agreeing it was a good idea to grant those rights for such a valuably long time has caused the sport to be financially raped ever since. Without that, there?óÔéĽÔäód have been no need for the technical sterilisation of the sport (engine freezes, spec tyres, etc), the phoney ways of trying to please the new, less hardcore audiences or the ever-increasing presence of pay drivers on the grid ?óÔéĽÔÇŁ and more than half of the teams would not be in a financially perilous state.”

What may be going on now, and where this might be going (long, speculative and detailed) (A former F1 doc writes)

“The Daily Mail has done it again. With today?óÔéĽÔäós headline they?óÔéĽÔäóve ‘forced’ me to take to my blog to help clarify some of what?óÔéĽÔäós being said.” Referring to this article on Michael Schumacher’s condition.

“Once, humiliatingly, [Jackie] Stewart ?óÔéĽÔÇŁ pushing 60 at the time ?óÔéĽÔÇŁ took Jan for a driving lesson at Oulton Park and let it be known that he was the faster driver.”

Analysis: Ericsson is better than his GP2 record suggests (PaddockScout)

“Off the back of a lacklustre four years in GP2, it?óÔéĽÔäós debatable that Marcus Ericsson deserves his Formula One chance with Caterham on merit.”

A quick sharpie sketch of the #VJM07 nose pic.twitter.com/1A6U2zOPdO

Amusing how some are saying 'hey the new noses look OK after all' when we haven't seen one properly yet! #F1

Yes, for those of you asking if we'll be in Jerez next week…we will indeed. Can't wait to see the new #MR03 out on track! #lookinggood

@Marussia_F1Team It's a pleasure to work with you!

This is my home town. They made celebration for me! made this pic in one day! So quick but I don't like this design. http://t.co/tElcwBfIRu

Having a busy day at @CaterhamF1 . Simulator work and getting to know all the people in the team. So far it feels great! Bring on Jerez #F1

Only showing a profile view of the VJM07 was a cunning move by Force India but not everyone was fooled:

From the side it looks nice, but that nose cone it?óÔéĽÔäós never going to be pretty… It?óÔéĽÔäós such a shame, I loved the low nose cones of the late eighties, early nineties.

This shape, from the side, defines F1 cars. That?óÔéĽÔäós how I used to draw them as a kid… kinda like the 1994 Williams or 1990 Ferrari. Sad the front will inevitably look hideous.
@Fer-no65

Kimi Raikkonen prepared for his F1 comeback by testing a Renault R30 in Lotus colours in Valencia two years ago today.