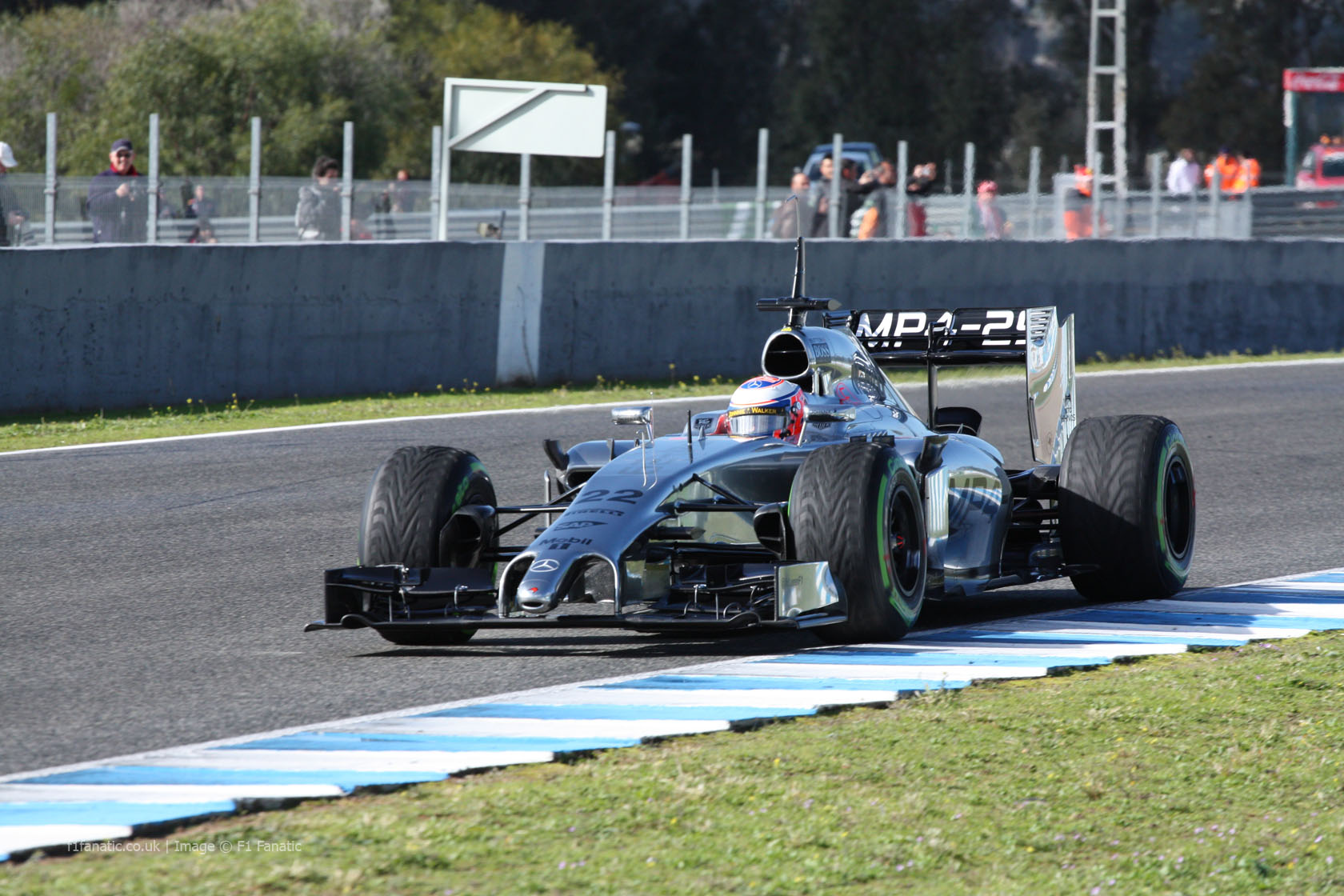 McLaren have bounced back from a difficult first day’s testing, in which they were unable to take to the track at all, by recording the quickest time of all on the second day of pre-season running at Jerez

Jenson Button recorded a 1m 24.165 to top the time-sheets and complete a healthy day’s running of over 40 laps in the new McLaren MP4-29. Mercedes too had a very productive day, with Nico Rosberg’s amassing a total of 97 laps – more than a race distance – over the course of the session without any major mechanical issues or failures.

But there were problems for the Renault powered machines as reigning world champions Sebastian Vettel and Red Bull had another day of very limited running after suffering an apparent energy recovery issue, while Toro Rosso failed to make it onto the track at all.

After overnight rain had left the circuit slightly damp, the decision was taken by the teams and Pirelli before the day’s running began to soak the track artificially in order to provide the teams with the chance to run on both the wet and intermediate tyres.

As day two of the test officially got underway, Button was first on circuit for the MP4-29’s first laps of Jerez. There was far more early running than on the opening day of the test, with Kimi Raikkonen and Esteban Gutierrez circulating in the damp conditions on the wet weather Pirellis. Vettel ventured onto the circuit for some very short runs in the RB10, before returning to the garage where he remained for the rest of the day.

The first red flag stoppage of the day came around 11:45 local time when Gutierrez pulled off circuit with an apparent mechanical failure after completing the most laps of any car up to that point in the day. Once the Sauber was cleared, Button ventured out on slick tyres for the first time and immediately set a lap more than five seconds quicker than the previous fastest time. He and former team mate Sergio Perez traded quickest times over the early afternoon, while Marcus Ericsson made his first appearance of the day in the Caterham for an installation lap.

Raikkonen’s Ferrari and then Gutierrez’s Sauber both rejoined the session after lengthy periods in the pit lane, but while Mercedes and Ferrari engines were hard at work, there was very little activity from the Renault-powered cars. News that Red Bull had suffered an apparent energy recovery problem meant that Vettel’s day was done having amassed a total of just eight laps – bringing the RB10’s total over two days to just 11 laps of running.

Meanwhile, Nico Rosberg’s Mercedes was having no such problems and achieved a run of over 20 consecutive laps before a mechanical problem for Perez’s Force India brought the Mexican to a smoky stop at turn one and the red flags for the second time in the day.

When the session resumed, there was a flurry of activity with Raikkonen, Rosberg, Bottas and Gutierrez all posting personal bests before yet more problems for Renault-powered Caterham as Marcus Ericsson’s CT05 ground to a halt in sector two with just over an hour and a quarter remaining.

Once the green flags flew once more, Button went out and immediately posted what would turn out to be the fastest lap of the day – a 1m 24.165. Rosberg continued with multiple lap runs, becoming the only driver to complete a race distance over the course of the day and ultimately completing 97 laps by the chequered flag.

With Ferrari and Sauber also logging over 100 laps between them for Ferrari’s new V6 turbo, the lack of mileage by the Renault-engined cars is even more striking, while Mercedes will likely leave the circuit today as the team most satisfied with their day’s work.