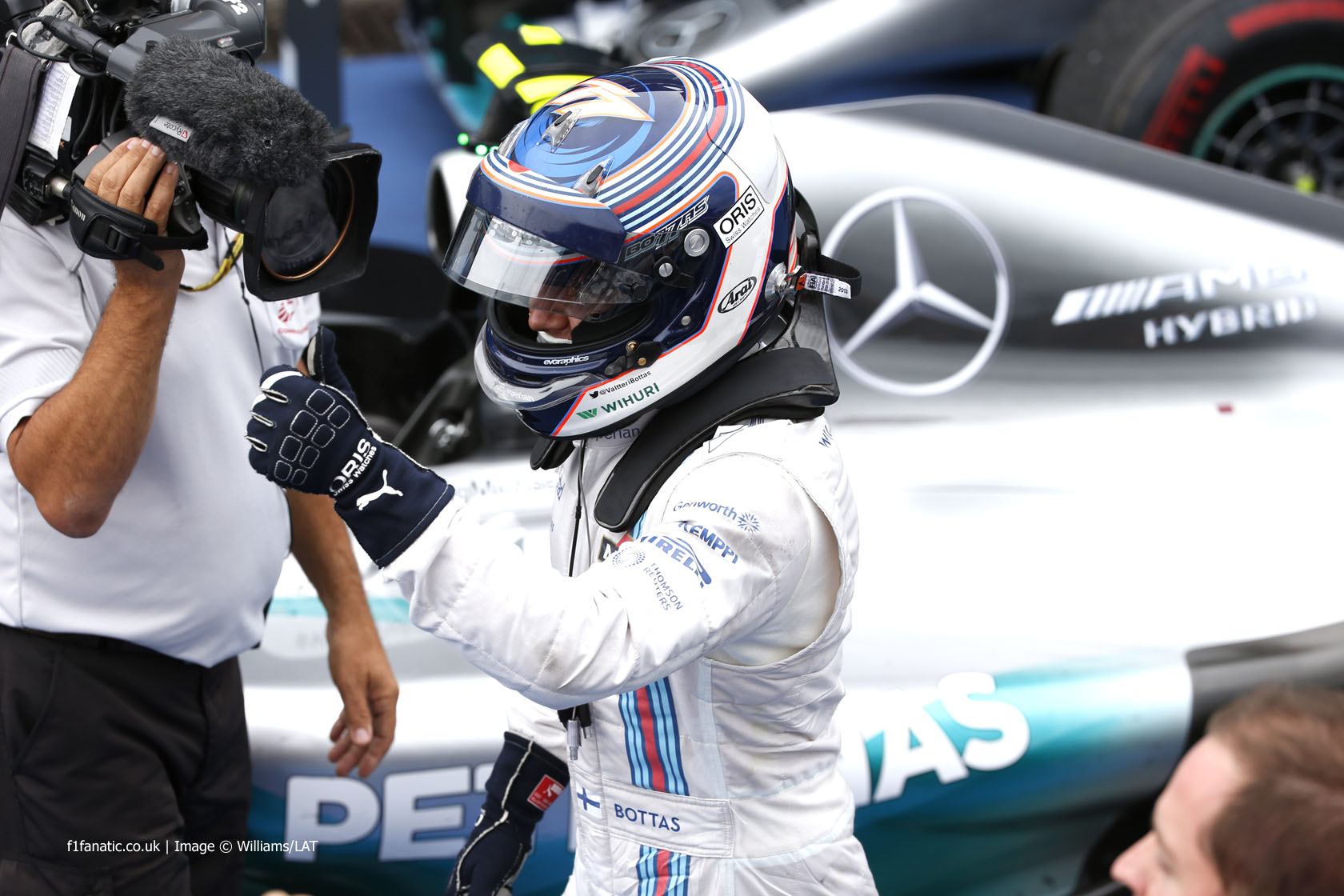 Another impressive performance from Valtteri Bottas in the German Grand Prix – in which he qualified and finished second – has earned him his third Driver of the Weekend win in a row.

It’s the first time any driver has headed three such polls in a row since F1 Fanatic began them in mid-2010.

Although he was aided by Lewis Hamilton’s qualifying woes, Bottas held off the faster Mercedes for eight laps. Hamilton ran him close in the poll as well – the pair were separated by little more than 3% of the vote.

Daniel Ricciardo placed third in the vote with 10.4% after having to make his own recovery drive following being pushed far off the track and down the field due to a collision between two other drivers at the first corner.

That also means that for the third race in a row the winner of the Grand Prix was not voted in the top three. Nico Rosberg was fourth in the poll he is still yet to win despite his four grand prix victories and championship lead.

With the removal of the FRIC systems a major talking point heading into the weekend, everyone was wondering who would be most affected, and following first practice it looked to be Williams.

They improved as the weekend went on however and when the opportunity arose for a non-Mercedes to start on the front row alongside Rosberg, Bottas duly took it, despite his only previous experience of Hockenheim being a rain-hit practice session two years ago.

He got off to a sluggish start but held onto second and as soon as team mate Felipe Massa retired and the racing restarted, he looked all but confirmed for a podium, with the only question being what position because of Hamilton’s recovering Mercedes.

That threat never arrived until the final eight laps however and Bottas placed his car perfectly to keep Hamilton at bay and take his third podium from three races.

He had a great qualifying and drove brilliantly to split the Mercedes in the end. He started well and did his best to keep pace with Rosberg while resisting a bit of pressure from Vettel and Alonso behind him.

After that he had a quiet race, but put in the laps needed to solidify his position. Towards the end of the race, on dying tyres, he did supremely well to fend off the faster Hamilton. He was cool under pressure, ensuring that he never went too defensive knowing that such an action would play in to Hamilton’s hands.

Great stuff and I’m looking forward to his inevitable first win. I just hope it’s this year and not later!
Colossal Squid (@colossal-squid)

He had very strong qualifying and his race was also faultless and solid, a maximum result that day. He stayed calm, looked after the tyres and even though he was meant to be “an easy catch” for Lewis in the last laps, didn’t panic and held second to the chequered flag.

All in all, I think this was the strongest weekend in general from Bottas during his Formula One career so far.
Fanatico (@Fanatico)

Bottas again. This was easily his best overall performance yet and its all the more remarkable considering that until FP2 he’d never done a dry lap around Hockenheim in his life. He had a belting qualifying and then ran a perfectly clean race before comfortably holding off Lewis. He made his weekend look very easy indeed, and that’s the mark of a true great.
Graham (@guitargraham)

All Hamilton needed heading into the German Grand Prix was a clean weekend, starting with an error-free qualifying session, but he never got it.

Brake failure in Q1 all but eliminated any hopes of beating his team mate in the race unless Rosberg had mechanical issues of his own as Hamilton looked set to line-up 15th. Matters got even worse however as he required a new gearbox following the crash, and duly started 20th.

A start nowhere near as impressive as his Austrian or British getaway – coupled with the early Safety Car ruling out any chance of easy overtakes on the opening lap – made Hamilton’s race even harder, but he set about in his usual battling form, performing a double overtake on Ricciardo and Kimi Raikkonen.

But a misjudgement passing ex-team mate Jenson Button damaged his front wing however and ultimately forced him onto a three-stop strategy, compromising any chance of passing Bottas for second.

I can’t blame him for the brake failure in qualifying but I can credit him for charging through the field. It wasn’t a simple “wait for DRS” type strategy; he was aggressive and you could physically see his determination. You knew how important this race was to him. Great effort all around.
Nerrticus (@nerrticus)

For once the qualifying error was nothing to do with him and apart for one mess up with Button he was brilliant, it goes to him. Was exciting throughout and went for gaps that other drivers wouldn’t go for, exciting guy, exciting race.
ADD (@addimaf1)

Ricciardo once again out-qualified team mate Sebastian Vettel to take fifth on the grid, but it was all for nothing as he had to take to the run-off at the start to avoid being involved in the Magnussen-Massa clash.

From 15th Ricciardo had it all to do but his progress mirrored that of Hamilton’s behind, as he sliced his way through the order.

An attacking three-stop strategy helped him gain yet further ground and he produced one of the highlights of the race in his battle with Alonso during the closing laps.

Ricciardo from me. A great recovery with heaps of overtaking after being compromised at the start of the race. The highlight was the battle with Alonso towards the end of the race.
Melchior (@melchior)