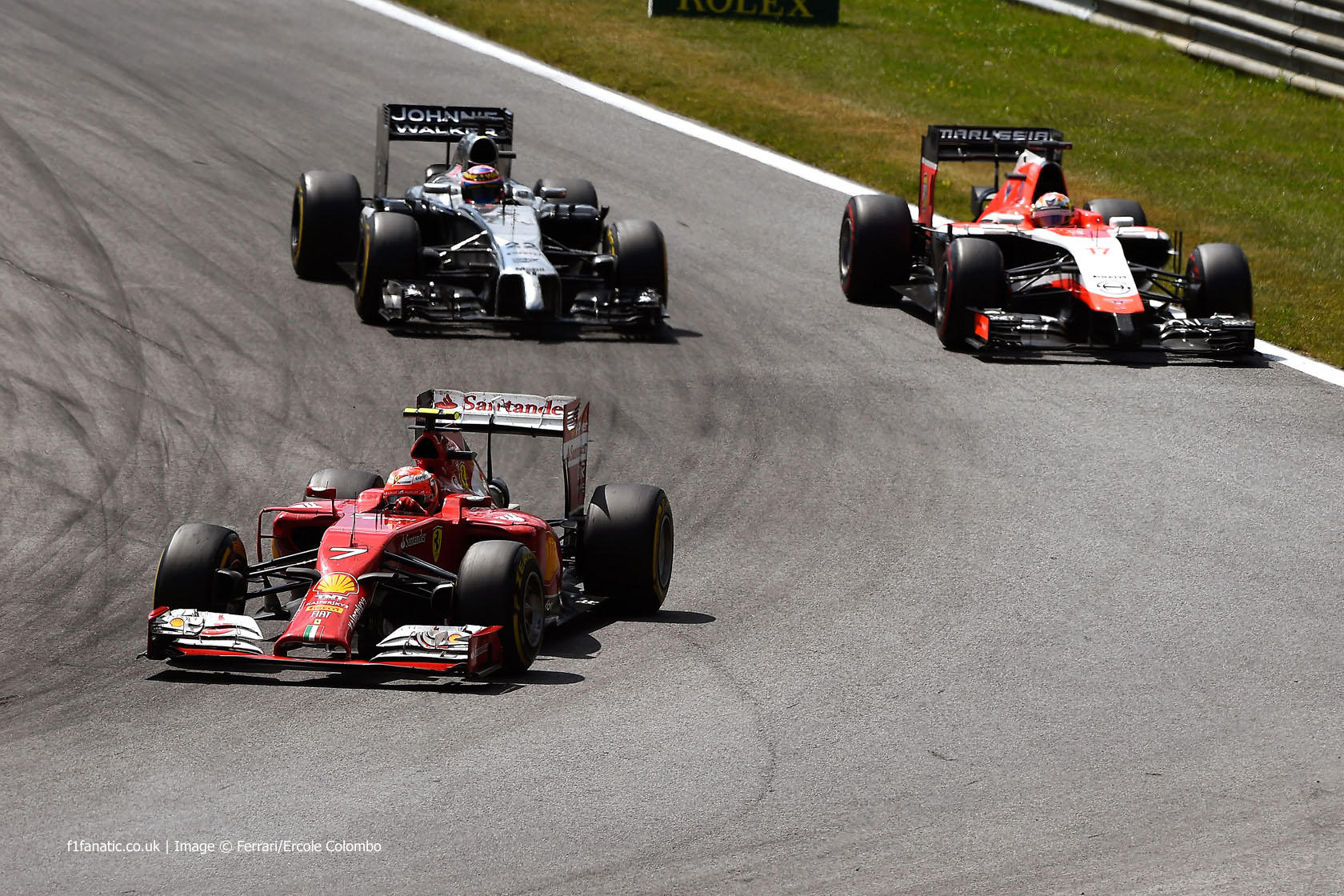 The F1 Fanatic Driver Rankings are being produced for the tenth time this year, and as usual they began with a review of how the field has fared at the mid-season point.

Here are the ten drivers in the bottom part of the list – look out for the rest in two further articles to be published later this week. Key stat: Completed the fewest racing laps of any driver so far – 466 of the 698 which have been run.

Sporting Ronnie Peterson’s helmet design in Monaco, Ericsson produced the best performance of his short F1 career to date, and gave Caterham their highest-ever finish with 11th place. Yes it was aided by retirements, but also by several of his rivals making the kind of errors he avoided, which is particularly impressive given the car he has to drive.

But that was the sole highlight of a rookie campaign which has otherwise left a lot to be desired, even when allowances are made for the serious shortcomings of his machinery. We’ve quickly grown accustomed to the sight of Ericsson climbing from the cockpit of his Caterham, for which Renault’s persistent reliability problems have only been partly to blame. Qualifying has been a particular problem – he crashed in Malaysia, Monaco (taking out Felipe Massa) and Canada – and binned it just seven laps into the last race.

Key stat: Record run of consecutive finishes for a rookie ended in Canada – when he took out his team mate on the first lap

It’s not immediately obvious whether a year’s experience has helped Chilton raise his game all that much. He continues to be a safe pair of hands for the most part – with the obvious exception of Canada – but otherwise doesn’t distinguish himself with speed in qualifying or races.

When the chequered flag falls Chilton can usually be found a considerable distance behind his team mate and not that far ahead of Ericsson. It was telling that even when Bianchi limped home with a badly damaged floor in Hungary, Chilton still couldn’t find a way past his team mate. Key stat: The only driver to be issued three penalty points for a single incident, when he flipped Gutierrez in Bahrain

The same old Maldonado mistakes persist – the careless collision which put Gutierrez on his head, the clumsy spin into the barrier during qualifying in Spain. But the greater impediment to his performance this year has been the dreadful unreliability and unsympathetic handling of his Lotus.

Because of that he has been unable to set a time during Q1 on three occasions and sidelined with technical failures during races four times. He didn’t even start the race at Monaco, which is usually one of his strongest circuits. But team mate Romain Grosjean has been similarly afflicted by Lotus’s problems, and he has had the car running and finishing in higher positions.

Key stat: Has finished ahead of Gutierrez more often than he has finished behind him, and vice-versa in qualifying

Sutil had a lot of trouble getting the Sauber beyond Q1 in the early part of the season, and the unco-operative chassis has rarely been a willing partner in the races either. Much of the first half of the season was an unrewarding grind, punctuated with notable lows in Monaco, where he crashed out, and Austria, where a communications error meant he was accidentally told to stop.

But a glimmer of hope appeared prior to the summer break. With FRIC now banned, Sauber seem a little more competitive, and Sutil came within a second of scoring their first point in Hungary.

After a year away, Kobayashi’s fan-funded comeback has produced only disappointment thanks largely to his uncompetitive car. Even in China, where he put one over Bianchi in the final laps, he had the incredible misfortune to be robbed of the result because the chequered flag was shown too soon.

In Monaco Bianchi caught him by surprise at Rascasse and pulled off a pass which eventually gave Marussia a valuable two-point lead over Caterham in the constructors’ championship. The team may rue Kobayashi not being a bit more aggressive on that occasion, but more often than not it’s been the car which has let him down. Key stat: Gained more places on lap one than any other driver: 26 (an average gain of 2.4 places)

Gutierrez has shown Sutil the way in qualifying and would probably have scored Sauber’s first points in Hungary had his energy recovery system not failed. Some poor luck also explains which his finishing record is not quite as good as his team mates – the collision with Maldonado in Bahrain, and Sauber’s pit error in Austria.

Yet it’s hard to shake the impression that, though the C33 is undoubtedly one of Sauber’s worst cars, it is capable of more than either of its drivers have extracted so far.

Key stat: Has retired on the first lap on three occasions

Massa has missed out on several points-scoring opportunities due to misfortune: he was blameless when he was hit by Ericsson during qualifying in Monaco, in his last-lap tangle with Sergio Perez at Montreal, and in the start-line crashes at Melbourne and Silverstone. But that’s not the whole explanation for why he has less than half his team mate’s points haul at mid-season.

On other occasions having started well he simply tried to make too much of the advantage, leading to tangles with Fernando Alonso in China and, most dramatically, with Kevin Magnussen in Germany. But most worrying for Massa are the increasingly common days when Valtteri Bottas has been just plain quicker than him.

Key stat: Toro Rosso is the only team where each driver has finished in front of the other the same number of times

There’s very little to choose between the Toro Rosso pair, and that reflects very well on the latest product of Red Bull’s junior driver programme. Despite a disrupted testing programme, including one day at Jerez when he didn’t get on the circuit at all, Kvyat scored in three of the first four races on unfamiliar tracks. He then used recent circuit experience to good effect at the Red Bull Ring, lining up seventh on the grid, only to be sidelined by one of Toro Rosso’s many car problems.

It hasn’t been all smooth sailing – he ruined his race in Germany with a rash move on Perez, and the Hungarian weekend was a complete write-off. But he has more than justified Red Bull’s surprise decision to promote him. Key stat: Sixth in Hungary was his best finish so far – Alonso has only finished lower than that once

Niggling problems during practice have been a feature of Raikkonen’s season so far, and that can’t have helped his qualifying and race day performances. But even making allowances for that, and the inevitable adjustment period involved when a driver switches teams, Raikkonen’s return to Ferrari has evoked more memories of his poor 2009 campaign than his 2007 championship victory.

At times it’s seemed as if his F14 T had been fitted with a Magnussen magnet, but while the McLaren driver bore responsibility for their tangles in Malaysia and Bahrain, the Monaco collision was down to Raikkonen. This began a poor run of races which included tenth places at Montreal (where he spun) and the Red Bull Ring, his nasty (and self-inflicted) smash at Silverstone, and a bruising encounter with several rivals at the Hockenheimring.

However he was happier with his car’s handling in Germany and that served as a springboard for his best performance of the season so far in Hungary, where he finished sixth despite being eliminated in Q1 due to an error by his team. Better days seem to lie ahead.

Key stat: Has the most retirements due to car failure of any driver: five

It’s a case of deja vu for Jean-Eric Vergne – at the mid-point of the season he’s had more mechanical failures than any other driver, which also happened last year. This has plainly affected his ability to score points, such as in Malaysia where he reached Q3 but had a power unit problem at the start of the race.

Car failures aren’t the only way he’s been let down by his team. In Spain a wheel came off his car during practice, leading to a grid penalty, and in Monaco having qualified seventh a pit release error led to a penalty. Wet weather conditions seem to bring out the best in him, as in Hungary where he got ahead of Nico Rosberg at the restart. Kvyat is certainly keeping him honest but Vergne narrowly has the upper hand at the moment despite his many misfortunes.

The next part of the rankings will be published tomorrow.

How do you think these ten drivers have performed so far in 2014?