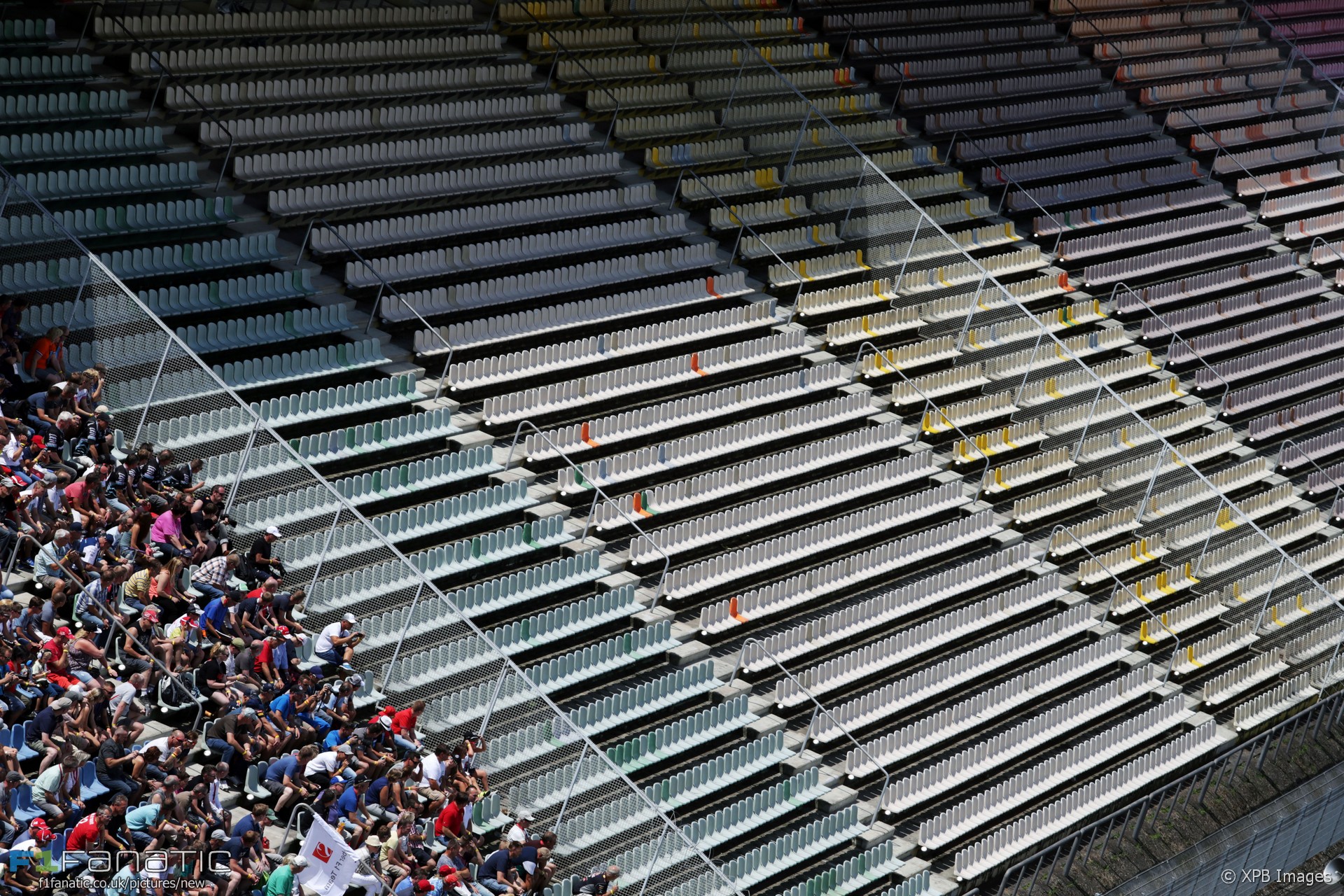 In the round-up: The managing director of the Hockenheimring urges fans to support its race after a small turn-out on the first day of practice for the German Grand Prix.

"'Of course we want to keep F1 for the image of the circuit,' says Georg Seiler, the managing director of the Hockenheimring. 'But it must be at a level that works economically. We need to rely on the fans.'"

Ocon in line for Manor drive after break (Autosport)

"There is now a possibility Ocon could be promoted into a full-time race seat with Manor for the final nine grands prix of the season."

"Rio’s performance so far is still below par, but (we hope) Manor could give him the chance to race until end of year."

"Yesterday we discussed that we will try to have a 'wild' weekend because this track has adequate run off areas."

"It’s my understanding that Lewis (Hamilton) did go and see Charlie (Whiting) but it wasn’t in any way to seek a review of Nico (Rosberg’s) lap – it was for his own understanding of what should be done in the future, how that should work for him in the future. I think that was regrettable. Personally, he should have kept to advice from the team and we can obtain that from Charlie as necessary."

Drivers are not being listened to - Sainz (F1i)

"For sure we all want it to be put on the car as soon as possible. I am disappointed and we'll look into that."

"The big issue for next year is that many teams – not ourselves but many of the smaller teams – have to freeze their chassis designs at the end of this month. We’re already late for them with a big regulation change."

Carlos Sainz Jnr: "All the drivers agreed that moving under braking is probably the most dangerous thing you can do and now the FIA should take it a bit more seriously."

Verstappen ‘didn’t do anything wrong’ (Crash)

"I don't need to defend myself because I am confident and I think that I didn't do anything wrong."

"Unfortunately, F1 is mirroring what’s happening in the real world where more and more rules and laws are added but none are ever cancelled it seems."

"Officers have information indicating that the architect of recent kidnappings which targeted high-worth individuals was led by a criminal from Europe."

"'I’m happy with the team, we get along really well, we have a good relationship, and I think they like me as well,' (Pascal Wehrlein) said, turning to the team’s press attaché and inquiring if that was the case. She responded that it was."

"Mick Schumacher, the son of Michael, was present at the German Grand Prix for Friday practice and was a guest of the Mercedes team as he watched their driver Nico Rosberg go quickest in the morning and afternoon at Hockenheim."

"Using sport for political gain is neither new nor a uniquely Russian notion, but Putin’s Russia is one of the world’s most striking exemplars. Over $50 billion was spent on the Sochi winter games, the 2018 World Cup is estimated to cost $20 billion, while Russia is rumoured to be paying $50 million a year just for the privilege of hosting the Russian Grand Prix. These events are not intended to boost tourism, but rather to boost Russia’s international standing."

Session nearly over so I'm off to talk to the crowd and ask him if he enjoyed his day.

Problem with Hockenheim is not just a lack of fans, but the huge stadium section accentuates the lack of fans…

Want to hear something funny? Yesteday i was "caught" with track limits but instead of deleting 1/2laps, they deleted 32min of my session 😂

Sad to hear of the recent passing of Ake Strandberg, a brilliant mechanic for Ronnie Peterson and an integral part of Sweden's #F1 heritage

Trend this year has been to nominate a slightly softer range compared to previous races. In #Hockenheim we've actually gone a step harder.

F1 is looking to reduce the use of Safety Car starts in wet conditions but it may not always be possible:

I know that many fans are likely going to be happy about the standing starts after running the Safety Car for a few laps in the rain but I don’t think they should have that as the blanket rule because it needs to be remembered why they started looking at Safety Car starts to begin with: that being visibility.

Having a standing start where well over half the grid are completely blind in the spray is unnecessarily dangerous not just in terms of cars stalling but also if somebody spins towards the front like Coulthard back in Spa 1998 when you had a situation where cars behind can’t see and just pile into them.

Yes in some cases a standing start will be perfectly fine, But in other instances it simply won’t be the safe thing to do so there should be something that lets them run a Safety Car start if they absolutely need to.
@GT-Racer