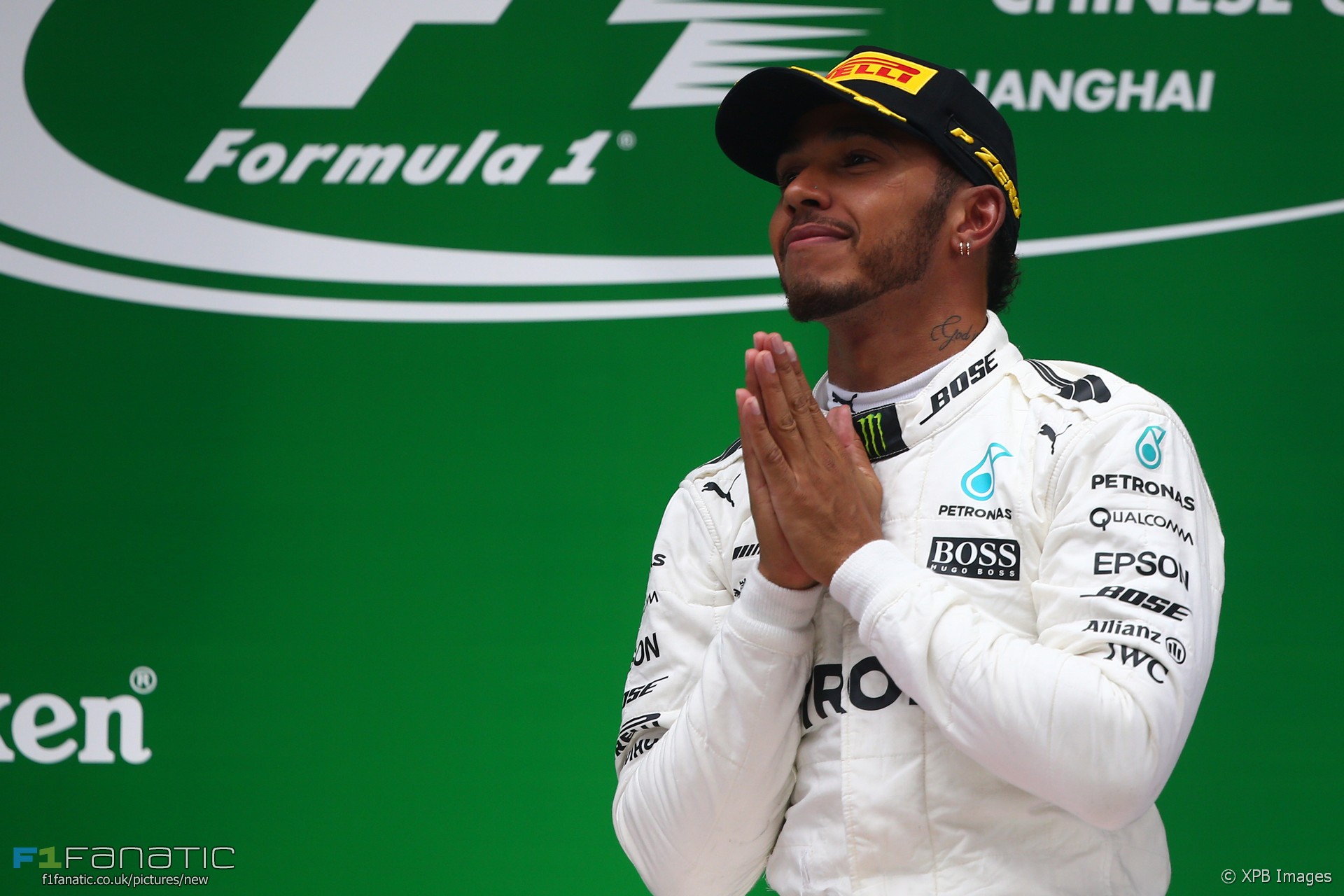 Only seven drivers in Formula One history have achieved this feat more than three times. One of them is the man who increasingly looks like being Hamilton’s main title rival this year, Sebastian Vettel.

His victory laps means he has extended his run of winning streak of taking at least one victory in each of the 11 season he has raced in.

Hamilton bagged his 63rd pole position on Saturday which leaves him three behind Ayrton Senna’s former record of 65. Though, as Hamilton acknowledged after qualifying, “he had a lot of pole positions with less races”. Hamilton is six behind all-time pole position king Michael Schumacher. This was Hamilton’s sixth pole position in a row, leaving him one shy of his personal best and two away from the record, which is held by Senna.

Hamilton was already the most successful driver in China and has added to his tallies, reaching six pole positions and five wins at the Shanghai track. But it’s probably still not enough to make up for that mistake in his first race here which arguably cost him the 2007 championship.

He reached the podium for the 106th time on Sunday, equalling Alain Prost’s tally. He’s got a long way to go to equal Schumacher’s record of 155, however.

By leading Vettel home in China, Hamilton drew level with his rival in the points standings. The last time we had a tie at the top of the championship was after the 2012 Spanish Grand Prix when Vettel and Fernando Alonso were on 61. Vettel went on to win that year’s championship.

What happens if they end the year still tied on points? The sporting regulations set out the procedure which will be followed:

Based on their current results there’s no way to separate them, but it’s very unlikely they’ll end the season with perfectly identical results. Not only has clause ‘d’ never been invoked before, we’ve never had a tie on points between two drivers at the top of the championship before at the end of an F1 season.

Mercedes marked their 150th race start with their 75th pole position – a strike rate of exactly 50% – and 65th race win. They prevented Ferrari from scoring their first back-to-back wins since 2010.

For the second race running cars from five different teams were eliminated in Q1. This time one of those drivers – Max Verstappen – went on to finish on the podium. This has only happened once before in Shanghai and it was also a Red Bull driver – Mark Webber six years ago.

Nico Hulkenberg took Renault into Q3 for the first time since the new owners took over the Lotus team at the end of 2015. The top four in Q3 lined up in the same order they did in Australia.

However a couple of mistakes during the race saw Hulkenberg pick up four penalty points. He and team mate Jolyon Palmer will have to tread carefully over the following rounds as both have at least half the penalty points needed to receive a one-race ban. Daniil Kvyat and Sebastian Vettel are in the same position:

Sergio Perez will have also need to take care over the rest of the season as he’s already picked up one reprimand in each of the first two races. One more will earn him a ten-place grid penalty.

Along with Ricciardo, Perez earned his reprimand yesterday for failing to show up at the national anthem ceremony. The stewards noted this was “not imposed for a driving infringement” but this can still count towards a grid penalty as only two of the three penalties must be for driving infringements.

If Perez does collect a third reprimand later in the year, his ten-place grid penalty will be due partly to his national anthem infraction.

Finally, Fernando Alonso’s run of Chinese Grand Prix finishes came to an end when he was forced to retire on Sunday. Prior to that he’d been classified in every race at Shanghai since 2004, and had only been lapped once.