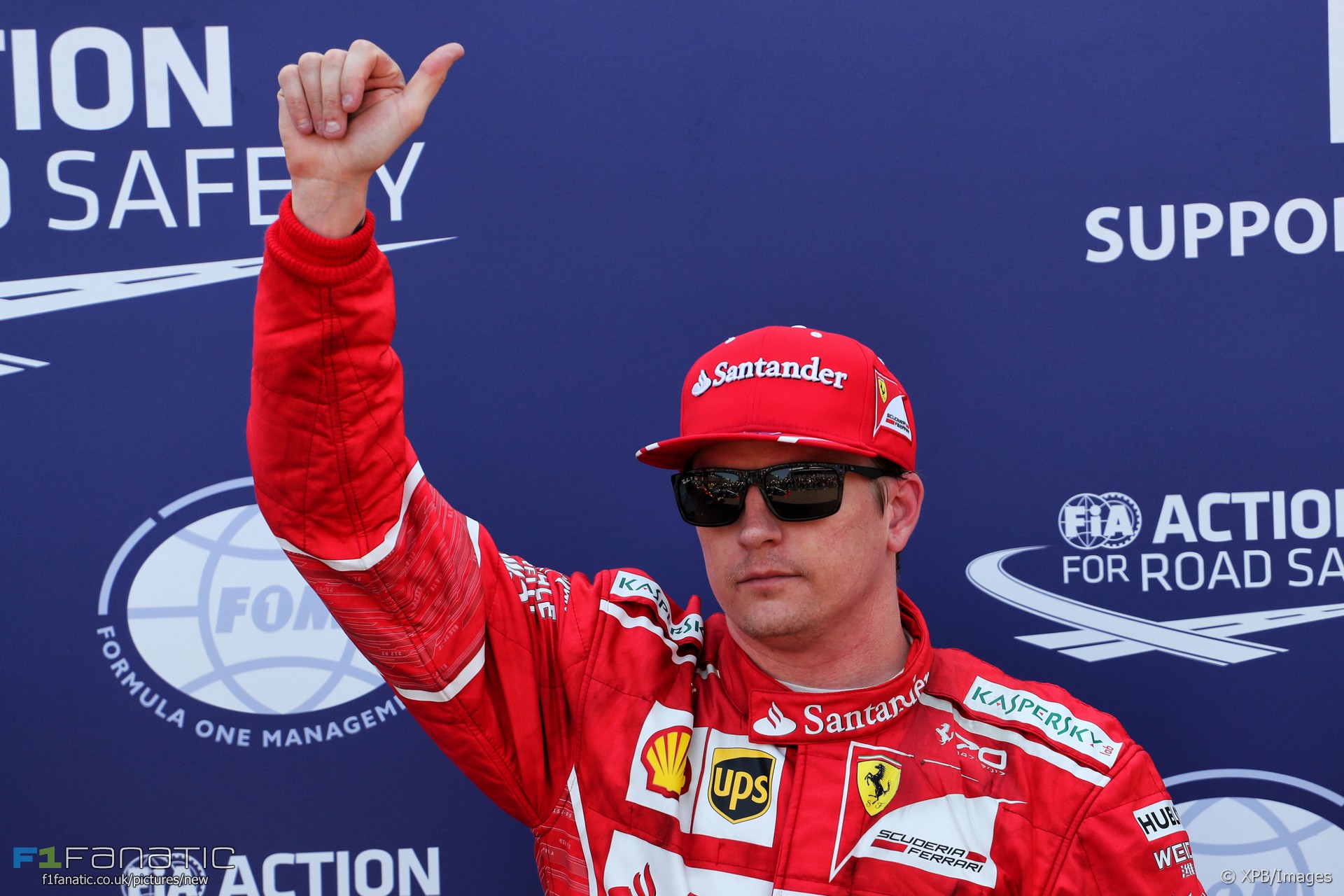 Kimi Raikkonen stormed to his first pole position since 2008 by beating Sebastian Vettel and Valtteri Bottas by less than half a tenth after Lewis Hamilton was eliminated in Q2.

A thrilling and competitive qualifying session saw Ferrari lock out the front row for the second race weekend in three races. Valtteri Bottas only just missed out on second by two-thousandths of a second, with Max Verstappen and Daniel Ricciardo starting fourth and fifth respectively.

Lewis Hamilton was caught out by a late yellow flag in Q2 after struggle to find grip in his Mercedes, he will start 13th on the grid for the Monaco Grand Prix.

Track temperatures topped 50 degrees as qualifying began in Monaco. There was a rush of cars who took to the circuit, with the Ferraris, Red Bulls and Mercedes all out straight away on ultra soft tyres.

As in final practice, it was the second timed lap that was proving the quickest. Ferrari set the early pace with Vettel posting a 1’13.289, with Mercedes only managing high 1’13s, until Daniel Ricciardo and Max Verstappen lowered the quickest times in the Red Bulls.

After crashing in final practice, Esteban Ocon took to the circuit with ten minutes in the session after Force India successfully repaired the Frenchman’s car.

Romain Grosjean spun his Haas at Mirabeau, leaving him vulnerable in the drop zone. As time expired, there was a straight fight between the two Frenchmen of Ocon and Grosjean to make it through into Q2, with Grosjean able to improve enough on his last lap to eliminate the Force India driver.

Jolyon Palmer was also eliminated in P17, almost a second off Nico Hulkenberg’s pace, with Lance Stroll failing to make it through the first session after a suspected hydraulic leak on his Williams.

The two Saubers of Pascal Wehrlein and Marcus Ericsson were the slowest in the session, with Ericsson clipping the inside barrier at the chicane forcing him out with a broken left-rear wheel.

The second session began in similiar fashion to the first. This time, Kimi Raikkonen set the early benchmark, with Verstappen, Vettel and Bottas remarkably close behind.

Lewis Hamilton’s first run almost ended in disaster when the Mercedes driver lost grip heading into Casino Square, but was able to catch a major slide and somehow avoid the outside banner. Hamilton was later heard complaining of a lack of grip.

Grosjean produced a good lap to go provisionally sixth fastest, but tapped the barrier at St Devote with his left front at the start of his next lap.

With time ticking down, Hamilton was still in the drop zone and needed to improve, but with visible oversteer and traffic, it was a nervous time for Mercedes.

Then, with only seconds remaining, Stoffel Vandoorne crashed his McLaren at the Swimming Pool in a virtually identical manner to Esteban Ocon in final practice. Hamilton was the next car on the scene and was forced to abandon his flying lap due to the double-waved yellow flags. With no time left to improve, Hamilton was doomed to start at least 12th.

Despite strong practice pace, Daniil Kvyat was eliminated in 11th, with Hulkenberg, Kevin Magnussen and Felipe Massa’s Williams the other cars failing to make it through into Q3.

Jenson Button made it into Q3 on his one-off return for McLaren, but Stoffel Vandoorne’s crash meant that despite the rookie making it into the final session on pace, he would not have the opportunity to take any further advantage from it.

With Hamilton not progressing through into the crucial final qualifying session, the door now seemed wide open for Ferrari to secure a second consecutive front row lockout.

Kimi Raikkonen once again set the early benchmark with a 1’12.296, with Ricciardo and Vettel both seven tenths off from the Finn.

With Raikkonen improving his time to a 1’12.178 with the chequered flag looming, it appeared that the Ferrari driver could take his first pole since the French Grand Prix of 2008. Sebastian Vettel went purple in the first two sectors, but lost time in sector three and missed out on pole by less than half a tenth.

It came down to Valtteri Bottas to snatch pole for Mercedes, but he was unable to best the Ferraris and finished third, 0.002s behind Vettel.

Red Bull were only three tenths from pole with Max Verstappen, with Ricciardo lining up fifth. Carlos Sainz will start sixth in the Toro Rosso, followed by Sergio Perez and Romain Grosjean.

Jenson Button took ninth for McLaren, but will start from the back of the grid after a 15-place grid penalty. Stoffel Vandoorne will start 13th after his penalty from Spain.