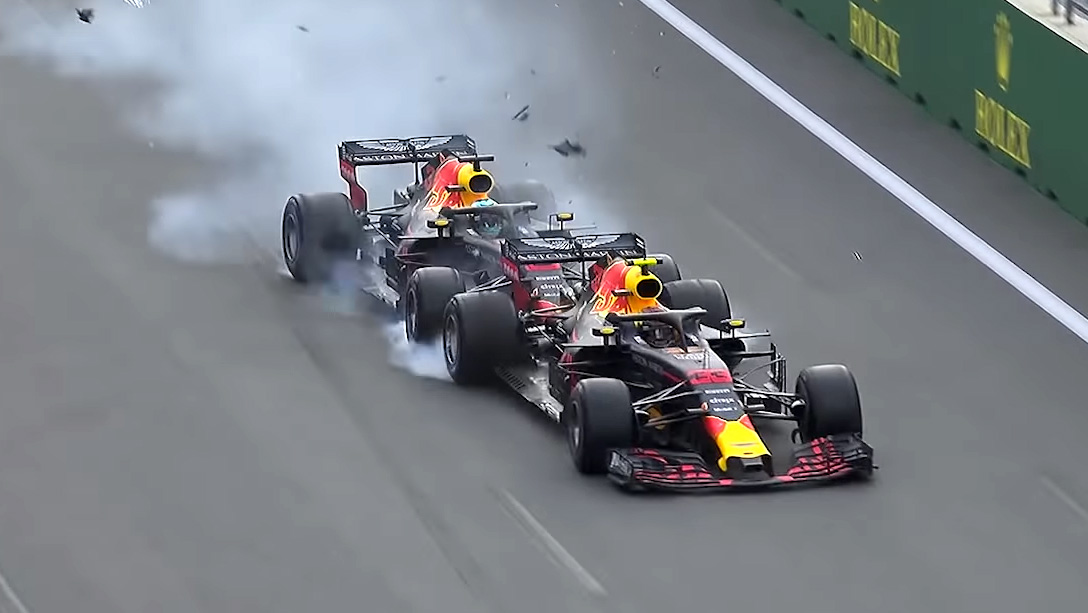 Daniel Ricciardo says it was impossible to avoid crashing into Max Verstappen after his team mate changed lines when they collided in the Azerbaijan Grand Prix.

“I definitely committed early enough and, at the time, with a clear inside,” said Ricciardo. “I’m then on the brakes and when you get the air taken away, you could see I tried to pull out of it but there was no real escape route after that.

“You lose all downforce and everything. Even the brakes, they lock a lot easier when you don’t have the downforce on. That was like the end result but it was due to that inside closing up.”

Red Bull conducted a detailed post-mortem into the crash which put both its cars out of the race, said Ricciardo.

“Obviously we are the drivers, we created, in the end, the incident. But it was an accumulation of events and it was important to address all areas. I don’t think it was just us in that moment, there was a build-up and maybe a way we could’ve responded better, whether it was releasing a car or something, a lot of things were talked about.”

He believes the team will be more likely to tell its drivers to swap positions in a similar scenario in future.

“I think if it got to that point again where there’s banging wheels and stuff then [they would]. Especially if the car [behind] is faster then you’d probably expect at some point they’ll [say] swap cars and release one of them. There’s no guarantee but that was one thing they certainly talked about.”

Ricciardo indicated he will be more insistent in calling for a change of positions if he feels Verstappen is holding him up in future.

“Maybe that’s my problem: I’m saying I can go faster but I’m not shouting, sounding like a… little girl. But maybe I should.”

Verstappen already has a Red Bull deal for the 2019 F1 season but Ricciardo is considering his options for next year. He wouldn’t be drawn on whether the collision will influence his thinking. “I won’t comment,” he said. “Can we move on from Baku? You can ask me about Baku last year if you want!”

91 comments on “Ricciardo: No way to avoid Verstappen crash after he changed lines”