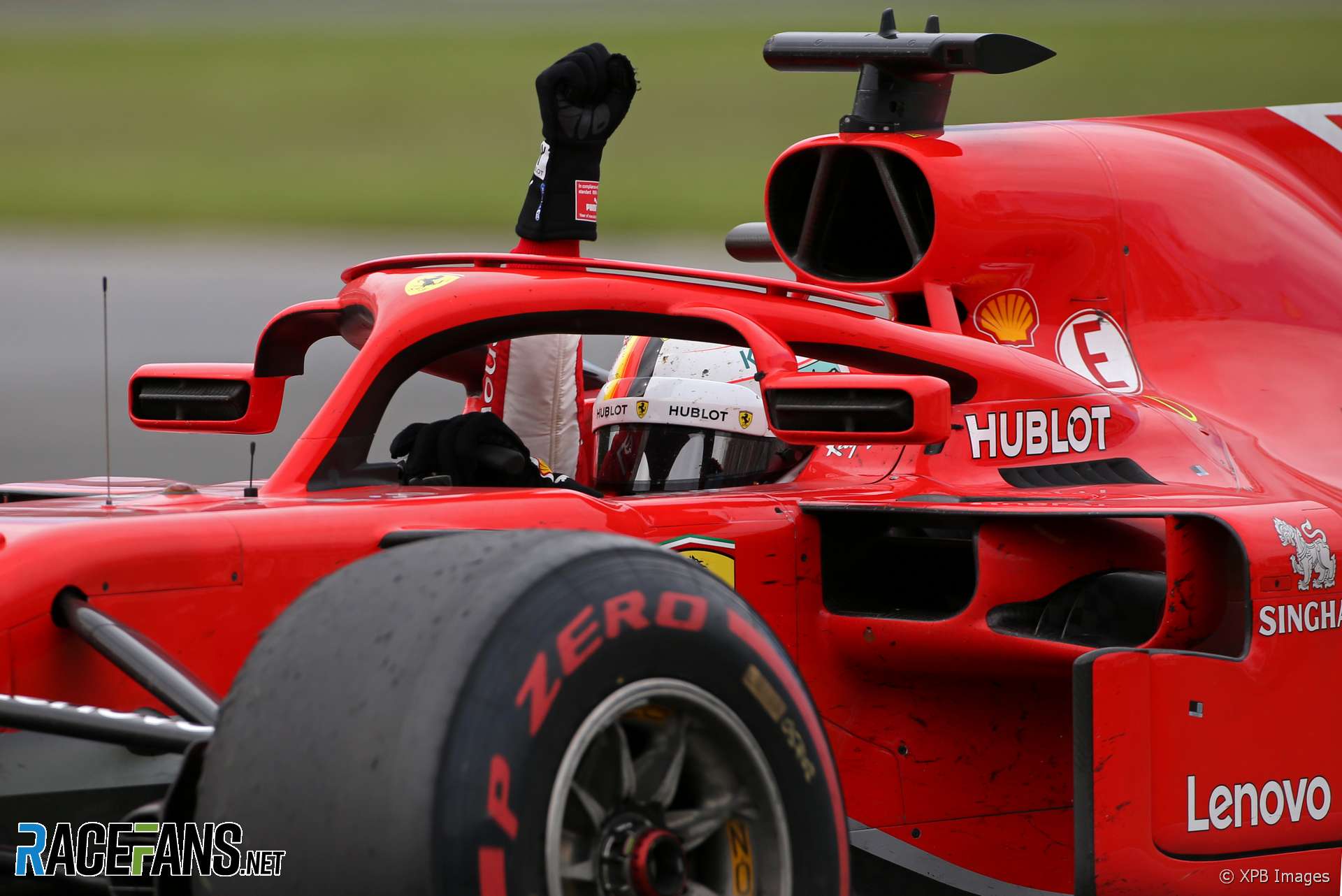 The championship contest Formula 1 is serving up in 2018 is often more exciting on paper than it is on the track.

In Canada three different cars occupied the top positions on the grid, separated by less than two-tenths of a second. When the chequered flag fell (prematurely) the race winner edged into a one-point championship lead.

Yet these fine margins are too seldom bring translating into on-track action. In Monaco this resulted in knee-jerk claims for the classic venue to be torn up in the name of creating more passing.

But at the Circuit Gilles Villeneuve, a venue which has reliably produced excellent races in the past and leads the current venues in the race ratings produced by RaceFans readers, the lack of action seemed more mystifying.

With overtaking almost impossible, as long as nothing happened to disrupt the running order, Sebastian Vettel’s 0.09-second margin over Valtteri Bottas in qualifying proved decisive.

Strategic stalemate at the front

Ferrari had the quicker car on the long straights of Baku, yet somehow contrived to throw victory away. They made amends at the Circuit Gilles Villeneuve, another circuit where top speed really counts.

In that respect Canada reaffirmed what we saw in Baku: the Mercedes is no longer the quickest car on power tracks. Expect a full house at Monza, though we wait to see what Mercedes’ delayed power unit upgrade will bring.

Vettel was never likely to be beaten on the short, 362-metre run to turn one. Sure enough, he kept up the 100% record of pole sitters retaining their lead at the start of races this year. Valtteri Bottas took up the chase followed by Max Verstappen.

The latter looked like he was back to his 2017 best as he turned in his most convincing performance of the year so far. Verstappen headed all three practice sessions, came close to sticking his car on the front row in qualifying, and hounded Bottas around the opening turns.

Starting on the hyper-soft tyres, Verstappen needed to at least split the front-runners to be in with a shot of winning. It didn’t happen, and around nine laps in he began dropping back from Bottas at a rapid rate. That forced him into the pits as early as lap 15, which meant he had to take the hardest available tyres to get to the end of the race without pitting again. Once back on the track these proved slower than the front-runners’ worn ultra-soft tyres, and he slipped further out of contention.

This highlighted F1’s present dilemma. Why didn’t Red Bull stick Verstappen on a set of ultra-soft tyres so he could lap more quickly, then make a second stop for fresh hyper-softs to continue the attack later? Because in order to make that strategy work he’d have to overtake, and the performance advantage needed to make a pass work is too great to justify such a strategy.

The only way to make up places in a ‘conventional’ race is through strategy. Fortunately for Red Bull, they were able to do that with Verstappen’s team mate.

Lewis Hamilton was in trouble from lap one. “The whole power unit was not working properly,” he explained afterwards. “Gear shifts, everything at the back of me, basically.”

The problem was diagnosed as overheating. Afterwards, team executive director Toto Wolff was emphatic that the team hadn’t made a mistake with setting its cooling levels, as had happened in Australia, but that something wasn’t working as intended.

The team chose to bring Hamilton in as early as possible in order to address the problem by opening up parts of the bodywork around his cockpit to aid cooling. This was done without significantly slowing his pit stop (he had the fourth-fastest complete stop of the race). This only alleviated Hamilton’s problem, however. He had to cope with occasion power dips until the end of the race.

That made life more difficult for Hamilton who now had to overtake Daniel Ricciardo, who jumped ahead by pitting one lap later than him and setting a rapid in-lap. Over the closing stages of the race Hamilton got close but just as he was poised to strike he locked up and ran wide at turn 10, where he’d also struggled in qualifying.

“I was pushing so hard,” said Hamilton. “If you could see the things I was saying to Daniel – not derogatory or anything like that – just ‘I’m chasing you’, those kind of things. Real aggression talk.

“Every now and then there was little bit of a chance, then a backmarker gets in the way, you get close, the car slides off the damn road…”

Despite still suffering problems from an engine which was on its seventh and final race, Hamilton pressed on until the end, never dropping out of Ricciardo’s DRS range. But there was to be no last-lap heroics from the Mercedes drivers. As it turned out that was probably for the best.

If the Canadian Grand Prix was memorable for no other reason, it will be for model Winnie Harlow accidentally ending the race too soon by waving the chequered flag on the penultimate lap. Afterwards the FIA stated the error hadn’t been on her part – she had waved the flag when she was told to.

Nonetheless it meant proceedings officially came to an end on the 68th tour, though the leading drivers did complete the full 70. Bottas cut his fuel so fine he had to lift as he approached the finishing line, which allowed Verstappen to finish a tenth of a second behind him. Of course, had Verstappen slipped by, the flag error would have given Bottas his second place back.

Kimi Raikkonen was the last of the front-runner to pit and initially looked like he might use Ferrari’s power to give Hamilton a hard time. But then he slipped back out of range. He had a massive gap back to Nico Hulkenberg, yet Ferrari evidently decided it wasn’t worth pitting him for a fresh set of tyres and a late charge.

Hulkenberg arrived in seventh, ahead of his team mate, the two Renaults easily jumping Esteban Ocon when the Force India driver had a slow pit stop. Sergio Perez in the other Force India clipped Carlos Sainz Jnr while trying to pass, skidded off, and fell out of points contention.

Fernando Alonso took advantage of the delay Perez caused rejoining the track by passing the Force India and Kevin Magnussen. That put him on course for the points until a broken charger air cooler pipe caused a loss of boost pressure, putting him out. The final point therefore went to the increasingly impressive Charles Leclerc, who revelled in the Sauber’s straight-line speed which other drivers commented on enviously.

Lance Stroll has grown used to disappointment this year, but his home race was especially galling. Having qualified 16th, he had made up three places when his car snapped sideways in turn five, putting Brendon Hartley hard into the wall. The two cars came to a rest at turn six. Stroll hadn’t even made it as car as his fans in the ‘Lance Stroll grandstand’ at turn 10.

The home crowd at least got to enjoy a pre-race reminder of past glories. Jacques Villeneuve drove the Ferrari his father Gilles won the first edition of this race in 40 years ago.

It left an obvious impression on the race winner, who scored Ferrari’s first triumph at this track for 14 years. Afterwards Vettel spoke at length about Villeneuve’s legacy in Canada, and said his points gain in the championship was an incidental benefit alongside winning this race.

That was a sentiment that Villeneuve, who drove every one of his 67 races as if it was a title-decider, would surely have shared. Though he probably wouldn’t have thought much of what passed for a race at the circuit which now bears his name.

Hopefully at F1’s next race, the series’ return to France, the action on track lives up to the standard set by the utterly riveting championship fight.