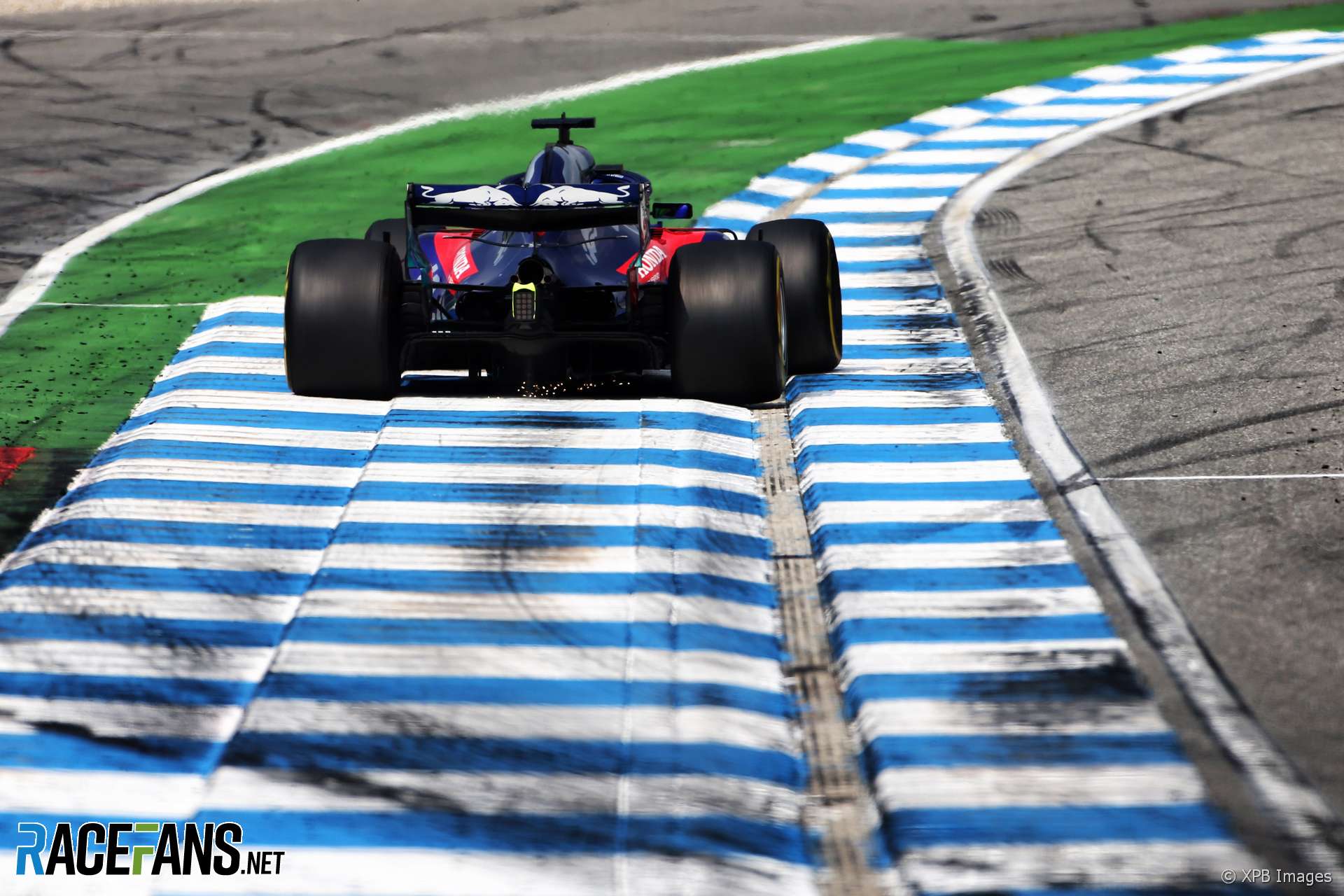 In the round-up: Brendon Hartley says Formula 1 sets a bad example by allowing drivers to run with all four wheels off the track.

I saw many photos of myself and the rest of the field with four wheels over the white line [in Hockenheim] which was a very common racing line for us. I think it probably doesn’t set a good picture for the rest of the motorsport world.

Obviously in this case I think it was accepted they were the track limit, from that kerb, which was a hard limit. But by the letter of the law I think we were all four wheels over the white line so part of me would say I would prefer that we couldn’t do that.

In Austria there’s another argument that the cars were being pretty damaged [by the kerbs]. I think Astroturf also works very well because you lose a lot of grip but you don’t damage the car. I’m actually quite a fan of the Astroturf.

P2 yesterday to finish off what was a great weekend on home soil at @brandshatchofficial Not easy as this circuit is a massive challenge but we leave with a bigger lead in the championship than we arrived. Job done ✅

No words for this weekend. Felt strong from the start but bad luck seems to keep on chasing me. After a decent qualy with P6 I came in an unfortunate touch with @luggiauer the smallest touch caused him to spin in front of me. Both of our race gone. Finished P12. Going home with 0 points is pretty painful.. time to reset! #audisport #done #brandshatch

Chip Ganassi Racing announced today that Verizon IndyCar Series championship leader Scott Dixon has signed a multiyear deal to remain with the team’s he’s driven for since 2002, where he has won all four of his series titles and all but one of the 44 race wins in his legendary career.

Brawn: People in MotoGP are more accessible than in F1 (MotoGP)

Brawn also offered his thoughts on the differences between the MotoGP paddock and Formula One: 'There's one thing I like very much about the MotoGP, the fact that the personalities here are more accessible. It's not the same in F1 and we have to improve.'

The social backlash of an electric F1 (FormulaSpy)

This is why the argument of ‘We already have Formula E, why does F1 need to be electric too?’ simply doesn’t work. The most likely scenario is that F1 embraces the technology Formula E has already started developing, as indeed is its purpose. By then power and durability will have increased drastically to a level suitable for the pinnacle of motorsport.

Who has more power in their team, MotoGP riders or F1 drivers? (James Allen on F1)

'Now you not only hire a rider, you hire a multinational company. In the past, riders started to work in a factory and had to adapt themselves to the work system of the brand. That is the only thing you cannot buy; the rest of the things such as trucks and material is a matter of money. However, now, a rider has a lot of power. Sometimes, it’s the team who has to adapt itself to the rider,' Forcada told motorsport.com some months ago, as if anticipating what was going to happen.

The hottest debate in our driver ratings is teammate comparisons – and one red-uniformed one in particular. Just not quite the one you might expect in 2018; we’re talking Schumacher:

“You speak of the literal number of times teammates have moved over for MS, but you ignore the fact that before each season began MS’s teammates had already ‘moved over’ for him by contract. If it is only 3 times that his teammates literally moved over for him then that tells me how badly they were held back and were almost always, by design, behind him. After all, they were driving a car meant for MS but without the latest upgrades. And then there’s the contract thing.

You want to compare to LH? Well at least LH, especially with Nico in the other seat, had psychological grief to deal with race after race. Whereas MS had no need to concern himself, even if the odd time his teammate outqualified him, he still could rest easy on Saturday night that there would be no competition from said teammate on Sundays. You can’t say the same of LH/NR.

Him moving over for Irvine has nothing to do with anything really. That was just the circumstances of them having to appear to back Irvine, but ultimately there was no way they were ever going to let him take the glory of ending the Ferrari WDC drought after spending all that money for MS to do it.”
Robbie