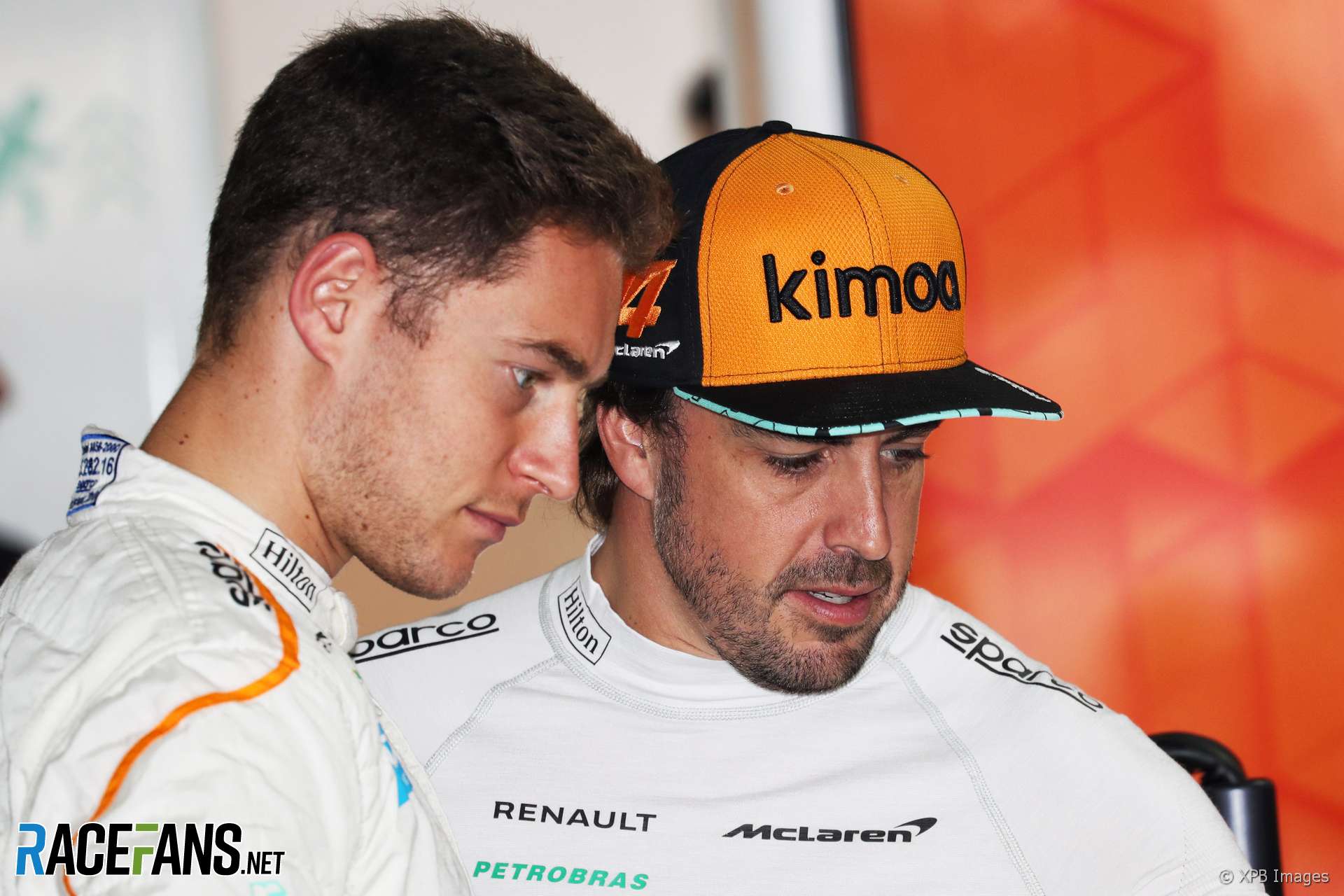 In the round-up: Fernando Alonso says his team mate Stoffel Vandoorne is one of Formula 1’s best talents.

Speaking before Vandoorne’s move to Formula E was confirmed, Alonso was asked about his team mate losing his seat at McLaren:

Well obviously it’s a shame in a way because I think Stoffel is one of the best talents.

There are only two drivers who dominated Formula Two: (Charles) Leclerc and Stoffel. Both of them they have all the records: pole positions, victories etc… One will be fighting for the world championship next year and one is probably not in F1 next year.

It has been probably always like that, Formula 1. Maybe not as extreme as [for] Stoffel because he’s one of the two best talents in the paddock but it’s difficult to change the situation.

Nicholas, who has already been in the car for three FP1 sessions, will reprise his testing roles at the USA, Mexican and Brazilian events. He will be standing in for Esteban Ocon in Austin and Mexico City, while deputising for Sergio Perez in Interlagos. pic.twitter.com/ENukaMOOxG

From 2019 the @RenaultSpSeries Eurocup will use the same Tatuus F3 T-318 chassis as @WSeriesRacing. Both will have 1.8-litre engines, but Eurocup's will have "up to 300bhp" compared to W Series' 270bhp.https://t.co/foK8fxR8o2

This time next week…..I will be trackside at @COTA. Please help me reach my goal to finalize the remaining amount of my race weekend budget. Get an autographed hero card or your name in my car. Details here -> https://t.co/1FwhQWx8eK pic.twitter.com/TH9vd8lR91

"Do you maybe think we should put a car on there somewhere too?"
"I suppose so…"#F1 #USGP pic.twitter.com/LlNZtwUrC1

We will be as diligent as ever - Toto (Mercedes)

"While we didn't have the fastest car in the summer, we've seen the performance swing in our favour recently; however, it is closer than it looked in recent races."

Renault: F1 could lose a manufacturer over costs (Autosport)

"I think F1 cannot afford to lose one of them. And I don't see enough decision/action being taken to alleviate that necessity to spend in a way that might be untenable in the medium to long term."

Meet the F1 racer who streams PUBG, and the esports racer who's now part of an F1 team (Eurogamer)

"Something like iRacing, you play it at home and it's fun - this is work. It's a job. That's the big difference."

Has Formula E hit a sweet spot with its technical regulations?

It’s a shame that many people can’t see past the Mario Kart gimmicks to this achievement. Next season will be the acid test.
Alex Brown (@splittimes)

45 comments on “Alonso: Vandoorne is ‘one of F1’s best talents’”