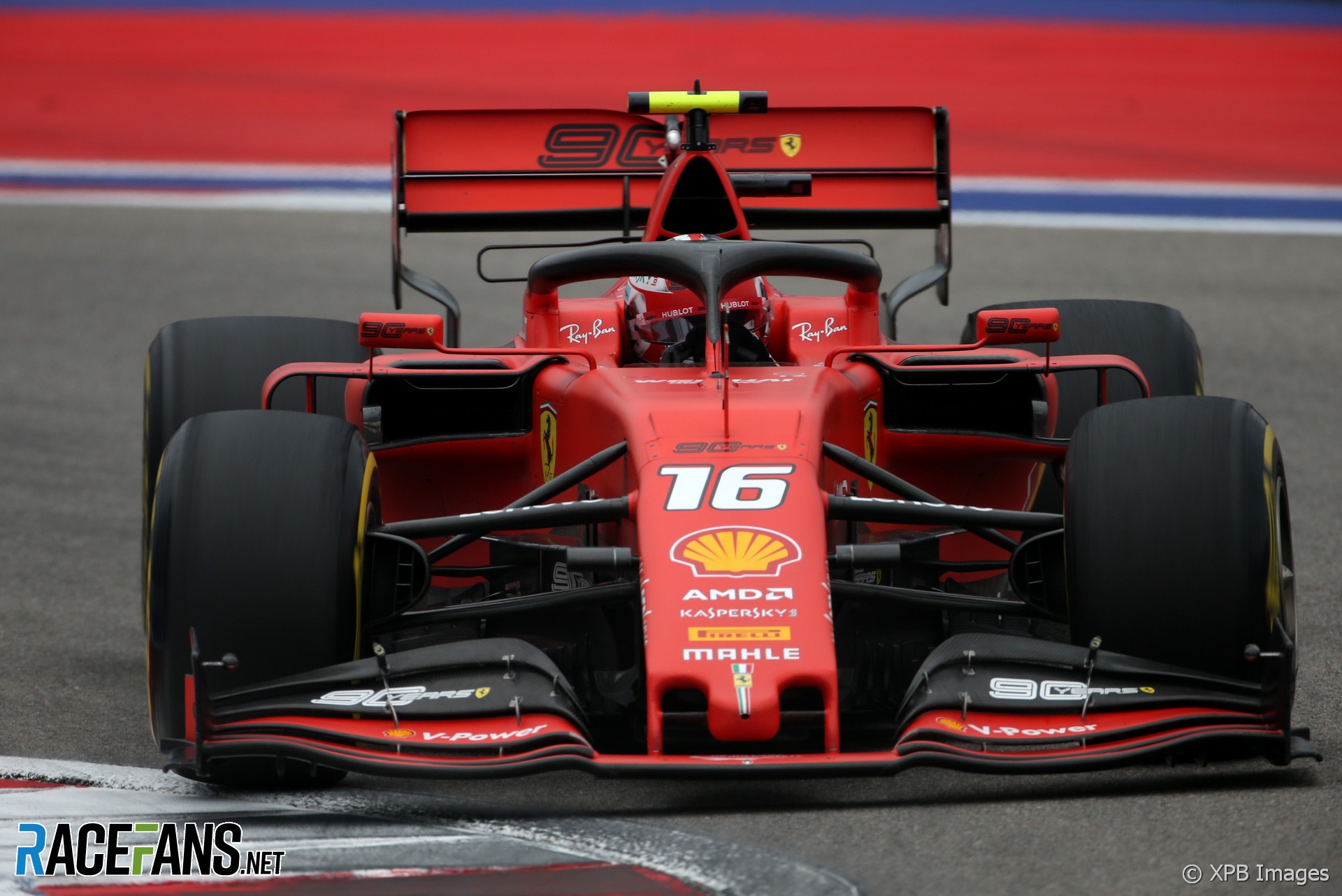 Charles Leclerc held sway throughout qualifying for the Russian Grand Prix and claimed his fourth consecutive pole position by four tenths of a second.

Lewis Hamilton denied Ferrari a one-two in Sochi, pushing Sebastian Vettel back to the second row of the grid with his final lap.

Daniil Kvyat’s latest engine failure in final practice spelled the end for his qualifying hopes. The Toro Rosso driver wasn’t able to take part in qualifying, and was doomed to start last anyway because of his grid penalty.

He will be joined at the back of the grid by Alexander Albon after the Red Bull driver’s difficult weekend continued. He spun backwards into a barrier at turn 13, damaging the rear of his RB15, and bringing out the red flags.

When the session resumed Sebastian Vettel, who hadn’t set a representative time up to that point, quickly went out and bagged his place in Q2 with a lap quick enough to lead the times.

That put Pierre Gasly into the drop zone. However Toro Rosso’s fears both drivers would go out in the first round were assuaged as Gasly bagged a place in Q2. With the Williams drivers heading out as usual – George Russell complaining about being sent out in traffic – the fight to avoid elimination came down to the two Alfa Romeo drivers.

Kimi Raikkonen looked on set to make it through but an error at turn 10 spoiled his lap. Antonio Giovinazzi took his chance, and edged Raikkonen out has he took the final place in Q2.

Ferrari and Verstappen, in the sole remaining Red Bull, picked soft tyres for Q2, and therefore the start of the race. Leclerc continued to assert himself, pulling out a six-tenths lead over Vettel as he secured his place in Q3. However he ran along one of the sausage kerbs, scraping the underside of his car.

Vettel was only fractionally quicker than Verstappen and Hamilton. The Mercedes driver, like his team mate, did not opt for the softs. Hamilton and Valtteri Bottas got through to Q3 on mediums, putting them on a different strategy for the start of the race.

The Mercedes drivers were over half a second behind Leclerc after their first runs. Hamilton was closest, and felt he was losing time because of oscillations when he changed gears. The team also believed he had time to gain through turn two.

Vettel was first to beat Hamilton’s time, but Leclerc was conclusively quicker, putting his team mate down by three-tenths of a second. Bottas slotted in fourth ahead of Verstappen.

On his final run, Vettel had what he called a “little wobble” in the last sector. He improved his lap time, but that opened the door for Hamilton, and the Mercedes driver split the two Ferraris, claiming a front row spot.

Leclerc wasn’t happy with his run through the end of the lap as well, but he also found more time and claimed his fourth consecutive pole position by four tenths of a second. Bottas abandoned his final attempt at a lap, and Verstappen took fourth place off him.

Carlos Sainz Jnr claimed sixth for McLaren, followed by Nico Hulkenberg. Lando Norris, who was unhappy with the first half of his lap, backed him up in eighth. Romain Grosjean told his Haas team ninth was probably the best the car could manage after pushing Daniel Ricciardo down to 10th.