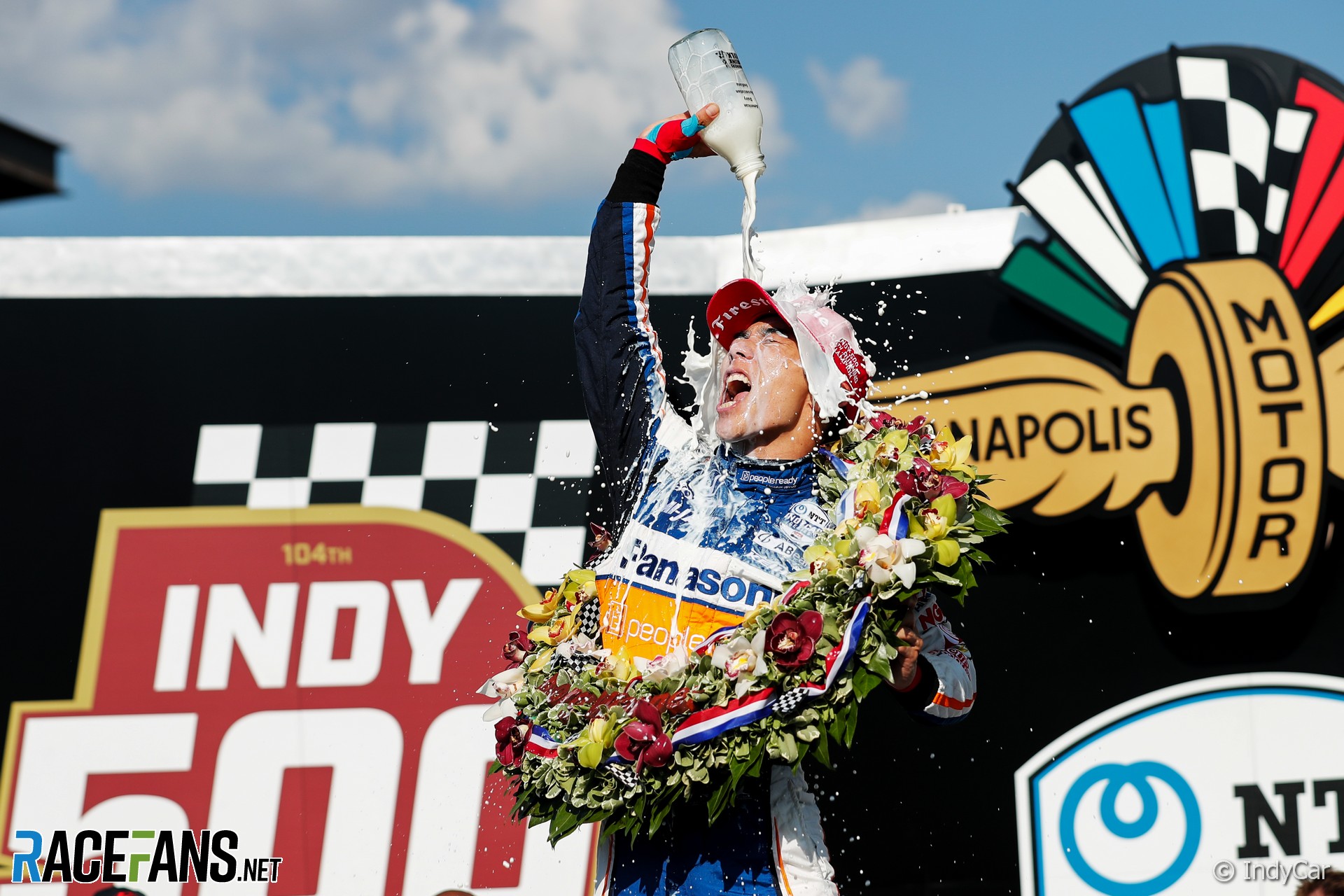 Takuma Sato scored his second victory in the Indianapolis 500 after passing Scott Dixon, who had controlled proceedings for much of the day.

The race ended under yellow flags following a huge crash for Spencer Pigot in the final laps of the race.

Marco Andretti led the field away from pole position but immediately lost his starting advantage to Dixon, who swept around the outside of him heading into turn one. From that moment on, the Ganassi driver looked like the man to beat. But an afternoon littered with Safety Car appearances brought a succession of rivals into his orbit.

A bizarre failure on James Davison’s car seven laps into the race brought an early interruption to proceedings. Debris flew from the front-right wheel assembly of the Coyne/Ware/Byrd/Belardi-run car, followed by a build-up of heat. As Davison tried to bring his car into the pits a full conflagration took hold, forcing him to come to a stop while safety crews tended to the blaze.

A handful of runners near the tail of the field took the opportunity to pit. The remainder headed in later when the first crash of the day prompted a second caution period. Marcus Ericsson, one of Dixon’s two Ganassi team mates, smacked the turn two barrier hard and climbed out of his car.

Dixon led most of the field in and out of the pits. But Ryan Hunter-Reay, who’d gained ground at the start, slipped back when he caught traffic on his way out.

Oliver Askew, who’d been among the first group of drivers to pit, led the field at the restart but soon lost his advantage to defending winner Simon Pagenaud. Both were doomed to lose their advantage when they pitted under green flags on lap 45, at which point quick McLaren SP pit work got Askew back ahead of his rival.

Dixon therefore regained the lead while Askew and Pagenaud took up the chase. The Ganassi driver, wary of his fuel consumption, was content to spend a spell in the slipstream of the last driver on the lead lap, Fernando Alonso, until the numbers on his dash display started to look more encouraging.

Alonso’s place on the lead lap was temporarily saved when Dalton Kellett crashed, triggering the third Safety Car appearance of the day. This was followed soon after by the fourth, as Conor Daly spun on the restart and Askew, following behind, went off with him. The McLaren SP driver hit the SAFER barrier hard, and thankfully climbed out of his car.

The race resumed with half of the 200 laps completed and Dixon leading, while behind Alexander Rossi passed Sato to take up the charge against the Ganassi driver. This fight promised to have real teeth, Rossi having pushed Pagenaud every lap of the way 12 months earlier. But it started to come undone when Alex Palou hit the wall, causing the fifth caution period.

The field headed to the pits en masse but Rossi, following a slow right-rear wheel change, emerged from his pit box into the side of Sato. Race Control were quick to announce an investigation and soon afterwards ordered Rossi to drop to the tail of the field.

It was the beginning of the end. The 2016 winner was soon on the attack, passing a string of cars, aided by Pagenaud slowing dramatically when he nudged the rear of Hunter-Reay. But on the 145th lap Rossi twitched wide at turn two and thumped into the barrier, ending his day.

The race resumed with 45 laps to go and the field needing one more pit stop to reach the chequered flag. Dixon led Sato, while behind them Josef Newgarden moved into third at the expense of Graham Rahal.

Once the remaining drivers pitted, Sato became the true leader and was on course for a repeat of his 2017 victory. Dixon was in hot pursuit but the Ganassi driver didn’t seem as strong in the final laps, and Sato made light work of the inevitable traffic.

With five laps to go the race was decided, ironically, by one of Sato’s team mates. Spencer Pigot lost his car at the exit of the final corner and spun backwards down the straight. But moments before striking the pit lane divider his car snapped broadside. Pigot suffered a heavy impact with the barrier which sent his car flying back across to the other side of the track.

Happily, the RLL driver was recovered from the car. But with the barrier needing extensive repairs, race control decided against red-flagging proceedings, and let the race finish under the seventh caution period of the day.

Sato’s other team mate, Graham Rahal, followed Dixon in third ahead of Santino Ferrucci and Newgarden. Pato O’Ward, who had his McLaren SP up to second at one stage, collected sixth. His team mate Alonso had an anonymous third appearance at the speedway, finishing a lapped 21st.