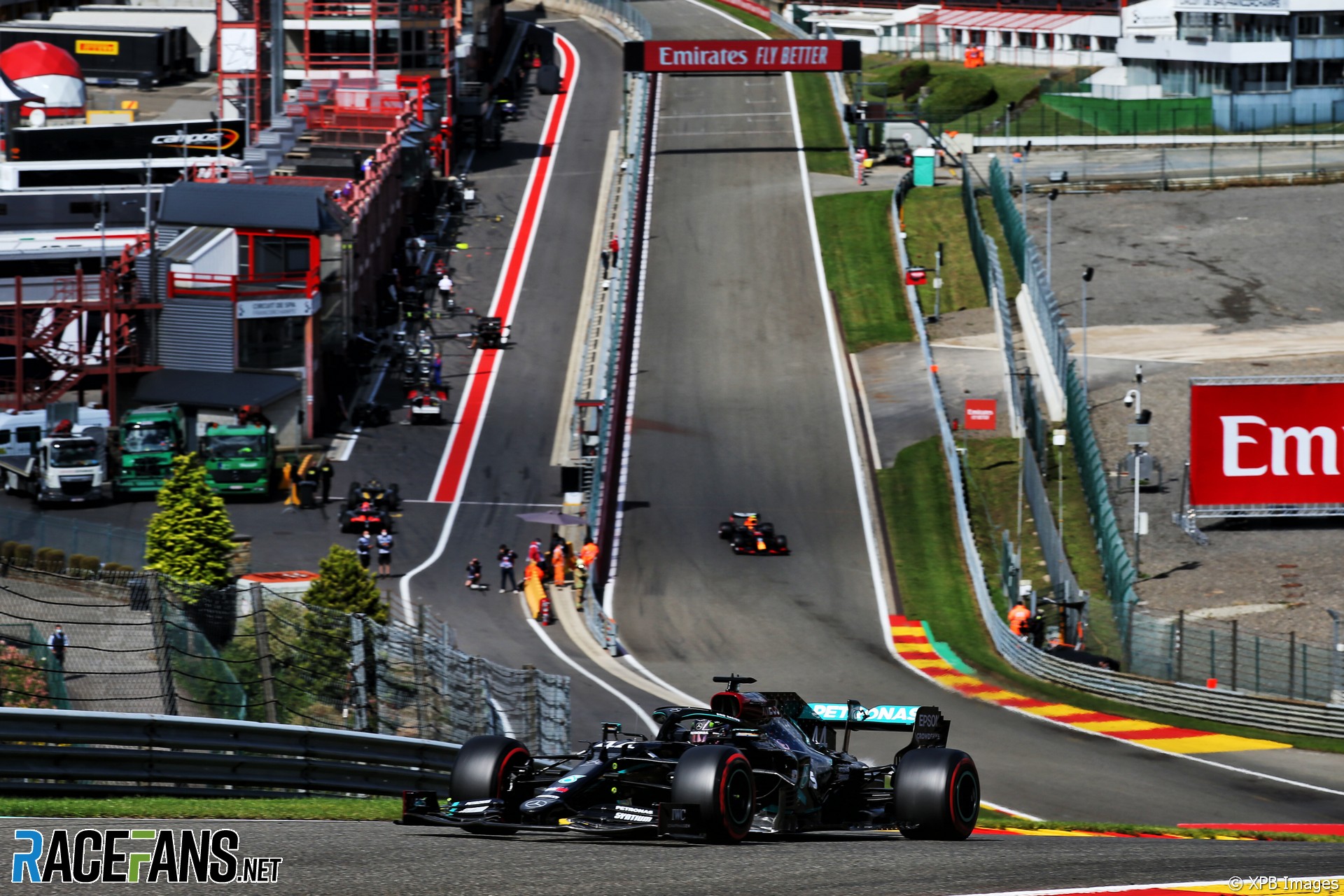 With the possibility of rain hanging over the Belgian Grand Prix, teams faced a set-up dilemma ahead of qualifying.

A lower downforce level could help them overtake on the straights in the dry, but will be more of a penalty if race day is wet. Running more downforce could also help prolong tyre life – particularly important if the race remains dry, given that Pirelli has brought a softer tyre range than last year.

While the differences between ‘wet’ and ‘dry’ set-ups are more subtle than in past seasons, there is a distinction. The cars’ performance through the winding middle sector tends to show it up best, and it was here that Mercedes were especially impressive in qualifying. Lewis Hamilton was more than half a second faster than anyone.

Despite having what is, by general consensus, the best engine in the sport, Mercedes will have traded off some straight-line speed by running more wing. They can afford to do so, but they expect it could put them at greater risk at the start.

“The run down to turn five [Les Combes] is going to be one of the more worrying moments of our race,” said the team’s trackside engineering director Andrew Shovlin. “Because with the slowest car of the top four [in a straight line] getting that right is going to be a challenge.”

The Mercedes pair swept the front row of the grid as usual, but they see both third-placed Max Verstappen and fourth-placed Daniel Ricciardo as threats.

“You’ve got Verstappen who’s quicker than us behind,” said Shovlin. “He’s got a couple of tenths and that’s going to be a few car lengths when you get down to turn five because they’re doing 300kph by that point so two tenths is quite a lot of distance.

“Behind him you’ve got Ricciardo, who’s even quicker again. He was about 8kph up on us. So, to be honest, that’s going to be quite an exciting part of the race. And then if we keep getting Safety Cars we get to do it each time again and again.”

Friday also made it difficult to build up a picture of the relative strengths of the different teams over a race distance, according to Shovlin.

“One of the problems of Friday was there was red flags and VSCs and things. You’re trying to piece together the learning from literally a handful of laps. We got like three laps to try and base it on and everyone was trying to learn on different tyres.

“So there is very little data and our poring over that data leads us to believe that [Red Bull] are about the same speed as we are. Now, you never quite know what fuel load they’re running or engine mode. They’re normally closer to us in the race than they are in quali. And here they’re closer in quali than they have been at other circuits. So I think it’ll be pretty close.”

Red Bull, aided by their recent updates, were closer to Mercedes in qualifying than in recent races, and have consistently been much closer on race day. It does look like being a closer fight than the last race at Circuit de Catalunya, but there’s no denying Mercedes go into the race with a clear upper hand.

Will Mercedes take another routine one-two at Spa? Can anyone challenge them in dry or wet conditions? And what can Ferrari do after their dismal qualifying performance?