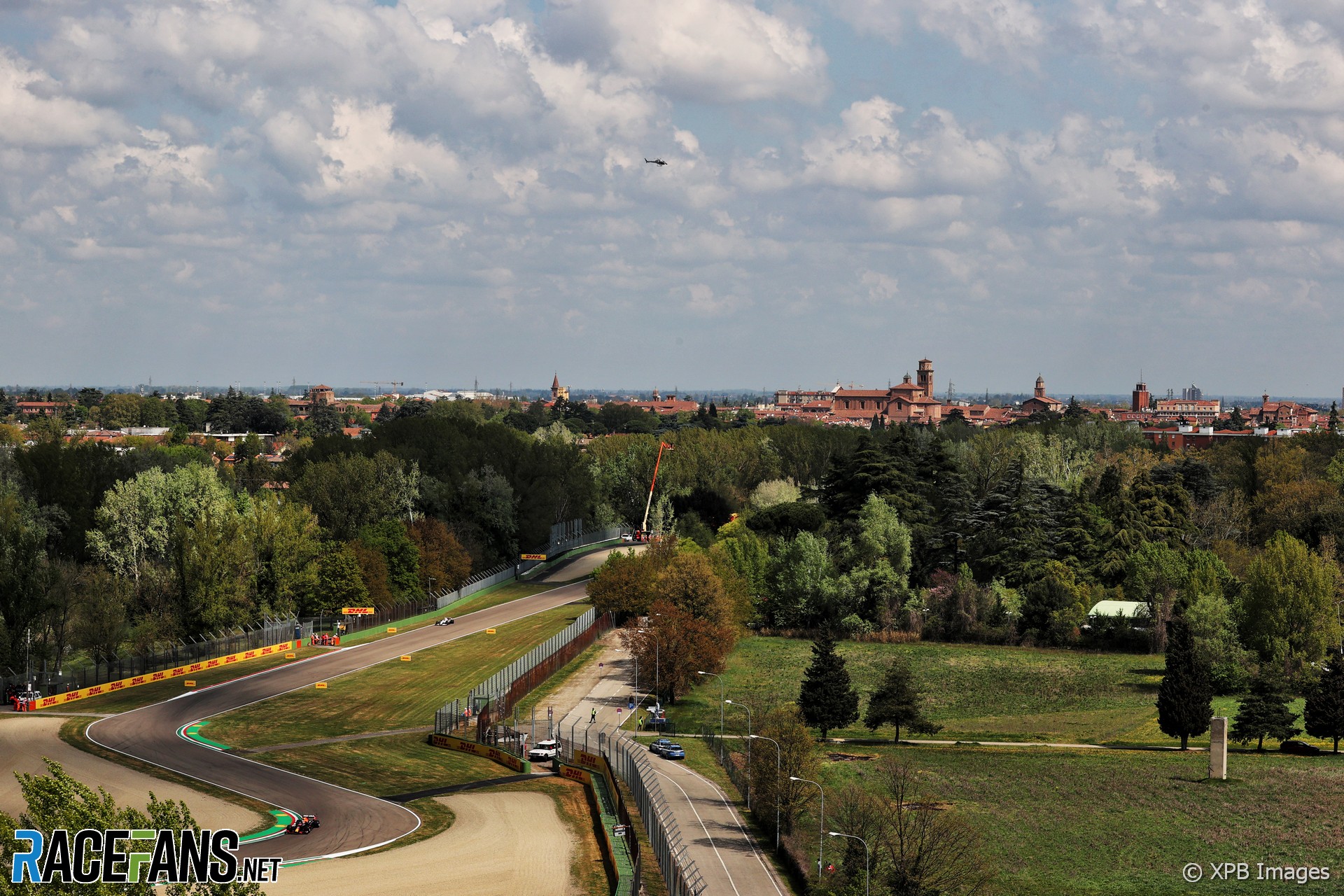 Why was Max Verstappen’s stricken Red Bull taken for a “sightseeing tour of the local town”? And what was behind the ‘fibre line fault’ which disrupted coverage of practice? Dieter Rencken brings the latest from Imola.

Having flown in from Brussels on an evening flight, I overnight in Milan and drive through to Imola at 8am – a pleasant two-and-a-bit-hour motorway drive. We’d been warned about stringent health and documentation checks due to Italy’s Covid-19 situation, but surprisingly a temperature check prior to boarding was the extent of it.

I was delighted when F1 last year decided to return to the Enzo e Dino Ferrari Autodromo situated outside the town, on the banks of the Santerno river, and the same pleasures prevail as I drive through the tree-lined avenues to the circuit. The place epitomises all the pains and pleasures of our beloved sport, its highs and its lows, and its deceptively quaint nature perfectly captures the essence of F1. Long may we return.

With increased media numbers – approximately double compared to this event last November – the press centre has been moved and is situated in a room above the pit lane grandstands, so open air viewing will be the order of the weekend. 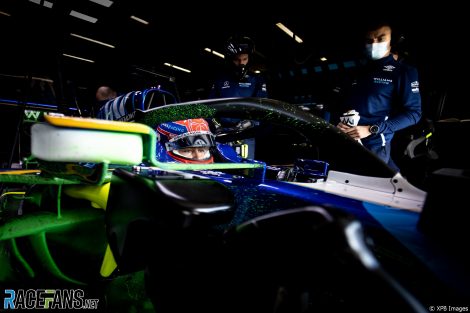 That makes for a pleasant change: the last time I enjoyed close-up spectating was in 2019. Things are moving (ever so) slowly in the right direction – although it’s inevitable that some races will still be cancelled, with Canada’s grand prix on the hit list. The question is, though: which circuits will replace the canned events? I’m hearing that either Istanbul or Nürburgring are in the frame should Montreal drop out.

My Thursday proper starts at 2pm with the FIA conference. The he order has been shuffled: rather than have drivers lined up Noah’s Ark fashion in reverse championship sequence – so Carlos Sainz Jnr (Ferrari) and Sergio Perez (Aston Martin) set the scene. The format makes for a pleasant change, particularly as it prevents identical answers to questions posed to team mates. They can also slag each other off more freely.

After the session I have exclusive interviews scheduled for the ‘mix-zone’, an area situated on the roof of the garages where different ‘bubbles’ can meet on a segregated basis. George Russell is one candidate, and he increasingly impresses me with his maturity and insights. We’ll be bringing you his comments over the next week or so, and rest assured they are well worth waiting for.

As example, I asked him what the biggest take-away from his substitution drive in Bahrain last December was. “That in a winning car the peaks are higher, and the valleys deeper,” he says without hesitation. A race winner in the making, certainly – and potentially a future champion.

Home for the weekend is an ‘agriturismo’ – a bed-and-breakfast on a working farm – situated around 15 minutes from the circuit en route to Faenza, better known as home to AlphaTauri. Cheap and cheerful – and all one needs.

Arrive at 9:00 and head straight for Covid-19 test centre – the protocol is that we are required to be tested within 24 hours of first entering the circuit, regardless of any timing of previous tests. 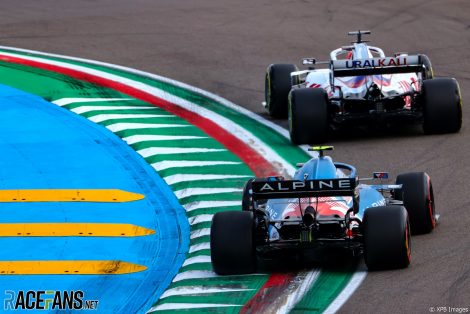 First practice is blighted by data failure – as reported here a fibre optic cable is believed to have severed, causing a breakdown in communications between the circuit and F1’s ‘nerve centre’ situated in Biggin Hill, a operation with an expanded workload due to the increased amount of remote working due to Covid. The session starts without any moving car footage and other glitches

The breakdown results in various peculiarities: for example, lap time deletions for track limit breaches are made after the session, while teams are unable to warn drivers of faster or slower cars in their midst. No replays or angle shots of the Ocon/Perez clash are available due to the cable problem, and the stewards find that the lack of radio communications contributed to the incident.

Red Bull’s laconic F1 consultant Helmet Marko later questions why teams bother to fit rear-view mirrors to their cars if they prove all but useless.

The FIA presidential elections in December are a hot topic amongst F1 folk, with much speculation as to whether it will be a two- or three-horse race. One thing is certain: whoever secures office for the next four (or more) years faces a landscape substantially different to that inherited by current incumbent Jean Todt, who arrives at the circuit on Saturday. Hopefully we’ll have an opportunity of quizzing him about this and other topics.

Second practice provides another pointer to Imola’s unique layout and character: Five laps into his session Verstappen’s Red Bull comes to a halt just beyond the pit lane exit with as suspected driveshaft failure. Regulations prevent the team from retrieving the car, so it is loaded on a flatbed to be returned to the garage.

All good thus far, except that the quickest route for the truck is out of the top gate, across the bridge over the river and down the town’s streets and back through the circuit’s bottom entrance. All and sundry caught glimpse of the car’s trick rear suspension, much to the irritation of the team.

“Unfortunately the car went on a bit of a sightseeing tour of the local town from what we could see from the onboard camera as it came and was delivered back to the top of the pit lane,” said team principal Christian Horner. “So it just didn’t allow enough time to get it sorted. So it’s frustrating to lose that track time, particularly in a shortened session as well.” 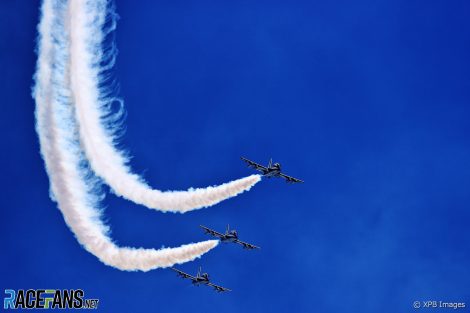 After the session, Formula Imola, the track’s management company, distributes a release about attaining the first level of the FIA’s Environmental Accreditation Programme, an initiative that includes planting of trees in the Parco Acque Minerali, situated entirely within the circuit. Rather perversely they choose to issue it in hardcopy paper form just as air force jets crisscross the skies above in preparation for Sunday’s flypast…

As I pack-up I’m advised of the death of Richard Parry-Jones, former Ford technical director and a true car man who led the Blue Oval’s motorsport programme, in a tractor accident. He mentored newly appointed Williams CEO Jost Capito during his Ford tenure, and recently joined the board of Aston Martin. Indeed, Jost and I had discussed him in Bahrain.

My sympathies to Richard’s family, and his many friends in motorsport.