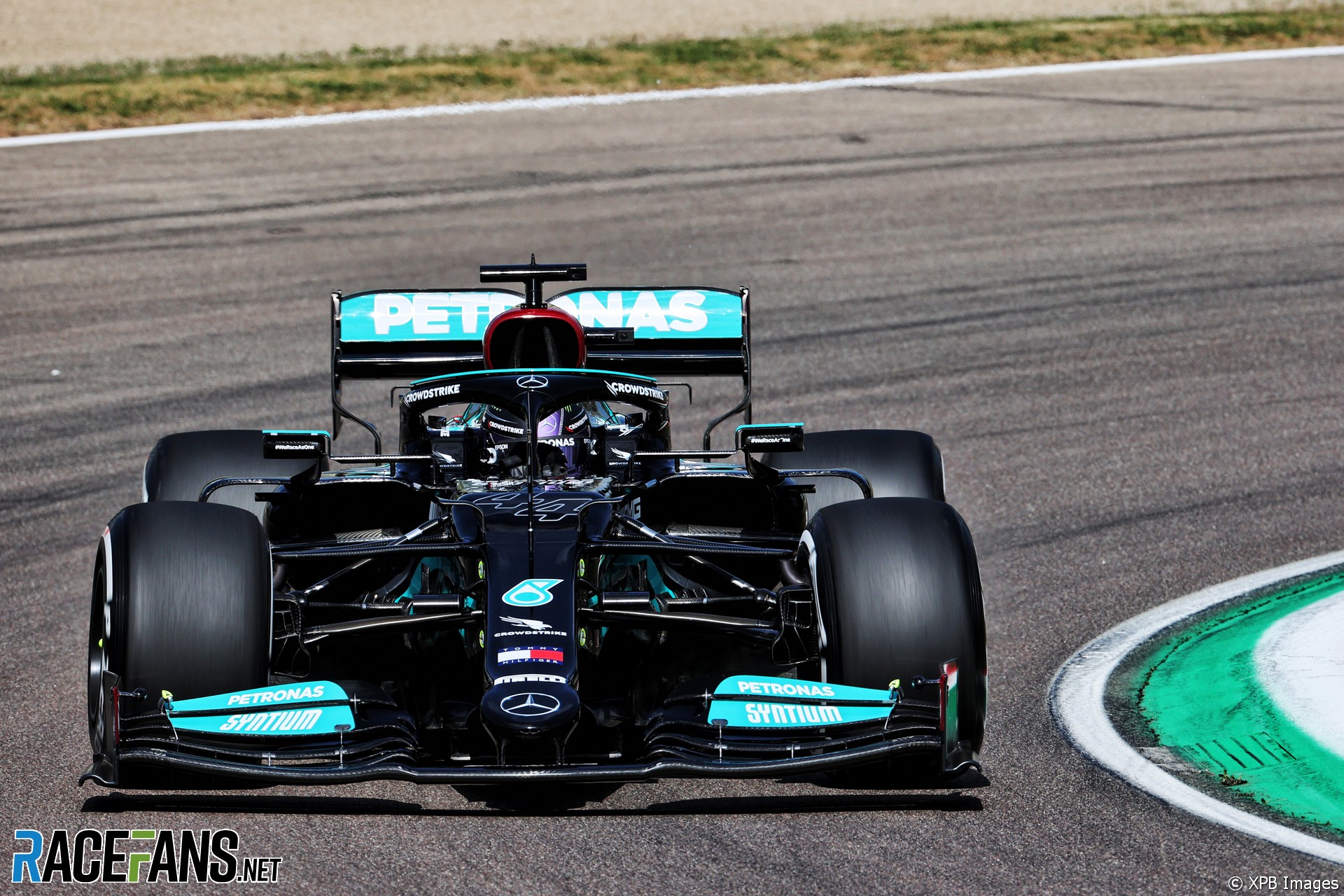 But Hamilton will have to defend from both Red Bulls alone in tomorrow’s race as Mercedes team mate Valtteri Bottas could only manage eighth place on the grid.

It was Hamilton’s 99th career pole, while Verstappen was outqualified by his team mate for the first time since the 2019 Canadian Grand Prix.

Charles Leclerc will start fourth, ahead of Pierre Gasly and the McLarens of Daniel Ricciardo and Lando Norris.

The Imola circuit was slowly warming up under the Italian sky when the green light signalled the start of the opening session of qualifying for the Emilia-Romagna Grand Prix.

The first attempts for many drivers were ruined when the session was red flagged as Yuki Tsunoda lost control of his AlphaTauri at the Variante Alta chicane and spun rearwards into the barriers, causing major damage to his car despite the relative low speed impact. The Japanese rookie was able to climb out of the stricken car unhurt and the session was promptly restarted.

Sergio Perez’s first timed effort was deleted due to a track limits infringement, along with Pierre Gasly in the AlphaTauri for running too wide on the exit of Variante Alta.

As the chequered flag flew, Nicholas Latifi put in an impressive lap to move into 12th and safely through to Q2. That left George Russell at risk of being out-qualified by his Williams team mate for the first time in his career, but Russell was able to improve and also qualify for the second session.

The two Alfa Romeos of Kimi Raikkonen and Antonio Giovinazzi were also stranded in the drop zone. The pair were unable to improve and were both knocked out, in 16th and 17th place respectively. They were joined by the Haas pair of Mick Schumacher and Nikita Mazepin, with Yuki Tsunoda in 20th having failed to set a time.

As the second session got underway, both Mercedes of Lewis Hamilton and Valtteri Bottas and the Red Bull of Max Verstappen all ventured out on circuit on the medium tyres.

Hamilton went quickest of the trio on their first flying laps, less than a tenth of a second faster than Verstappen, before Lando Norris set the best time of the weekend so far on the soft compound.

Pierre Gasly’s first effort on the soft tyres was deleted for exceeding track limits, as was Sebastian Vettel’s in the Aston Martin.

Sergio Perez went fastest of all on the soft tyres, with Verstappen, Hamilton and Bottas all choosing not to complete flying laps on the soft tyre at the end of the session.

With the gap between the fastest time and the Q3 cut-off in tenth less than half a second, it was a tight conclusion to the session.

Carlos Sainz Jnr was the biggest surprise, being the first driver eliminated in the Ferrari in 11th. George Russell was vocally frustrated over team radio to miss out on Q3 by just under a tenth-and-a-half.

Sebastian Vettel failed to make it through and was eliminated in 13th, ahead of Nicholas Latifi and Fernando Alonso in 15th in the Alpine, out-qualified by a team mate for the first time since 2017.

As in Bahrain, the fight for pole position looked to be a straight shoot-out between Hamilton, Verstappen and Bottas.

After the first run, it was Hamilton who held the advantage, taking provisional pole by just under a tenth from Verstappen with Perez in the second Red Bull two tenths back and Bottas half a second adrift in sixth.

Lando Norris’s first effort was good enough to see him in fourth place in the McLaren, while Lance Stroll’s first lap time was deleted for exceeding track limits.

Track temperature breached 30 degrees for the first time all day as the top ten cars filed out for the all-important final laps of qualifying.

Despite the optimal track conditions, neither Hamilton, Verstappen or Bottas was able to improve on their best time. Norris briefly jumped up to second, before his effort was removed due to track limit infringements.

This left an opportunity open for Sergio Perez and the Mexican leapt up to second to secure the first front-row start of his 11-season F1 career ahead of Verstappen, who lost time with an error.

With Red Bull and Norris falling short, Hamilton’s pole position was assured. It may be the 99th of his career, but race engineering Peter Bonnington was nonetheless taken aback, given how far behind Red Bull they had been in Bahrain. “That’s a surprise,” he exclaimed on the radio, he and driver audibly delighted by the result.

Charles Leclerc will start fourth in the Ferrari, with Pierre Gasly consolidating AlphaTauri’s impressive weekend pace with fifth on the grid.

The two McLarens of Daniel Ricciardo and Norris will start sixth and seventh, ahead of a disappointed Bottas in eighth. Esteban Ocon and Lance Stroll completed the top 10.

107 comments on ““That’s a surprise!”: Hamilton beats Perez and Verstappen to Imola pole”