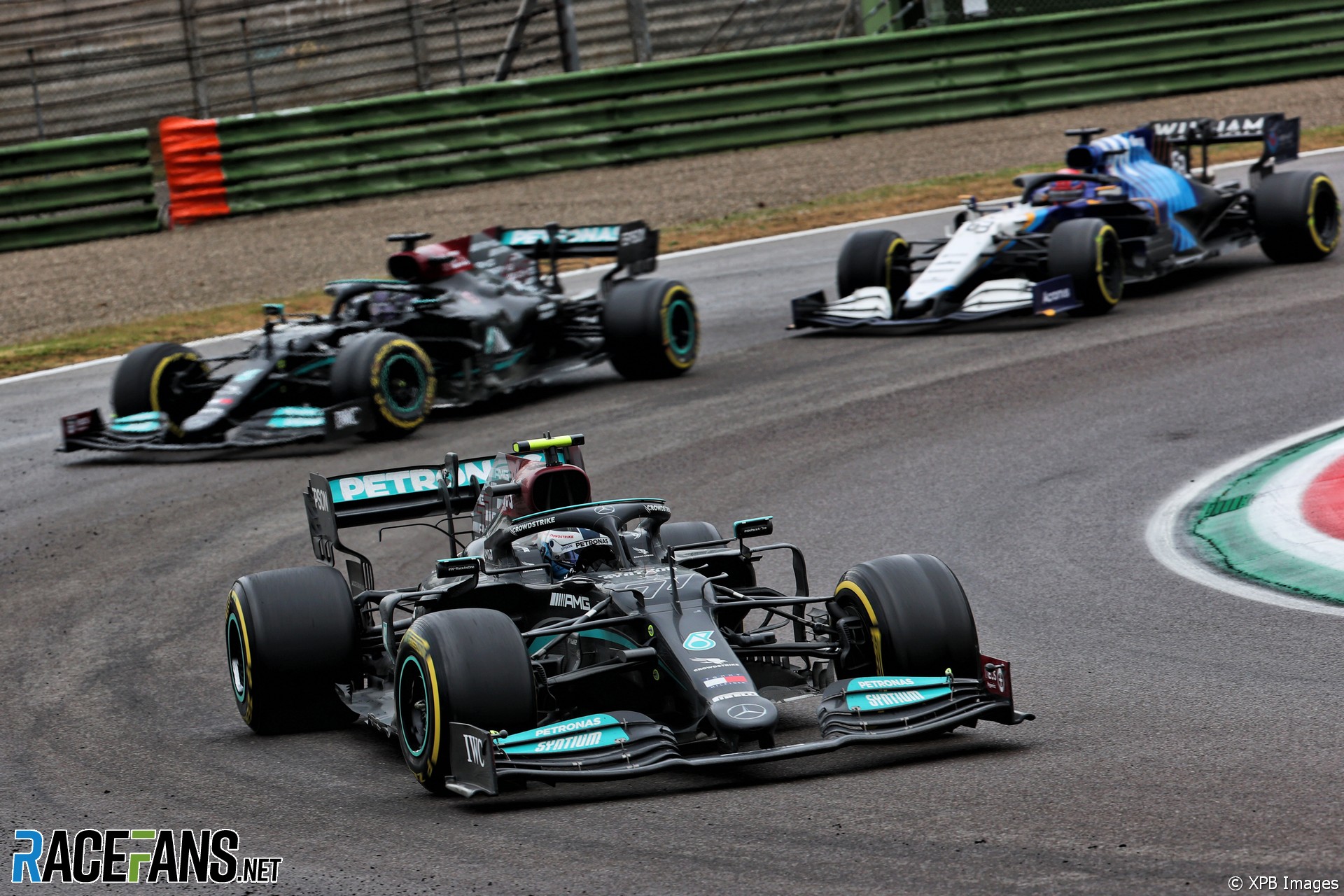 In the final moments of the qualifying session for last year’s Abu Dhabi Grand Prix, Mercedes CEO Toto Wolff came on the radio with a few words of encouragement for his driver Valtteri Bottas.

“All you have, Valtteri,” Wolff urged. Not a strange thing to do in itself, though it broke with convention, as Wolff had seldom been heard speaking to either of his drivers during previous weekends.

It later emerged the pair had spoken about how they could do more to inspire better performances from each team member. Wolff’s radio message spurring Bottas on was a product of that.

It didn’t quite produce the desired effect: Max Verstappen pipped Bottas to pole position by two hundredths of a second. But no one could deny Mercedes were doing everything to support their driver, a week after he’d been eclipsed by the team’s substitute George Russell in Bahrain.

Bottas got his Imola weekend off to an encouraging start. At the track where he took pole position last year, Bottas topped both practice sessions, raising hopes of a repeat performance.

It wasn’t to be. Throughout Saturday the optimum temperature operating window for his Pirelli tyres eluded him. Lewis Hamilton parked the other W12 on pole position, Bottas the best part of half a second away. At the beginning of last season that gap would have meant second on the grid for Bottas. But the field is much closer in 2021, so he lined up eighth.

Strikingly’, Hamilton has described the handling of Mercedes latest car as “knife-edge”, and Bottas used the same phrase when explaining his ongoing struggle to match his team mate’s lap times.

“It’s a bit [of an] overall thing with our car over the years,” said Bottas. “We quite often struggled in hot conditions and cool has been normally good because we’ve had good tyre warm-up.

“So we’ve been really trying to develop the car that we don’t overheat the tyres. But that’s come obviously with a negative, that if we need to get quickly temperature in the tyres, some other cars can do it better than us.

“For me personally, for example compared to Lewis, it’s so in the knife-edge in qualifying. Sometimes you get it [to] work, like for me in Q1 when I did a much faster time.

“But for some reason I just couldn’t get them to work in Q3 in the same way. So it’s all about one or two degrees of surface or tyre bulk temperature. It’s hard to explain. Obviously track temp was changing a bit, depending on how much there was cloud et cetera, so maybe that had a bit of a factor.”

While Bottas could produce competitive times after multiple laps on new tyres, he couldn’t do it when needed on the first run, explained the team’s head of trackside operations Andrew Shovlin.

“He did look very strong on Friday and was in a good position, very happy with the car. In qualifying he seemed to be struggling a little bit more for the tyre temperature than Lewis.

“The lap that he did in Q1 on his first run would have would have put him in the top four. He just couldn’t match that lap. That was the third lap of the tyres, moving to the first lap he wasn’t really able to match that.

“So there’s something that we need to understand. The thing with tyre temperature though is often a very small difference has a very big impact on grip.”

These problems appeared to be amplified over the wet opening laps of the race. Bottas lost two places at the start, got stuck behind Lance Stroll’s Aston Martin, and the gap between him and Hamilton in second place opened up quickly. From the moment the Safety Car came in, when racing resumed, until Wolff’s message just eight laps later, Bottas lost 49 seconds to his team mate.

That is a huge loss, and it’s important to stress there were seven cars (initially) between them, each generally losing ground to the car ahead. But the difficulty Bottas was experiencing brought back memories of his labours in last year’s Turkish Grand Prix, also held on a wet track, though on that occasion he could at least point to car damage as a contributing factor to his problems.

Bottas’s spectacular retirement on Sunday in a collision with Russell, who is widely believed to be first in line for his seat, commanded a lot of attention after the race. It was clear Mercedes took a dim view of Russell’s role in the crash, even if the stewards deemed it a “racing incident”.

But while Russell took the heat in public, behind the scenes Mercedes must be asking why one of their cars was under attack from a Williams in the first place. And, for that matter, why on the lap before the collision Bottas was set to be lapped by Hamilton.

The furious criticism Bottas levied at Russell on his radio, and scenes of him greeting his rival with a raised middle digit after the crash, were ‘heat of the moment’ stuff. As he pointed out afterwards, despite months of speculation Russell could replace him, there is no great animus between the two.

“To be honest, I’ve never really worked that closely with him,” said Bottas. “Obviously, he’s been around for some time because he’s been reserve driver and done some tests for the team and some simulator work. So I know him a little bit. There’s never been any issues and no, nothing changed in Bahrain in terms of that.

“From my side, no issues. But [it] was not ideal because he made me lose a good chunk of points potentially, and I think it was his mistake.”

But there lies the rub: Russell wasn’t about to deprive Bottas of a “good chunk of points”; the Mercedes was heading for precisely two points when they crashed. That will concern them more than the momentary misjudgement by a driver who was trying to overtake one of their cars in a Williams.

“George should have never launched into this manoeuvre,” said Wolff after the race. But, as he also noted, “Valtteri had a bad first 30 laps and shouldn’t have been there.”

It’s starting to look like the words of encouragement will soon need to be replaced by something firmer.

Communications between Bottas, race engineer Ricardo Musconi and Wolff from the first restart of the race until the crash which put the Mercedes out.