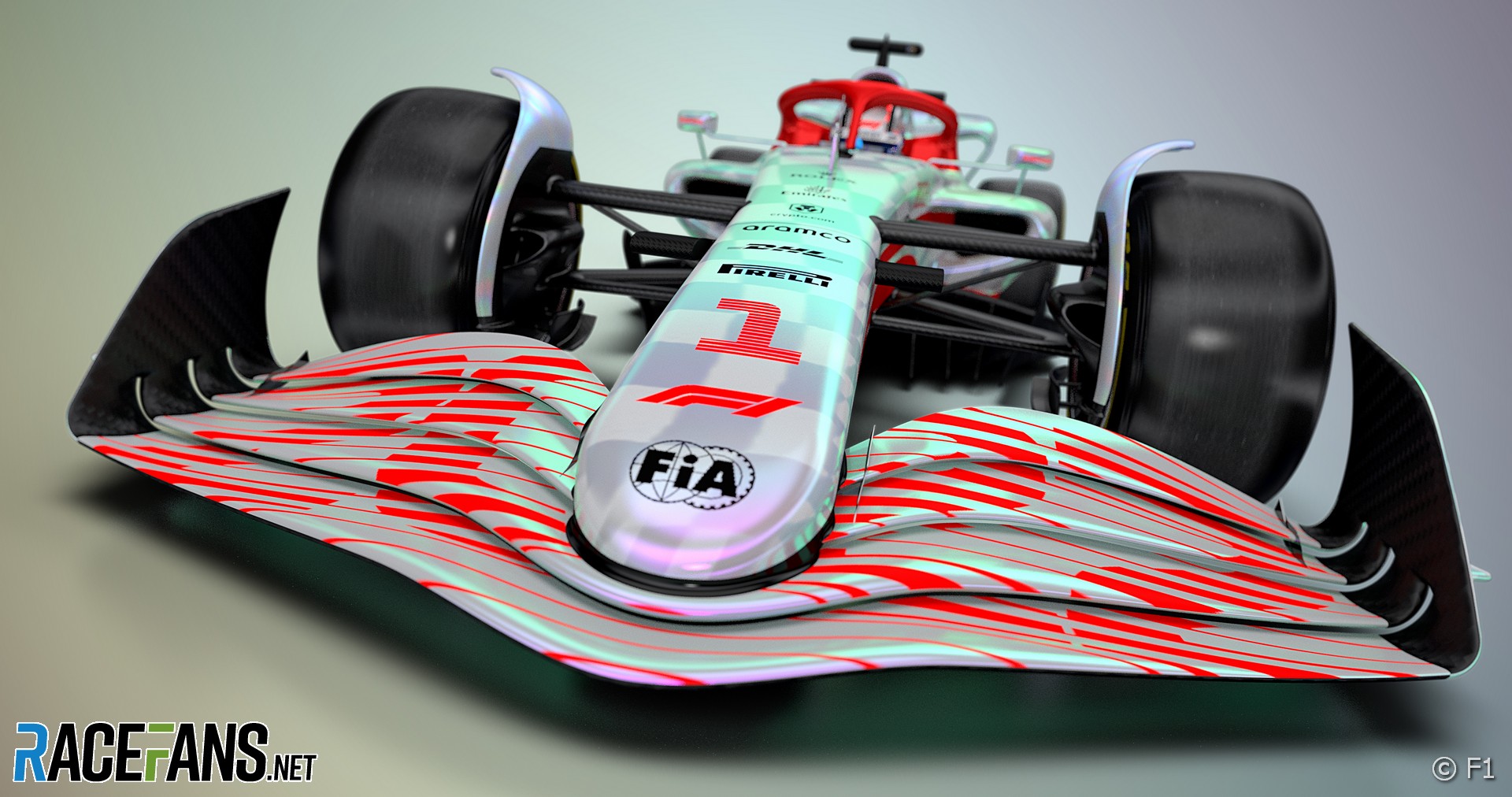 Formula 1 will today reveal the first full-size model of a car designed to its radical new technical regulations for the 2022 season.

The new rules, which were intended for introduction this year but delayed as a cost-saving measure due to the pandemic, are the product of extensive research into how to make it easier for F1 cars to race closely together.

This is a problem Formula 1 has tried to tackle before, with limited success. In 2009 new rules devised by the Overtaking Working Group were introduced to improve the racing. Its success can be gauged by the fact just two years later F1 resorted to another, more drastic, overtaking aid in the form of the Drag Reduction System.

Reducing downforce, and therefore the turbulence which makes it hard for cars to follow each other closely, has long been seen as key to improving racing. But F1 has faced the repeated problem that attempts to cut downforce have been thwarted by the immense development power of the teams.

But now it has two advantages on its side: The rules increasingly restrict how much development teams can do, while F1 can harness impressively new levels of computing power, which one of the people running it describes as “face-melting”.

Former Williams and Ferrari engineer Rob Smedley is now Formula 1’s director of data systems. He says F1’s development power is “orders and orders of magnitude bigger” than what teams have access to under the aerodynamic testing restrictions. This was crucial to devising new rules which would finally pin teams down to producing cars which can race each other closely without sacrificing F1’s high performance levels.

“That’s why we at Formula 1 were able to support in such a crucial way the FIA in defining these regulations. We were able to go outside of that aerodynamic test restriction and we were able to say, right, this has all got to be about compute power.”

While teams’ design efforts are focused on the performance of a single car in isolation, Smedley says F1 knew it needed to simulate the behaviour of two cars in close proximity. The cost of doing this in a full-scale wind tunnel would be prohibitive, but Computational Fluid Dynamic simulations offered a solution.

“If you want a two-car CFD – one car following the other, full-car CFD simulation – and you want to be able to rapidly iterate across lots of design concepts, this is going to have to be quicker than what we could do under the aerodynamic test restrictions, where typically half [scale] of a single car will take you four hours.

“We were into four days, when we first started off, four days to do a single simulation or a single design iteration, which is just not efficient enough. So that’s why we partnered with AWS.

“Finding that solution, the thing just runs like a machine now, but [this] to me is a really, really impressive stat and a really impressive way that we’ve been able to use the partnership to such great effect: We are down to like seven hours now per simulation, per design iteration, which is just insane.

“If you’d have told me that when I was in the team environment, even going back, technology moves so fast. If you were talking about that five years ago, I’d have just thought you were mad.”

Formula 1’s simulations of cars built to the new rules – and the effect the aerodynamic wake of one has upon another – involved the analysis of over 550 million data points.

“When we were pushing through the peak number of jobs in one day we were at seven-and-a-half million cells to calculate across the CFD mesh and around about 7,000 cores we were spinning up at the same time in the EC2 service,” says Smedley. “That is just face-melting compute power.”

The rules, which are ultimately defined by the FIA, went through further development in conjunction with teams. F1’s chief technical officer Pat Symonds, who has decades of experience with championship-winning F1 teams, was at pains to weed out any areas of the rules which could have unintended consequences.

“Pat Symonds and his team when they were developing the 2022 car they did lots of rounds and iterations of ‘poacher-gamekeeper’,” said Smedley.

“So you get the first proper design iteration out that you’re happy with, the first iteration of the rules, and then it’s getting people to read through that and see where the loopholes are and then tightening it again and using the CFD and redesigning for certain aspects of it. And then doing this whole process again and going through the loop a number of times to try to get to a reasonably tied down aerodynamic rule set.”

A smaller wind tunnel model of the planned car was presented into 2019 before plans for its introduction had to be put on hold. The design includes several changes specifically intended to aid close racing including simper upper surfaces, the use of large ‘tunnels’ under the floor to generate downforce and strakes over the front wheels to further improve the airflow for a following car.

We’ll have to wait until next year to see whether Formula 1’s latest attempt to aid overtaking will succeed where others have failed. But the design will be presented today has benefitted from technology which Smedley and his team could only have dreamt of a few years ago.