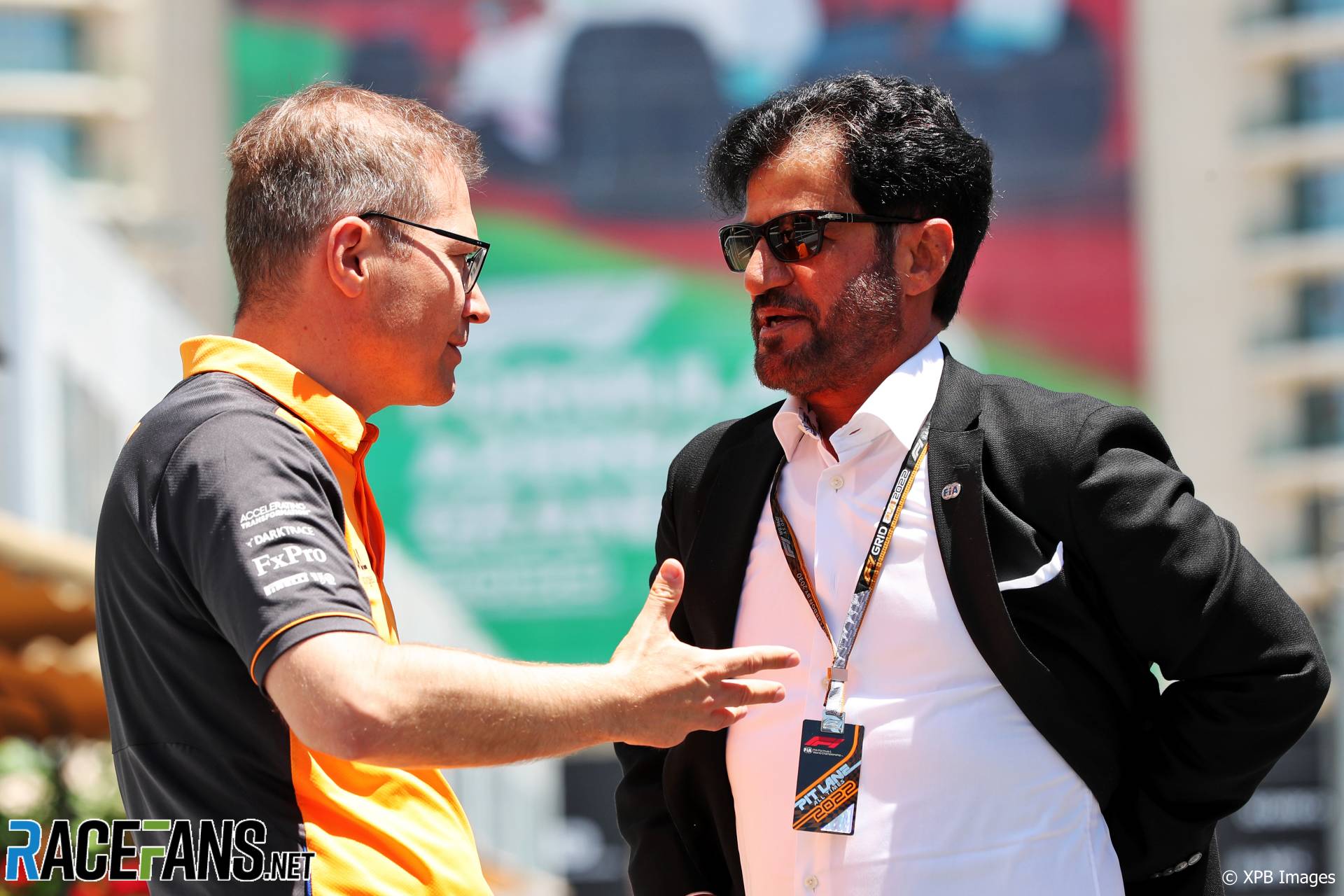 In the round-up: McLaren team principal Andreas Seidl says F1 teams share responsibility for some of the sport’s confusing and unclear rules.

Last weekend’s Japanese Grand Prix saw confusion at the finish when the race appeared to end one lap too early, then full championship points being awarded despite the race only just covering half of its original scheduled distance. Seidl says teams take some responsibility over the confusing rules due to failing to foresee problems arising during discussions with the FIA.

“I feel responsible for this as well, because in the end, we do this review each winter and each team has the opportunity to bring up points that are not clear, for example,” Seidl said.

“And I didn’t go into the full details yet with the team, what exactly the loophole was. We understood everything we have defined together with the FIA in Formula 1 – after Spa, it’s only valid if the race doesn’t finish normally and that’s clearly something we have all overlooked is that’s the case. Therefore, we are responsible for trying to do a better job over the winter and to close the loopholes if there are any left.”

Boroumand held off pole-winner Frederik Rasmussen on the final lap, eventually crossing the line just over a tenth of a second ahead of the Red Bull driver to secure his first ever victory in the F1 Esports professional series. AlphaTauri’s Josh Idowu claimed the final podium place in third.

With his win, Boroumand moves up to fourth in the drivers’ championship ahead of double world champion Jarno Opmeer. Rasmussen’s second place helped him to cut McLaren Shadow driver Lucas Blakeley’s championship lead to just five points. Round six, around Zandvoort, will take place this evening.

Formula E says TV viewing figures for its 2022 season were at an “all-time high” for the all-electric racing series.

The 2022 Formula E championship spanned 16 races – the most in the series’ history – with a revised ‘duels’ qualifying format. Formula E claimed live TV audiences grew by 10% compared to 2021 to 216m viewers, with a 20% growth in total audience to 381m.

The 2023 championship – ushering in the new Gen3 era of Formula E – is due to begin in Mexico City in January.

"Vietnam inked a 10-year deal with Formula 1 in 2018, betting that the glamour of the sport could reshape Hanoi’s staid image, and reflect the country’s economic lift-off. Costing Vietnam $60 million a year, the fee was to be picked up in full by the country’s largest private conglomerate, VinGroup, which had been hoping to dazzle with a night race."

The inside story behind our Japanese GP strategy call (Williams)

"'We didn't really say much on the radio so as not to give competitors too much information about what we were going to do,' Erny said, in a demonstration of the secrecy in the sport before continuing: 'In the end, we thought more people would come in, but they didn't.'"

There is a large motorsport representation in this year's British Broadcast Sport Awards, including FOM nomination for 'best international programme of the year' for coverage of the 2021 Abu Dhabi Grand Prix, David Coulthard for 'pundit of the year' and Alex Jacques for 'commentator of the year'.

Brundle on inventing the grid walk, driving legendary cars, and why the sport should always be a little scary (GQ)

"I came through a fairly hard phase where drivers were injured, and drivers were killed, and that's the nature. I saw my team mate get killed. And even my son's been in two or three races where a driver has been killed, and he's a generation down the road. So you've already mind-managed the danger of it."

"FIA President Mohammed Ben Sulayem announced today the creation of the first ever FIA motor sport engineering scholarship at Cranfield University. This is a unique global talent search initiative which provides a pathway for a talented young engineer from one of the FIA regions to obtain a Master’s in Advanced Motorsport Engineering."

"There are just 10 cars entered for this weekend’s Euroformula season finale at Barcelona, and there are rumours that it could be the series’ last ever event. Extra entries normally join for the final round, with a season never ending on less than 15 cars before, but that is not the case this year."

Ernesto Desiderio, @NicholasLatifi's Race Engineer, reflects on the factors that led to that all-important call to pit from the #JapaneseGP restart 🙌#WeAreWilliams

We ❤️ the creative generosity of our Japanese fans 😊🇯🇵#HaasF1 pic.twitter.com/mK2Es8i8IX

you got it! ✌️ pic.twitter.com/r9hDWxLyAD

That’s fair. I accept that we didn’t offer the fully balanced view in that first clip, however a few minutes later, I clarified the point.

I thought initially the point about the truck had been made by several others and it was obvious, but clearly I shouldn’t have assumed that

🎙 THE DRIVER! 🎙@alicepowell is set to host an epic podcast series, entitled #TheDriver! Her first episode drops soon, featuring some very familiar #BristolStreetMotors faces… Can you spot who? 👀💙

Our latest hotfix tackles a bunch of user reported issues.

Thank you for your patience! #beACC

With Max Verstappen sealing his second world title, @todfod is left in awe of the double world champion’s performance this season…

It’s kind of hard to describe just how good Max was this season. I’ve never seen a driver just dominate his rivals and team mate in a fashion he did this season. It doesn’t even matter how many grid penalties were applied, or what his starting position is, he just cut through rivals like a hot knife on butter every Sunday.

Schumacher’s 2002 was a remarkably consistent season, but at no time did I ever feel Schumacher was a league above every driver at every race. The Ferrari was far too ahead of any of its rivals, and the only challenger for Schumi was Barrichello, who had a contract in place which prevented from really racing Michael. So, I couldn’t say this was season for Schumi was any better than Lewis’ 2015, 2018, 2019 and 2020 seasons.

Vettel’s 2011 and 2013 seasons were great performances as well… but then again, it only demonstrated how ahead of the curve Red Bull were at qualifying, and how Vettel had mastered the art of winning races purely from pole position. When he started a little behind, he looked nowhere close to the masterclass that Max is on Sundays.

I’ve been watching the sport since 1996, and I’ve never seen a driver more complete than Max this season. He’s fast on Saturdays, a league above every driver on Sundays. Best overtaker on the grid, best driver in all weather conditions and probably the best at race management as well.

If Ferrari and Mercedes don’t make a car at least half a second faster than Red Bull, we’re going to see non-stop years of Max domination.
Todfod