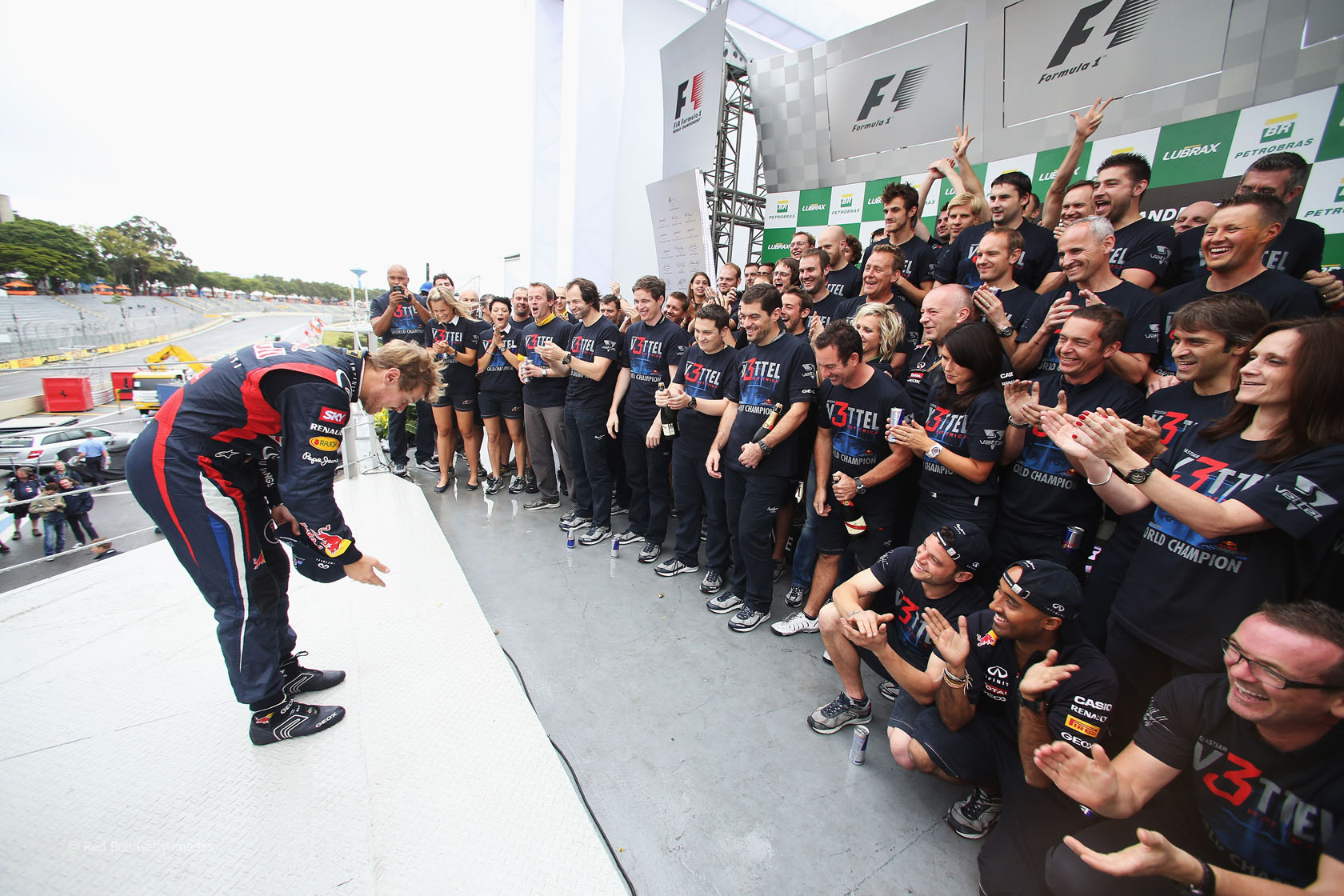 Sebastian Vettel praised his team after winning the drivers’ championship in Brazil and said he was happy they had not been distracted by “dirty tricks” during the year.

“I think the most important throughout the season, I think it was the toughest we had, is that we always kept believing and we remained ourselves,” Vettel told the BBC after the race.

“Obviously, you know I don’t need to teach you, I don’t need to tell you, you were there all the time, a lot of people tried to play dirty tricks and certain things that maybe are, at least from out point of view beyond the limit.

“I was quite lucky nobody hit me” He described his elation at winning the world championship despite suffering a spin on the first lap of the race: “It’s difficult to imagine what goes through my head now, even for myself. I’m still full of adrenaline I think if you would poke me now I wouldn’t really feel that. I think it was an incredible race I think they tried everything, obviously, to make it more difficult for us today.

“Inside the car when you get turned around in turn four for no reason and then imagine you are heading the wrong way going down he M25 it’s not the most comfortable feeling so I had to keep it straight and, yeah, was quite lucky nobody hit me from that point onwards.”

Vettel said he his started was “decent” but he had nowhere to go in the first corner: “Mark [Webber’s] start was a bit poor, it was a bit worse, I was side by side. But then he squeezed me to the wall and I had to back out of it because it’s a very narrow corner turn one. I lost position, all the people on the outside went by.”

“Then for turn four I was a little bit isolated, didn’t really attack the guys in front, wasn’t attacked by the guy behind but then just got the hit on the rear I think from [Bruno] Senna and was spun around.

“But then I pulled the clutch immediately and tried to not stay on the brakes, release the brakes and try to roll downhill so go with the flow of the whole field. Because obviously if you stand there and someone comes around the corner it’s way more difficult to react for you – I mean it sounds a bit stupid, but when you roll down the hill it’s easier for others to avoid you which was most important by then.

“Fortunately the front wing was intact, obviously we damaged the car which we then saw as I said in the dry conditions there was no pace. I was the slowest car in the straight today, I was dog slow it was unbelievable. Really difficult.” Vettel added the wet conditions played into his hands from that point on: “Fortunately then it started to rain again, I felt much, much happier. I think all weekend people tried to, how can I say, push us in a certain direction, when it starts to rain that it will be more difficult for us. But I think we have proven across the season we like rain conditions as much as dry conditions. In that case today it helped us even a little bit.

“Yeah I was obviously very happy when after only ten, twenty laps I was back in fourth or fifth, right behind Fernando [Alonso]. But then as I said in the dry we didn’t have the pace. We did probably bad timing with the pit stop, come in to change another set of dries, and then it started to rain so we had to come in again, that doesn’t help.”

Vettel said that when he was behind Alonso he “knew that will be enough – but equally I knew that there’s a long way to go”.

“Felipe [Massa] went by and then initially he tried to block us a little bit, to let Fernando go probably and give him a cushion,” he added.

“It doesn’t really matter, you know, we weren’t really distracted by that, we just try to do our thing. I think throughout the season we tried to do that, stick to the rules that we know and I think that made the difference in the end.”

Vettel said it was “unreal” to think he’d become the ninth three-times world champion: “I think for all of us in the team, also for myself, it’s unreal. Also to win the third title here, one of my greatest idols Ayrton [Senna], he was from Sao Paulo, he won three titles. I don’t like talking about myself, really, but it’s very difficult to imagine that you join them.

“There’s other names as well. Actually I think my radio wasn’t working, I was crying, but you didn’t hear that, so quite happy for that. Christian came on the radio and mentioned all the three-time world champions. He forgot [Alain] Prost, actually, so I told him that, but I didn’t think he got it.

“I think that one of the nicest part of our sport is you can compare not necessarily only yourself but your time to the guys racing ten, twenty, fifteen, thirty forty years ago. Yeah, I don’t know, maybe tomorrow I know a little bit more but right now I can’t find the right words.”