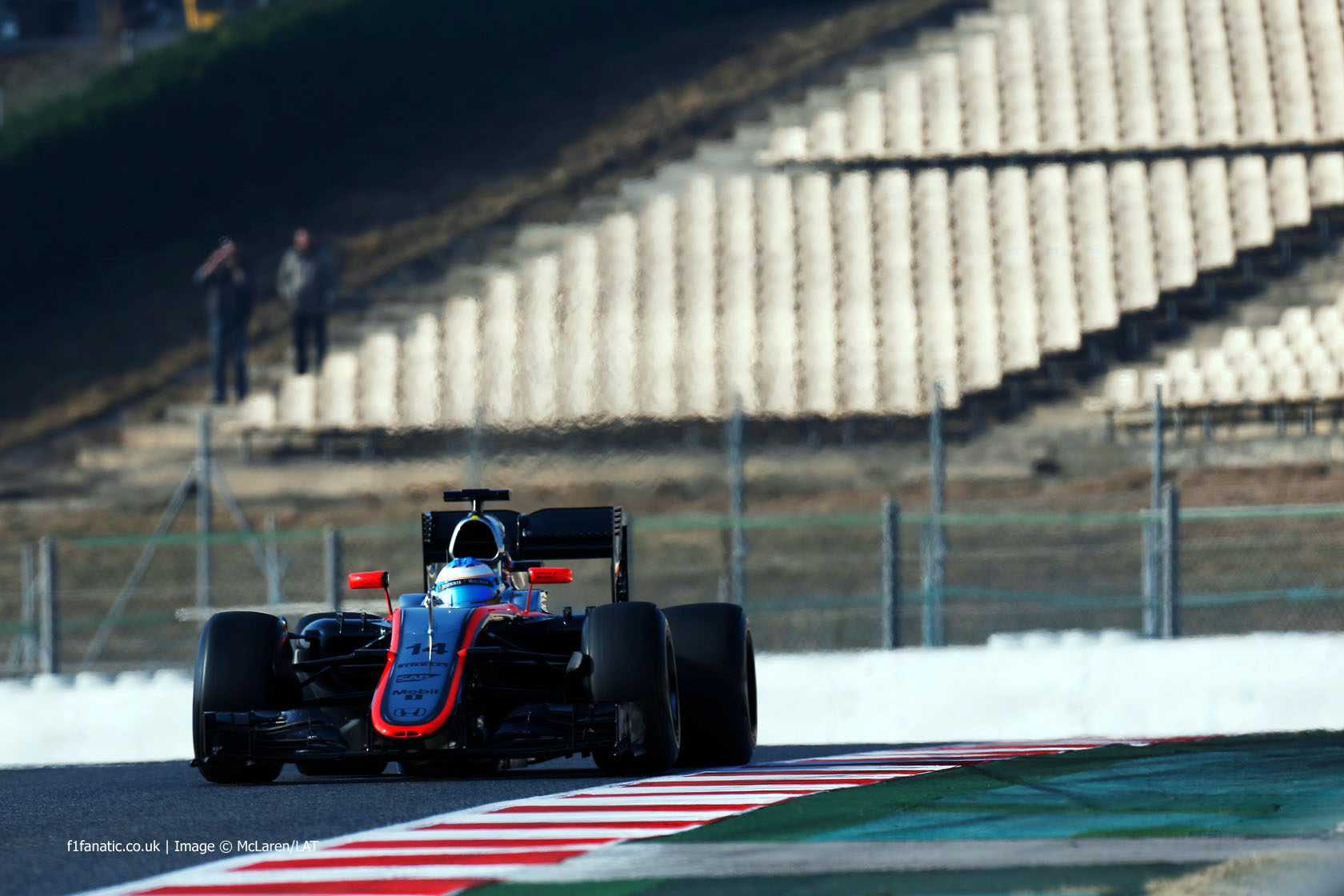 Fernando Alonso says he suspects a problem on his McLaren’s steering caused his crash during testing, rather than a gust of wind.

However Alonso conceded the team had been unable to find data to support that view from the car, which is why they have added more measurement equipment to it this weekend.

Alonso, who will drive the car for the first time since the crash tomorrow, says he does remember the crash at the Circuit de Catalunya on February 22nd.

“I remember the accident and I remember everything that following day,” he said in a press conference in Malaysia. “Obviously with the team we’ve been very close working on that and with the FIA, they were very helpful and we were in close contact all three parties constantly.”

“There is not in the data anything clear that we can spot and we can say ‘it was that, the reason’. But definitely we have a steering problem in the middle of turn three that lock into the right.

“I approached the wall, I brake in the last moment, I downshift from fifth to third and unfortunately on the data we’re still missing some parts. Probably the acquisition data on that particular area of the car is not at the top so there are some new sensors here in this race and there are some changes that we do on the steering rack and on other parts.

“That was the main things so the last week at the factory was more the work on the simulator trying to explain to me all these new sensors and all these new parts we’ve going to this race.”

Alonso said he “remembers everything” about the accident and described the moments leading up to it. “I think [Sebastian] Vettel was in front of me before turn three, he cut the chicane to let me go, basically, in the pit lane”.

Despite the uncertainty over the precise cause of the crash, Alonso said he is not worried about getting back behind the wheel. “As I said before together with the FIA and the team we were constantly doing some checks, investigations on some possibilities and as I said there are some areas in the car that instrumentation-wise probably are not at the level to solve this problem.”

“It’s like a problem that may occur in this race 20 years ago Formula One didn’t have the technology to spot the problem, I am sure we are missing something on the data acquisition that we will spot in ten years times when the technology is available. So that’s one reason and I have zero doubt, zero concerns.”

As a result of the accident the team will reverse some changes which were made to the steering on Alonso’s car to accommodate his driving style, which the team’s other drivers haven’t used. “Some parts on the car that were unique for me that I request because of my driving style when I join McLaren,” he said. “Here we will go back to the normal steering rack and things they’ve been using with Jenson [Button] and Kevin [Magnussen] for the last couple of years.”

However Alonso denied the team’s original explanation that a gust of wind had contributed to the accident. “If you see the video even a hurricane will not move the car at that speed,” he said.

He also refuted the suggestion that he had experienced a medical problem or black-out, causing him to lose control. “If you have any problem or any medical issue normally you will lose the power and you will go straight to the outside, never to the inside. In a Formula One car you still need to apply some effort on the steering wheel, so that’s one thing.”

He said the suggestion that the wind had played a role in the accident was due to the team wishing to satisfy the demand for information about the crash immediately after it happened. “You cannot say nothing for three or fours days until I remember everything because these three or four days will become even worse. So I think they say the theory of the wind, et cetera, but obviously it was not a help.”

Alonso dismissed media reports claiming he had believed the year was 1995 when he regained consciousness:

As over a month has now passed since the accident, Alonso is pessimistic any further information will surface which could shed light onto it. “It’s one of the things that I did in the factory last week, not only the simulator but go with all the engineers and the data available, go through the moments and there are some spots here and there but there is not a clear answer,” he explained.

“I understand completely and support the team, if they don’t find a clear answers if it was this or that it’s impossible to say – or to lie – that it was this or that, they need to go much further. If they will find something any time I don’t know because if after one month we didn’t find anything on the data it’s because maybe whatever part it was the problem, it was not available in the data, so maybe it will never be.”

“I fully trust the team,” he reiterated when asked if he was concerned about the possibility of suffering a similar failure in future.

“They’ve been one month looking every single component of the car, simulating the air force, doing so many tests. They’ve been changing every single part they had some doubts. So I think we have the safest car right now because with all the studies they did. And after one month probably I am the most checked driver medically of history. So we should be fine, both parts.”