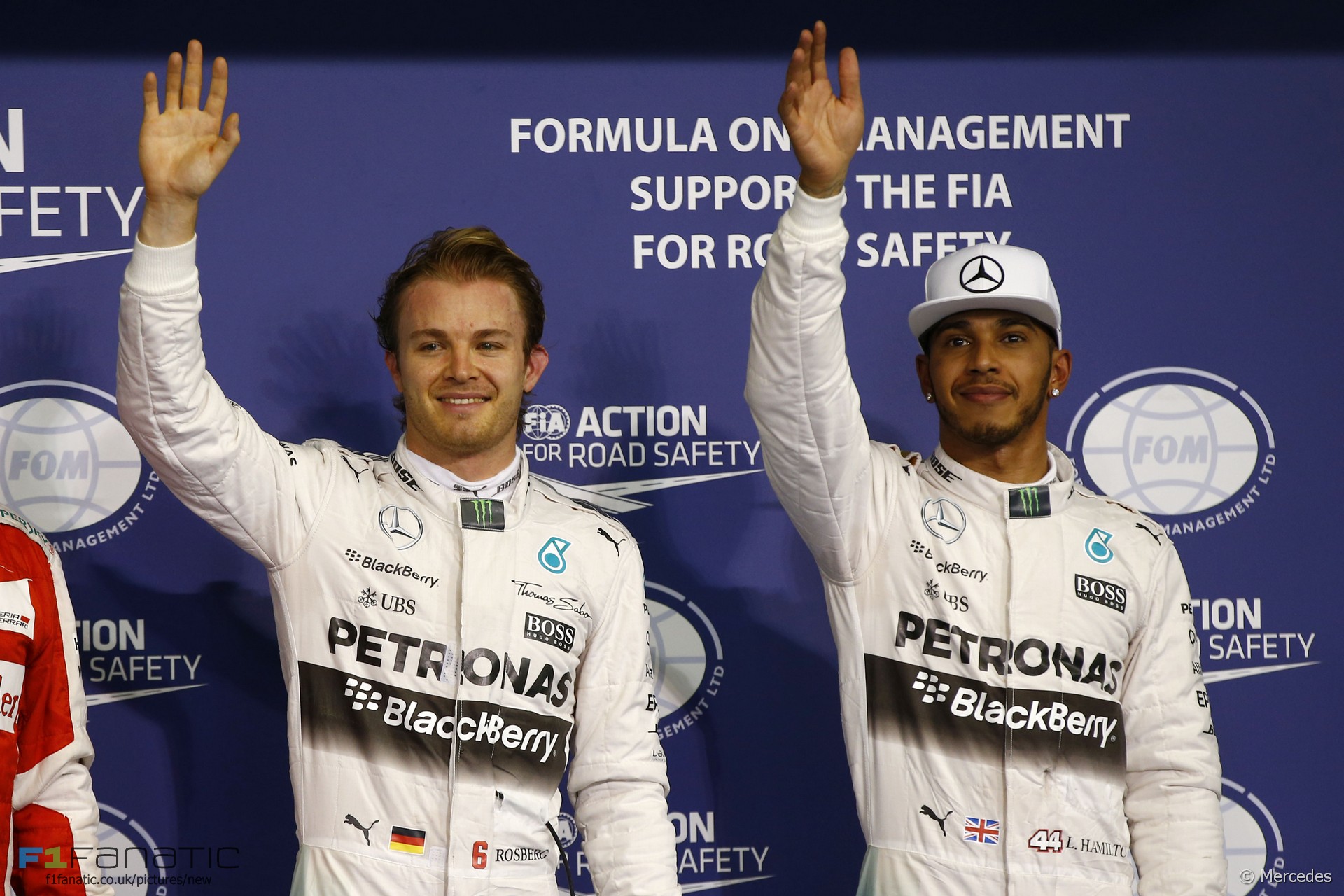 With Nico Rosberg heading a Mercedes front row in Abu Dhabi, are we set for a repeat of the last two races, with the two silver cars running to the flag in reverse championship order?

Unless Lewis Hamilton gets to the first corner first – which he did from the same positions 12 months ago – it’s easy to imagine a similar scenario unfolding. Particularly if, as seems likely, Ferrari aren’t as close to Mercedes in the race as they were in Brazil.

Following the last race many questions were asked about why Mercedes didn’t give their drivers more strategic freedom. Unsurprisingly, Hamilton has not discouraged the view that he finished behind Rosberg because of inflexibility on the Mercedes pit wall rather than because Rosberg was quicker when it mattered.

In Brazil Mercedes were concerned about the threat from Sebastian Vettel’s third-placed Ferrari, without which they might have granted Hamilton more freedom. Will that situation unfold again in the final race?

If Hamilton does find himself running second and lobbying for a change of strategy, his cause will be aided if the third-placed car falls far enough behind for him to make a pit stop and come out ahead. This is most likely to happen if Sergio Perez is able to move up from fourth to third at the start, then delay the following cars as his Force India struggles with its tyres but enjoys the protection of Mercedes grunt on the straights.

Hamilton will surely be aware that while a two-stopper is the conventional approach at Yas Marina, a three-stopper is theoretically quicker if you can get through traffic quickly. However Rosberg will in turn be aware of this, so watch out for him restricting Hamilton’s pace in the opening two stints if he considers it necessary.

With Vettel starting from 16th due to a “huge mistake” by Ferrari, the chances of a tenth Rosberg/Hamilton/Vettel podium are reduced. But recall Vettel started in the pits and finished third at this track three years ago, albeit with some usefully-timed Safety Car periods. Recall also that Vettel started 18th in Canada this year but rose to finish fifth, one place behind his team mate who had started third.

Raikkonen, Perez, Daniel Ricciardo and Valtteri Bottas should make for an absorbing four-way contest for the last podium place, with the added intrigue that Raikkonen is only one point behind Bottas in the championship.

But with overtaking generally difficult at Yas Marina even with its two long straights and DRS zones, much will be riding on the start as always. And those drivers who paid attention to Saturday’s GP3 race will have drawn a useful lesson: pole sitter Esteban Ocon ran very wide at the first corner to keep his advantage at the start, but was given a five-second penalty by the stewards afterwards. For some drivers on the grid, that could turn out to be a penalty worth taking.

Share your views on the Abu Dhabi Grand Prix in the comments.

23 comments on “Will Hamilton have the chance to take the fight to Rosberg?”