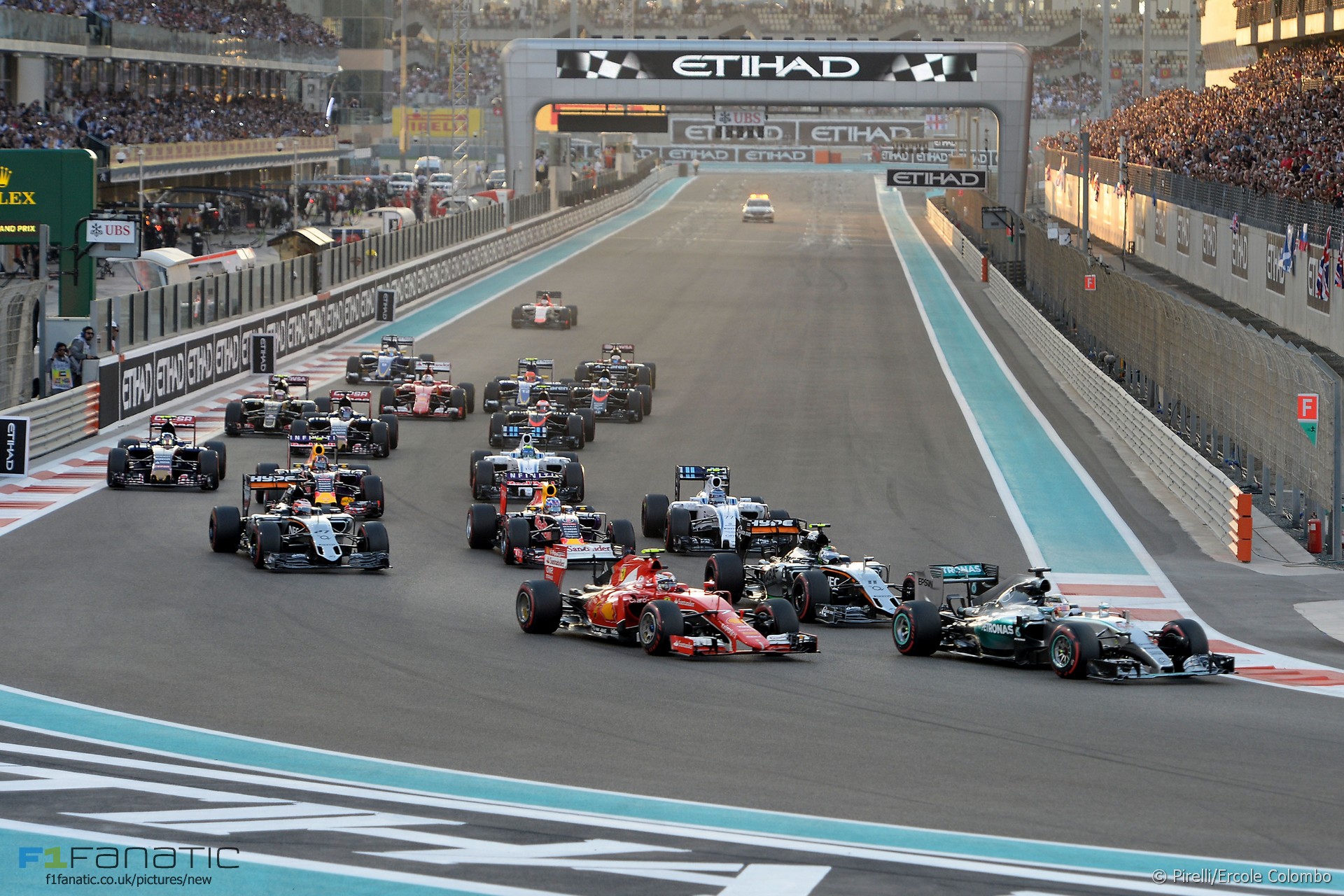 Which F1 driver was the best performer during the Abu Dhabi Grand Prix weekend?

Lewis Hamilton – Made a lot of changes to the car in pursuit of a better set-up, but ended up over a third of a second off his team mate in qualifying. Dropped back quickly at the start on super-softs but was stronger on the harder tyres. But despite extending his middle strategy to shorten his final run, he couldn’t chase down his team mate.

Nico Rosberg – Made it three wins out of three and six pole positions out of six at the end of the season with a commanding performance. Despite running an older engine than his team mate, Rosberg took the win comfortably.

Daniel Ricciardo – Said he would be happy with a top five starting position which he duly delivered. Hulkenberg passed him at the start but Ricciardo reclaimed the place a few laps later with some late braking, but couldn’t do the same to the other Force India. Unsurprisingly he wasn’t able to keep Vettel behind when the Ferrari appeared in his mirrors on super-soft tyres, which meant he finished sixth.

Daniil Kvyat – Was still figuring out his in qualifying after an electrical problem kept him out of final practice, but nonetheless made it into Q3. More problems surfaced in the race leaving him even more short of top-end performance than usual: Massa and Grosjean duly relegated him to tenth.

Felipe Massa – Passed Sainz soon after the start, then spent most of the rest of the race staring at Hulkenberg’s rear wing. Picked off the ailing Kvyat for eighth.

Valtteri Bottas – Made one of his less impressive starts, then his race chances were ruined when he was released from the pits just as Button was arriving, leading to a collision and penalty. He found himself on Button’s tail at the end of the race and surprisingly couldn’t make it past.

Sebastian Vettel – Failed to make it into Q2 when his team incorrectly assumed his position was safe. But having started 15th he made his way up to fourth with little drama: he ran long on soft tyres while most others used the super-softs, used the softer tyres to easily pass Ricciardo and Perez and coped with the heavy graining which followed. He also made way for Raikkonen when he needed to.

Kimi Raikkonen – Had a clean and straightforward weekend. Quicker than Vettel in Q1, he secured third on the grid and had a fairly lonely run to third in the race as well, delayed only by a brief problem at his final pit stop.

Fernando Alonso – Ninth in second practice may have raised expectations too far – they came crashing down on Saturday when he dropped out of qualifying in 17th place with a puncture. Alonso was very unhappy with the penalty he received for his lap one collision with Maldonado, triggered by an incident with Nasr, but the replays appeared to support the stewards’ view that Alonso caused the contact with Nasr in the first place. A late switch to super-softs brought some cheer – and the third-fastest lap time.

Jenson Button – Started 12th and finished one place lower, but managed to repel the Williams of Bottas for five laps at the end. That left him considerably more upbeat about the team’s prospects heading into the winter than his team mate was.

Nico Hulkenberg – Said he was pleased with his qualifying lap but disappointed to discover it was only good enough for seventh place. Started well, holding fifth initially, but couldn’t make the tyres last as well as Perez and was bumped back down to seventh by Ricciardo.

Sergio Perez – After his Brazil blip Perez was back at the strong level of performance which has characterised much of his second half of the year. He was third after the initial runs in Q3, but slipped to fourth when Raikkonen bettered his time. With Vettel making up for lost time in the race, fifth was likely the best result available.

Max Verstappen – Lost tyre temperature in traffic before his final run in Q2 so his last lap wasn’t quite up to scratch and he missed the cut. A heavy lock-up at turn eight forced an extra pit stop which damaged his chances of finishing in the points. He then picked up a justifiable five-second penalty for gaining a position on Button by going off the track, and a rather harsh drive-through for not responding quickly enough to blue flags when being lapped by Hamilton.

Carlos Sainz Jnr – After yet another breakdown in second practice Sainz got into Q3 and started the race well, passing the Williams drivers around the outside. That put the Toro Rosso rather higher than it was capable of running and he slipped back behind Massa before coming under pressure from his team mate. Both had to let each other past at different points but it was Sainz who came out ahead, though he lost the final points place to Grosjean.

Romain Grosjean – A gearbox problem in qualifying meant no Q3 appearance in his last race for Lotus – and a five-place penalty. He therefore ran the same strategy as Vettel, starting on softs and switching to super-softs at the end. He was able to re-pass Sainz and Kvyat but not Massa’s similarly-engined Williams.

Pastor Maldonado – Qualified 13th but was taken out by Alonso at the first corner.

Marcus Ericsson – Slipped up in qualifying and failed to make it out of Q1. Ran the opposite strategy to his team mate and therefore briefly ran as his as seventh on softs early in the race. Using super-softs at the end he was able to pass Nasr and finish ahead.

Felipe Nasr – Picked up front wing damage in the contact with Alonso which forced an early pit stop and left him on the back foot strategically.

Will Stevens – A solid final weekend in which he out-qualified and finished ahead of Merhi.

Roberto Merhi – Back in the Manor after a three-race absence, Merhi flat-spotted one set of tyres in Q1 and was delayed by traffic on the other. Overnight suspension changes to his car meant a pit lane start, but in the race he continued to struggle with his brakes and finished well behind the other car.

Who was the best driver of the 2015 Abu Dhabi Grand Prix weekend?