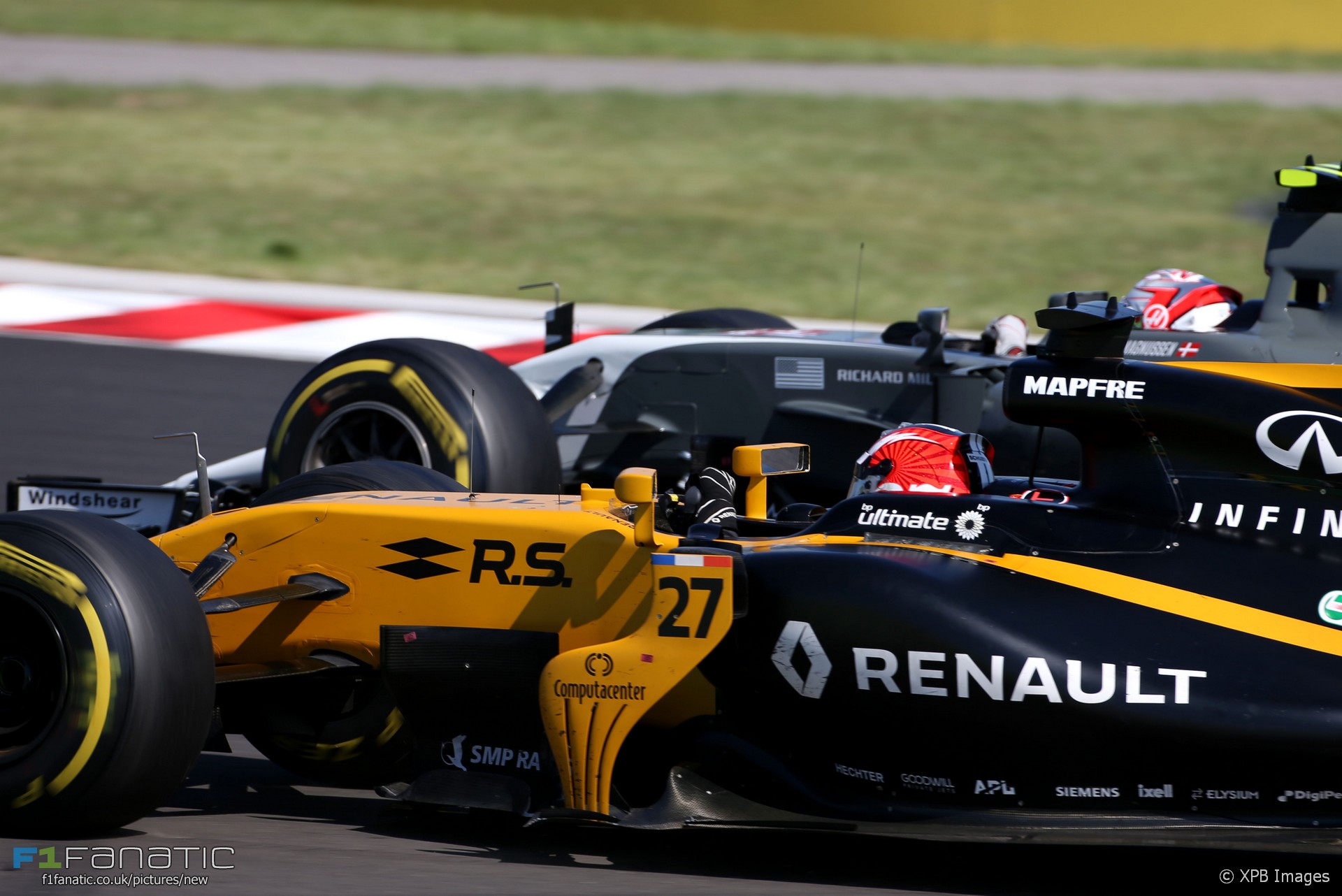 Nico Hulkenberg and Kevin Magnussen were not impressed with each other during the Hungarian Grand Prix. Here’s what they and the others had to say on the radios.

Lewis Hamilton was concerned how well his tyres would hold up in the hot conditions. His radio later malfunctioned repeatedly during the race.

Hamilton: “The rear tyres are going to die.”

“Checo did you have any contact on the first lap?”
Perez: “No. Just a little touch from Esteban.”

The Red Bull drivers tangled at the start, as did Nico Hulkenberg and Romain Grosjean.

Magnussen: “I mean if you can do what Hulkenberg did to Romain then it’s going to be a dirty race.”

To Hamilton: “Verstappen has ten seconds added to his pit stop.”

Ricciardo: “Was that who I think it was?”
“Yeah.”
Ricciardo: “[Censored by FOM] sore loser.”

The stewards investigated Carlos Sainz Jnr for an incident involved Fernando Alonso at the restart but later cleared the Toro Rosso driver.

Alonso: “OK but there should not be too much to discuss, you cannot drive against other cars, simple.”

“Lewis, radio check.”
Hamilton: “Loud and clear. Good to have you back.”

Hulkenberg: “Think I’m going to take a little breather from that group.”

To Hulkenberg: “Jo has been asked to let you past. Jo is slower than you.”

Romain Grosjean had to make his first pit stop early as he was losing air pressure in a tyre.

“OK Romain stop the car, just bring the car in slowly, we believe we have a crossed wheel nut so just go slow, we’ll come back to you. Do you feel anything loose?”
Grosjean: “Yes.”
“OK we need to stop the car.”

To Bottas: “Currently on lap 23 we’re target plus five at the moment cut we’d like to close the gap to cars ahead.”

From an early stage in the race Sebastian Vettel was troubled by a problem with his steering.

Vettel: “Check the steering, hanging to the left.”
“Is it getting worse?”
Vettel: “I thought it’s getting worse.”

Vettel: “Fronts are not in a healthy shape.”
“Understood, will be soon.”

Kimi Raikkonen was unimpressed with how quickly Paul di Resta responded to blue flags on his return – and with Ferrari’s decision to pit him immediately after the struggling Vettel.

Raikkonen: “I mean if he cannot see behind then he stay on the reporting stuff.”

Raikkonen: “I had the speed to stay out.”

Alonso solved his Sainz problem the old-fashioned way – by overtaking him.

To Alonso: “What a fantastic move Fernando. Just be careful, Sainz still very close behind. Palmer behind is on 37-lap-old options.”

To Bottas: “We believe Vettel has an issue so you can close the gap.”
To Vettel: “Try to avoid heavy kerbing.”

The pressure grew on Ferrari as Vettel continued to hold Raikkonen up.

Raikkonen: “He is going full speed? Because obviously Mercedes is catching. I have nothing I can do.”
“Understood Kimi. He has handling issues, Kimi, he is struggling with his handling.”

To Bottas: “Ferrari cannot use kerbs.”

Mercedes arranged a position swap between their drivers.

Hamilton: “If I can’t catch them and get past I have to let him back past.”
“OK Lewis so we don’t know what fixed the radio. Just keep talking to us.”
“OK Lewis Valtteri is going to let you past into turn one. Go strat mode three. Ferraris just up ahead.”

To Bottas: “Lewis will let you go by if he can’t get past Raikkonen.”

Raikkonen: “I don’t know, I’m not in the most comfortable position, still I am, but soon.”
“Understood, Vettel has been told to push, stay with him.”

To Bottas: “Make sure you stay close to Lewis so we can re-invert the cars.”

“OK Lewis we’re going to have five laps to try and make something of this.”
Hamilton: “No pressure, then.”

Magnussen was unhappy with his penalty for forcing Hulkenberg off the track and Hulkenberg didn’t think much of his rival’s driving either.

Hulkenberg: “This guy is just dangerous.”

To Di Resta: “OK Paul we’ve got a problem with the car, we’ll have to retire.