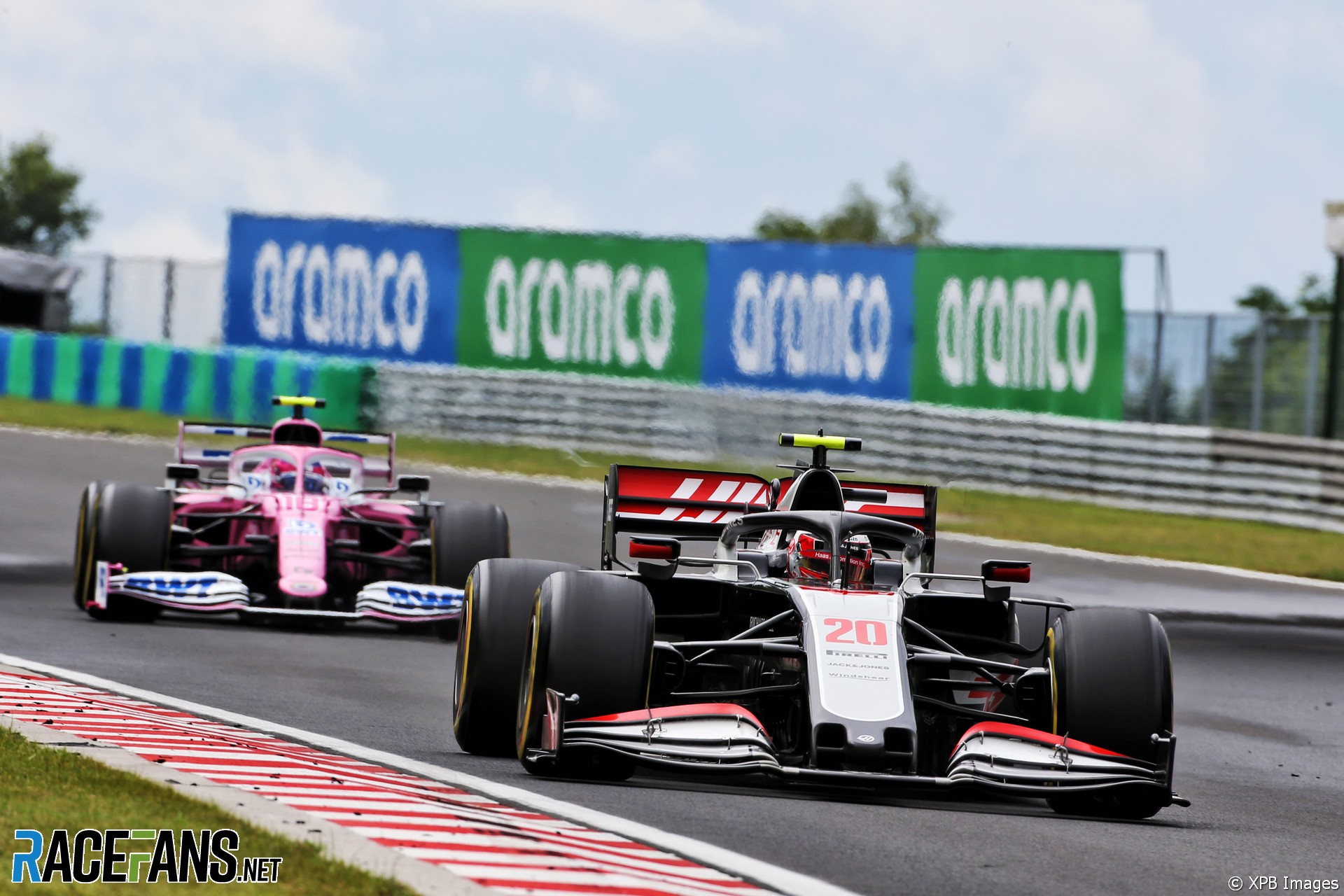 Kevin Magnussen and Lance Stroll were RaceFans’ Star Performers of the Hungarian Grand Prix. Here’s why.

Magnussen qualified 16th, three tenths of a second ahead of Grosjean, but started from the pit lane after he opted to pit for slick tyres to start the race. That call to pit later earned him a 10-second penalty but after everyone else stopped for slicks Magnussen shot up to third.

The Haas driver wisely didn’t fight the front-runners too hard as they regained their places at the front of the field, minimising the inevitable time loss as possible. He slowly dropped down the order and crossed the line ninth, holding off Carlos Sainz.

The penalty dropped him to 10th but he nonetheless collected the first points of the season for himself and Haas.

With rumours linking Sebastian Vettel to his team mate’s seat, Lance Stroll chose a good weekend to make a case for himself deserving a place at his father’s team on merit alone. He began by out-qualifying Sergio Perez for third on the grid.

While Perez bogged down, Stroll made a good start and briefly ran second behind Lewis Hamilton. He fell to fifth after everyone had stopped for slicks.

He quickly overtook Romain Grosjean and, with a little more difficulty, eventually passed Magnussen on lap 15. Bottas caught Stroll on lap 35 and got ahead via an earlier pit stop – an exchange of positions which was surely inevitable, though Stroll remained convinced a podium finish was possible. Stroll cruised to the end of the race in fourth – Racing Point’s best finish of the year so far – with Albon too far behind to challenge him for the position.

Bottas couldn’t manage Hamilton for pace all weekend and qualified a tenth off pole. An error at the start spoiled his day: Distracted by his steering wheel, Bottas began moving fractionally before the lights changed. He was fortunate to avoid a penalty, but slipped down the order and was left playing catch up for the rest of the race.

He made the passes he needed to early on and rose to third place. Could he have taken second away from Verstappen? An extra pit stop allowed him to come back at the Red Bull driver. He caught Verstappen on the final lap but was not close enough to attempt a pass. This was a day when only Bottas had the chance to rival Hamilton and he didn’t rise to the occasion.

Renault sent both drivers out on medium tyres during Q2, then switched to softs for the second run. Ocon qualified a tenth behind Ricciardo but in the midfield, the small margin of error correlated to three positions on the grid.

He dropped two more positions on lap one, but had a good second lap. Delaying his switch to slick tyres did not pay off, however, and he was consigned to a frustrating afternoon in the midfield. Adding insult to injury, Lando Norris passed him on the final lap, leaving him back where he started in 14th.

Rating Hamilton anything less than a ‘star’ for such an impeccable performance seems harsh, but on the other hand he was never seriously tested. He and Mercedes seemed in perfect harmony all weekend as he led every lap but one and set the fastest lap as well.

Verstappen was left frustrated after qualifying seventh and his race appeared to be over before it had started when he slid into the barriers on his way to the grid. Remarkably, his mechanics were able to repair the suspension damage before the race and Verstappen rewarded them with a faultless performance. He moved up four positions on the opening lap, stayed out longer than Stroll to get ahead and built enough of a lead to prevent Bottas from catching him before the chequered flag.

His team mate Alexander Albon had an even worse qualifying performance as he had to do both his Q2 out-laps in traffic which ruined his tyre warm-up. He started 13th but emerged ninth after the switch from intermediates to slicks. He continued to show his racecraft skill in recovering to fifth place.

Having led Stroll earlier in the weekend and in the opening phases of qualifying, Perez blamed dizziness for his failure to beat his team mate to third place. He suffered an enormous amount of wheelspin as the lights went out and dropped back to seventh. After switching to slick tyres he nearly ended his race in a barrier. He lost a place to Albon and came in seventh.

Both Ferrari drivers made it into Q3 and locked out the third row of the grid. Good starts put Vettel fourth and Leclerc fifth by the end of lap one. Vettel pitted after Leclerc but a slow stop due to traffic in the pit lane handed the younger driver the advantage. Ferrari wanted to give both drivers the soft tyres but Vettel insisted on mediums which turned out to be a wise move.

Leclerc offered little resistance when Vettel moved to pass and the latter went on to finish in sixth after a couple of errors allowed Albon through. Meanwhile, Leclerc’s second stint on soft tyres ruined his race and he finished out of the points in 11th.

Ricciardo started 11th and stayed out one lap longer than the majority of the field on intermediates giving him fresher tyres for the second stint. He passed Magnussen on lap 45 to secure eighth.

Norris out-qualified Sainz for the second time this season but a poor start dropped the quicker qualifier back to 13th at the end of lap one. He lost more ground in the pits and was 18th at one stage, from where he was unable to get back into the points. Sainz gained two positions at the start and passed Leclerc for 10th on lap 59. He couldn’t pass Magnussen on track but the Haas driver’s post-race penalty elevated Sainz to ninth.

In a weekend beset by technical problems, Pierre Gasly made it to Q3 but a powertrain failure prevented him setting any further times. Starting 10th he was poised for points but a gearbox problem prematurely ended his race in a cloud of smoke. Daniil Kvyat started 17th, switched to slicks on lap one, yet was disappointed to end up out of the points in 12th.

The Alfa Romeo drivers were the two slowest cars in qualifying but they showed quicker race pace than Williams and were able to pass both drivers in the race. Kimi Raikkonen received a penalty for not lining up properly in his grid box and was given a five-second penalty. Regardless, he finished two places ahead of Giovinazzi in 15th.

George Russell and Nicolas Latifi both made it to Q2 but Latifi made a much better start. His race was ruined when the team sent him out of the pit box into the side of Sainz, causing a puncture, floor damage and five-second time penalty. He spun again on lap 42. Russell laboured in traffic all day, which he says the Williams is particularly sensitive to.