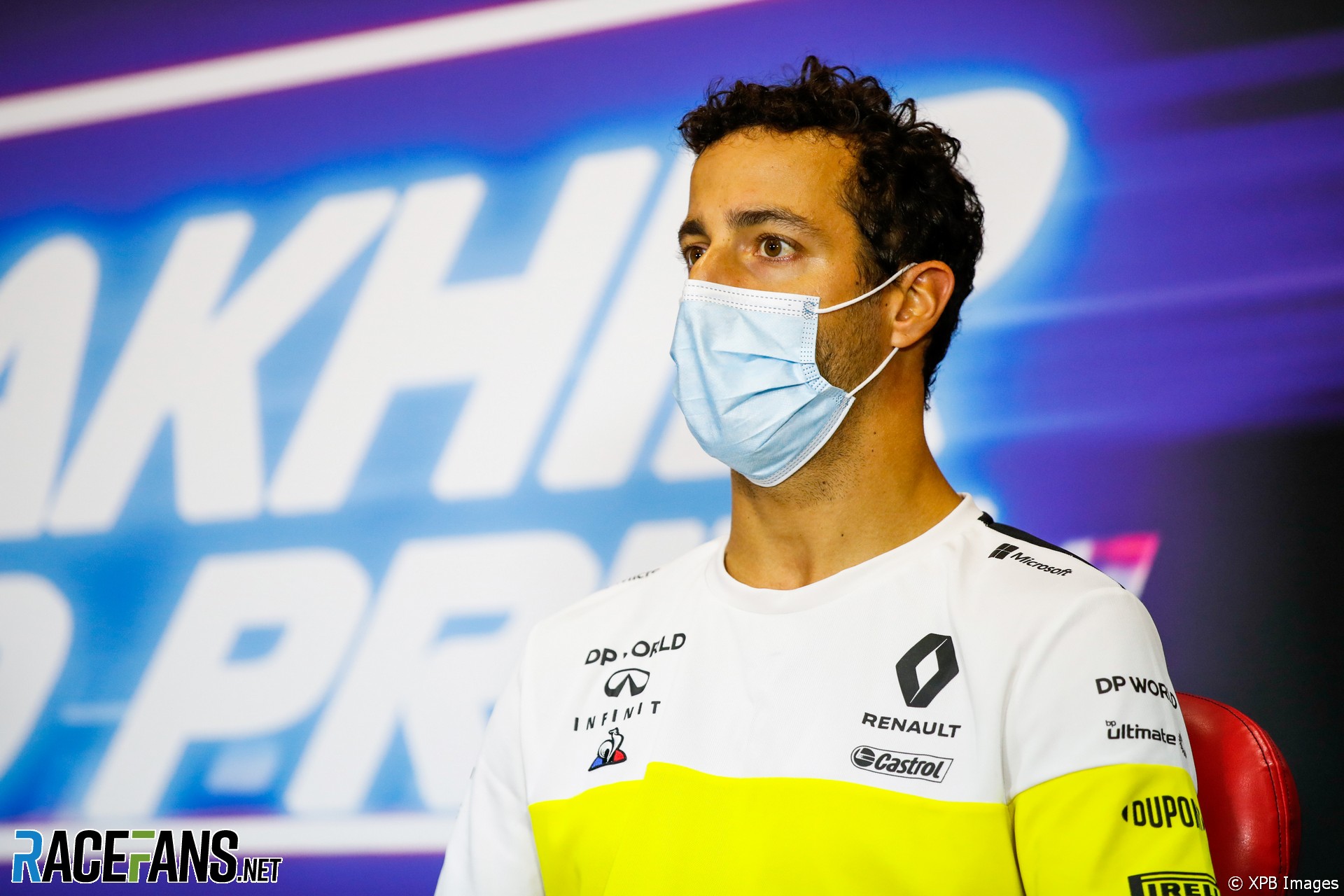 Both drivers reiterated their criticism of the repeated replays shown of the crash on Formula 1’s world broadcast feed while Sunday’s race was suspended.

After the crash occured on the first lap of the race, no replays of the footage were shown until it was known Grosjean had emerged largely unscathed. However Vettel said the amount of footage shown was excessive and not respectful to drivers.

“It probably showed on Sunday that we are sitting at two different sides of the table,” said Vettel in response to a question from RaceFans. “We are the ones driving the cars and we are exposed to the risk and the limits and so on and everyone who is watching, including you, including people on the screen and so on, sometimes criticise the fact that it’s not dangerous enough, not exciting enough and so on.

“But I think a certain risk will always be there, as much as we can take it away. It’s good to see that there’s a continuous effort being made and these chances that we get with accidents taken seriously to try and improve.

“It’s a reminder of the fact, hopefully, for the other side, that it’s not just objects being in the car. We are human beings and we put our lives on the line. That’s something we are happy to do because we have a great passion for what we do.

“But still sometimes, here and there, I wish there would be a bit more respect. Showing the incidents over and over, I think was probably not the way of doing that.”

Vettel said the fact no replays were shown until Grosjean’s condition was known “doesn’t change the fact there are kids watching and so on.”

“I think it wasn’t a nice thing to watch in general, if you imagine that actually there’s a soul in that car who’s trying and fighting to get out,” he added.

Ricciardo said his stance on the replays “hasn’t changed” since the race. “I felt like once they showed it once, and then we’d obviously seen him jump out and get into the Medical [Car], I felt like that was all we really needed to see.”

Further replays “could have waited… until tomorrow but even until after the race” he added. “We obviously still had a race to do.”

The footage was “inconsiderate to his family” and also “a distraction” for those at the track, said Ricciardo, “because every time we’d go into the garage and try and find out what was happening, the only thing that was on, it seemed like, was endless replays.

“Trying to get the engineer’s attention or the mechanics, everyone was a little bit spaced out or rattled from it all, which is completely understandable. So I stand by it.”

Ricciardo said Grosjean’s wife Marion told him “she appreciated my comments” after he criticised the coverage. “I think that’s all the validation I needed.”

The Renault driver said the footage of Grosjean’s crash was “abused” by Formula 1, and suggested they had taken for granted that he would have no medical complications as a result of his high-speed impact with a barrier.

“It was 54G or something, the impact, and from my understanding – don’t get me wrong, I’m no doctor – but there could be further complications maybe later that evening that we don’t know about internally.

“So it just felt like it was a bit abused, I think that was it. It was obviously showed, I didn’t feel it needed to be showed as many times as it did, or at least in that moment.”

Formula 1 extended an offer to Ricciardo to discuss his views about the coverage, which he said he will take up today.

“After the race I was still not only a bit heated, but then had to dissect my own race and I didn’t feel it was the right time. So I will hear them out today and obviously hear the reasons and go from there. I’m happy to hear, I’m happy to be educated.”

“I guess everyone will have their own view,” he added. “For me, I was never really into crashes. Like [when] you get sent clips like ‘did you see the crash at the Indy 500?’ or something. It was never really appealing to me.

“Obviously some people love it. Some people love the debris everywhere and that. I feel like I’m not 10 years old anymore, you kind of grow out of that.”