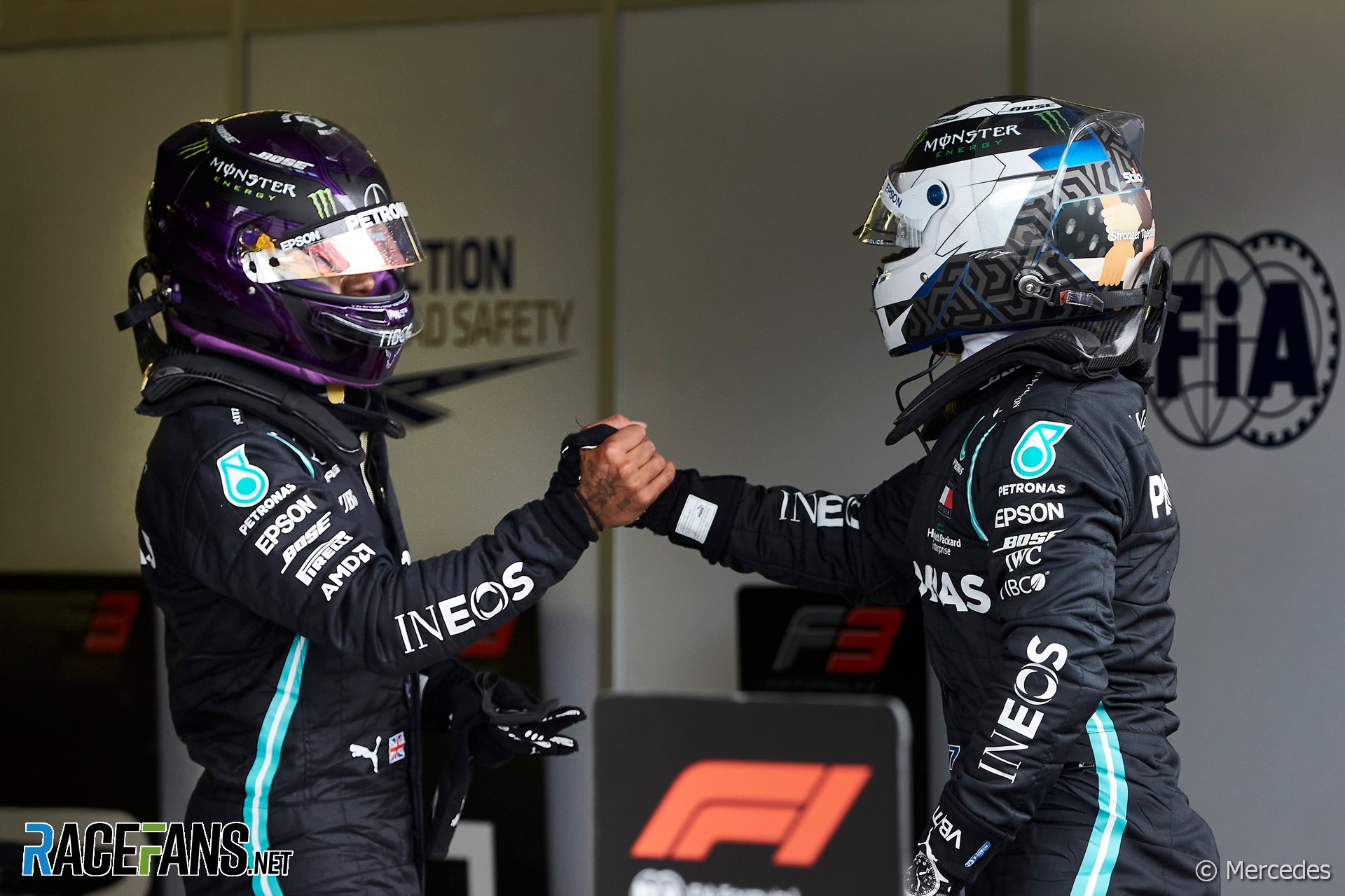 The contests between team mates are one of the most absorbing aspects of Formula 1 as they give us a rare opportunity to compare drivers in the same, or at least very similar, machinery.

Following upheaval on the driver market for the 2021 F1 season, only Mercedes and Alfa Romeo have kept the same driver pairings for the upcoming.

Who will come out on top at each team this year – and how accurately did RaceFans readers assess the 2020 line-ups 12 months ago? Read on to find out.

It’s the fifth year for the longest-running partnership on the Formula 1 grid today. Hamilton has out-scored Bottas in every season so far but, as his previous team mate Nico Rosberg demonstrated, he can be beaten.

While Bottas occasionally managed to put one over Hamilton in qualifying last year, rare were the days when he looked a consistent threat for his team mate over a race distance. And when George Russell stepped up in place of Hamilton for the penultimate round of the championship, Bottas didn’t exactly cover himself in glory.

Unless Red Bull or another team produces a championship-contending car, Bottas may be the greatest obstacle Hamilton faces to winning a record-breaking eighth world title this year. But while Hamilton’s future is in his own hands, Bottas is driving to secure his future at F1’s top team.

Which Mercedes driver will finish ahead in this year's championship?

In Sergio Perez, Red Bull are making their third attempt in as many seasons at finding a capable team mate for Max Verstappen, since Daniel Ricciardo walked out in 2018.

Will Perez fare any better against one of F1’s top drivers than Pierre Gasly or Alexander Albon did? Nearing his 200th grand prix start, he certainly has far greater reserves of experience to draw on than his predecessors.

Last year: Verstappen was the overwhelming favourite to come out ahead, chosen by 95% of you, and so it proved.

Which Red Bull driver will finish ahead in this year's championship?

Ricciardo is widely regarded as one of the grid’s most likeable drivers, but on the track he’s an iron fist in a velvet glove, both a first-rate qualifier and a daring wheel-to-wheel racer. He will provide a challenging new benchmark for Norris, who measured up well against Carlos Sainz Jnr in his first two seasons.

Last year: Just over two-thirds of you picked Sainz to beat Norris, and he did, though his younger team mate led the way in the championship for much of the year.

Which McLaren driver will finish ahead in this year's championship?

The former Racing Point team has a pair of drivers who were comprehensively beaten by their team mates last year. New arrival Sebastian Vettel brings over a decade of Formula 1 know-how and the rebranded team expect his arrival will help raise them to the next level.

Last year: By an overwhelming majority of 98%, RaceFans readers backed Perez to come out on top. He did – but lost his seat anyway.

Which Aston Martin driver will finish ahead in this year's championship?

Alpine’s two drivers have both departed F1 at the end of 2018. Ocon returned last year, while twice-champion Alonso spent two seasons away.

It took until the final races of last year for Ocon to start looking like the driver he was when he left. Don’t expect Alonso, who tested frequently for Renault at the end of last year, to take as long to get back up to speed, notwithstanding a recent cycling accident which left him with a fractured jaw.

Which Alpine driver will finish ahead in this year's championship?

Which Ferrari driver will finish ahead in this year's championship?

Yuki Tsunoda is the only rookie driver on the grid who will have to go up against an experienced racer. Aside from a tough half-season at Red Bull at the beginning of 2019, Gasly has fared well in F1, and even scored a shock win at Monza last year. Tsunoda knows how good Gasly is from watching him racing in Japan four years ago.

Last year: Daniil Kvyat was shown the door after being comprehensively out-scored by Gasly, who was picked to come out on top by 79% of our readers

Which AlphaTauri driver will finish ahead in this year's championship?

This is the only team besides Mercedes with an unchanged line-up for the new season. Giovinazzi has steadily improved since making his full-time F1 debut in 2019. But he’s up against the most experienced driver in the sport’s history, and while Giovinazzi gave Raikkonen an increasingly hard time in qualifying last year, the 2007 world champion tended to end up ahead on race day.

Last year: While Raikkonen was the overwhelming favourite among our readers, 80% of which chose him to come out on top, he ended the season tied with Giovinazzi on four points each, albeit classified ahead on count-back of ninth-place finishes.

Which Alfa Romeo driver will finish ahead in this year's championship?

Haas is the first team to begin a season with an all-rookie line-up since Manor fielded Pascal Wehrlein and Rio Haryanto five years back.

On paper, Mick Schumacher is surely the pick of the pair, considering his Formula 2 and Formula 3 titles, plus Ferrari testing experience. But Mazepin has had the use of a Mercedes F1 car to hone his abilities in an undisclosed number of private outings, and may be better-placed to make the transition from F2 to F1.

Last year: Top 10 finishes were hard to come by at Haas. While 80% of you tipped Kevin Magnussen to be the team’s top scorer, he collected just one point to Grosjean’s two

Which Haas driver will finish ahead in this year's championship?

Following his star turn as Hamilton’s substitute at the Sakhir Grand Prix, big things are expected of Russell once he gets a competitive car underneath him. Latifi had a solid but unspectacular first season in F1. But both need Williams to continue the progress they made last year for points to be a regular possibility.

Last year: Russell scored his only points in a Mercedes; based on their results at Williams, Latifi would have come out on top by dint of his greater number of 11th place finishes, an outcome just 3% of readers predicted.

Which Williams driver will finish ahead in this year's championship?