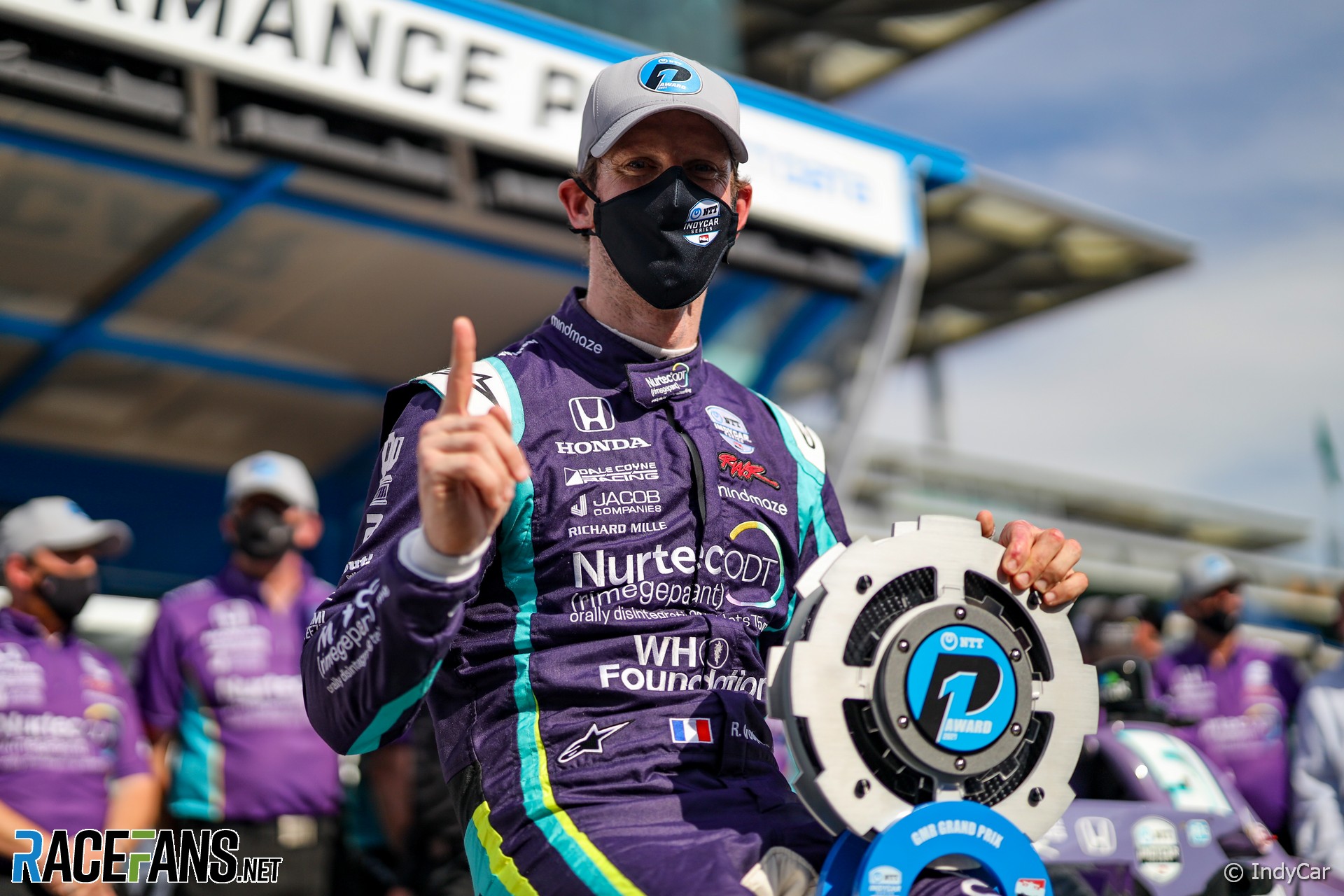 In the round-up: Romain Grosjean will start today’s IndyCar round on the Indianapolis Motor Speedway grand prix course from pole position.

Grosjean saw off two-times IndyCar champion Josef Newgarden and the rest of the enlarged, 25-strong IndyCar field to take his first pole position at the third time of asking. The Coyne/Rick Ware driver, who qualified seventh and 18th for his first two starts in the championship last month, headed the field with a lap of 1’09.4396.

He admitted some nervousness about leading the field around for a rolling start for the first time in his career, 10 years since he began his GP2 title-winning campaign with pole position at Istanbul Park.

Jack Harvey and round one winner Alex Palou will share the second row of the grid, followed by Grosjean’s fellow rookie Scott McLaughlin and Conor Daly. An incensed Will Power remonstrated with his race engineer on the pit wall after missing the cut for the Fast Six, and will start 12th. Reigning champion Scott Dixon fared no better in 16th.

Juan Pablo Montoya, returning to the series for the first time in four years, will bring up the rear of the field in McLaren SP’s third car. His two fastest lap times were deleted after he was ruled to have blocked Palou.

Colton Herta has extended his deal to drive for Andretti until at least the end of 2023. He will retain backing from Gainbridge.

“Colton has already shown so much potential in the short time he’s been in the series and having a great partner like Gainbridge recognise and support that potential is great for everyone,” said Michael Andretti. “If the start to the 2021 season is any indication of the future success for the 26 car’s program, I think we have a lot to look forward to over the next few years.”

Herta lies seventh in the championship after winning at St Petersburg but retiring from the first and third rounds. He will start today’s race from eighth on the grid.

IndyCar should have had 26 cars on the grid this weekend, but Carlin driver Max Chilton is not present after being unable to travel to the USA in time for the race. The team expects to participate in the Indianapolis 500 later this month.

"Following today’s announcement by organisers of the Indy Toronto and IndyCar that the July 9th-11th event on the streets of Toronto has been cancelled due to ongoing Covid-19 restrictions in Ontario, Andersen Promotions has revised its 2021 calendar. The Mid-Ohio Sports Car Course will now host the season finale for the Road to Indy on October 1st-3rd."

‘I saw death coming’: Grosjean pushes on in IndyCar after F1 wreck (The Guardian)

"In IndyCar, it’s much more healthy. You actually fight 23 other drivers, whereas in Formula 1 because only your teammate has the same car as you most of the time you only fight that guy."

"The best thing Formula Ford’s for is just kind of getting you out of a go-kart and getting you into a single seater. As far as the downforce and all the other kind of techniques that you learn to drive, like a formula car with, I’m not sure how relevant it is to kind of chase the Piastri path and the F3, F2."

Did F1 really need to replace its lost race in Turkey?

Typical quantity over quality Liberty Media. Heaven forbid they have one less race in a season.

It was a good compromise under Covid restrictions last season but nobody wants a double-header at the same circuit.
Roth Man (@Rdotquestionmark)