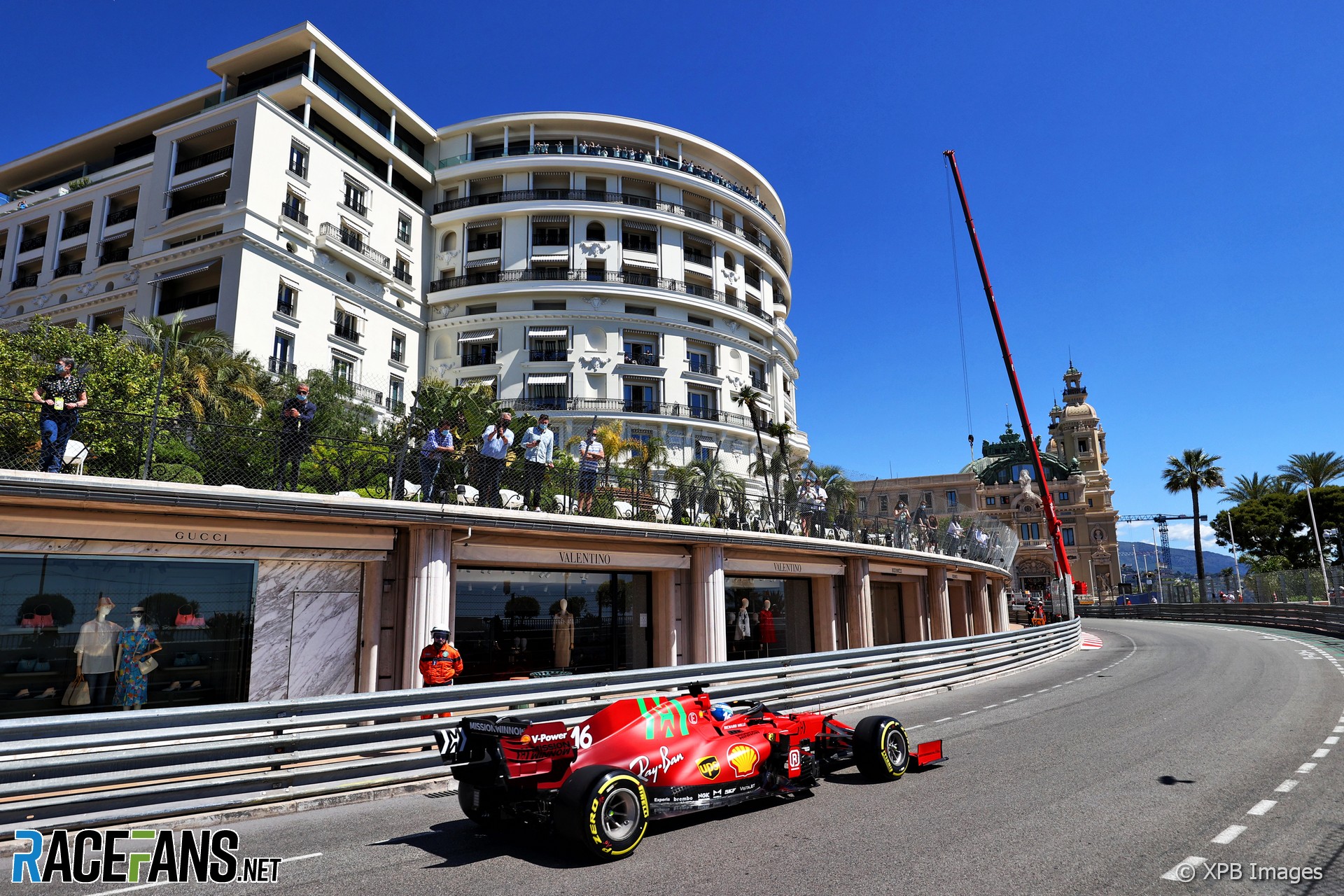 Charles Leclerc was quickest in the second practice session for the Monaco Grand Prix, which came to an early end after Mick Schumacher crashed.

Ferrari had looked strong this morning, despite Leclerc completing just four laps due to gearbox trouble, with Carlos Sainz Jnr splitting the Red Bulls at the top of the times. They continued that run in the afternoon, with Sainz consistently at the top of the times and both their cars the only ones to dip below 1’12.

Mercedes, who had not gone on soft tyre runs this morning, seemed more competitive in the afternoon session. Hamilton was the closest to Ferrari’s times, albeit nearly four-tenths back from Leclerc’s best. Bottas was less than a tenth away from him to be fifth fastest, in what was quite a close top 10.

Verstappen, who also encountered gearbox trouble at the end of the morning’s running, was just seven-thousandths off Hamilton’s time, in fourth.

Lando Norris finished the session sixth-fastest, the McLaren cars having been very close during first practice. This afternoon, however, he was well ahead of Daniel Ricciardo who struggled in 15th, debriefing with his engineers mid-session about where to find more time compared to Norris.

Perez, who bested Verstappen in first practice, seemed to encounter the worst of the traffic this afternoon. He nearly collided with Schumacher at one point early on in the session and was only able to set a 1’12.708 for ninth-fastest. Pierre Gasly, who also had a strong morning session, putting his AlphaTauri two-tenths ahead in eighth place, on a soft tyre run.

Sebastian Vettel at one point complained that it felt like his eyes were bleeding, due to something in his eye. Despite that, he was 10th fastest and beat team mate Stroll by two tenths.

Monaco newcomer Yuki Tsunoda was the only driver other than Schumacher to suffer a major incident. He knocked the rear of his AlphaTauri after just 11 laps, ending his running for the session.

Schumacher’s incident, in the final ten minutes of the session, brought the red flags out and crucially scuppered his rivals’ hopes of doing any practice starts. He lost control of his Haas on the way into Massenet, thumping the barrier leaving him with a right-rear puncture and, according to his radio message, broken the rear suspension.

He attempted to drive his Haas back to the pits at first, then pulled to a stop in the escape road at the Nouvelle chicane. The session was red-flagged with less than four minutes remaining and was not restarted.