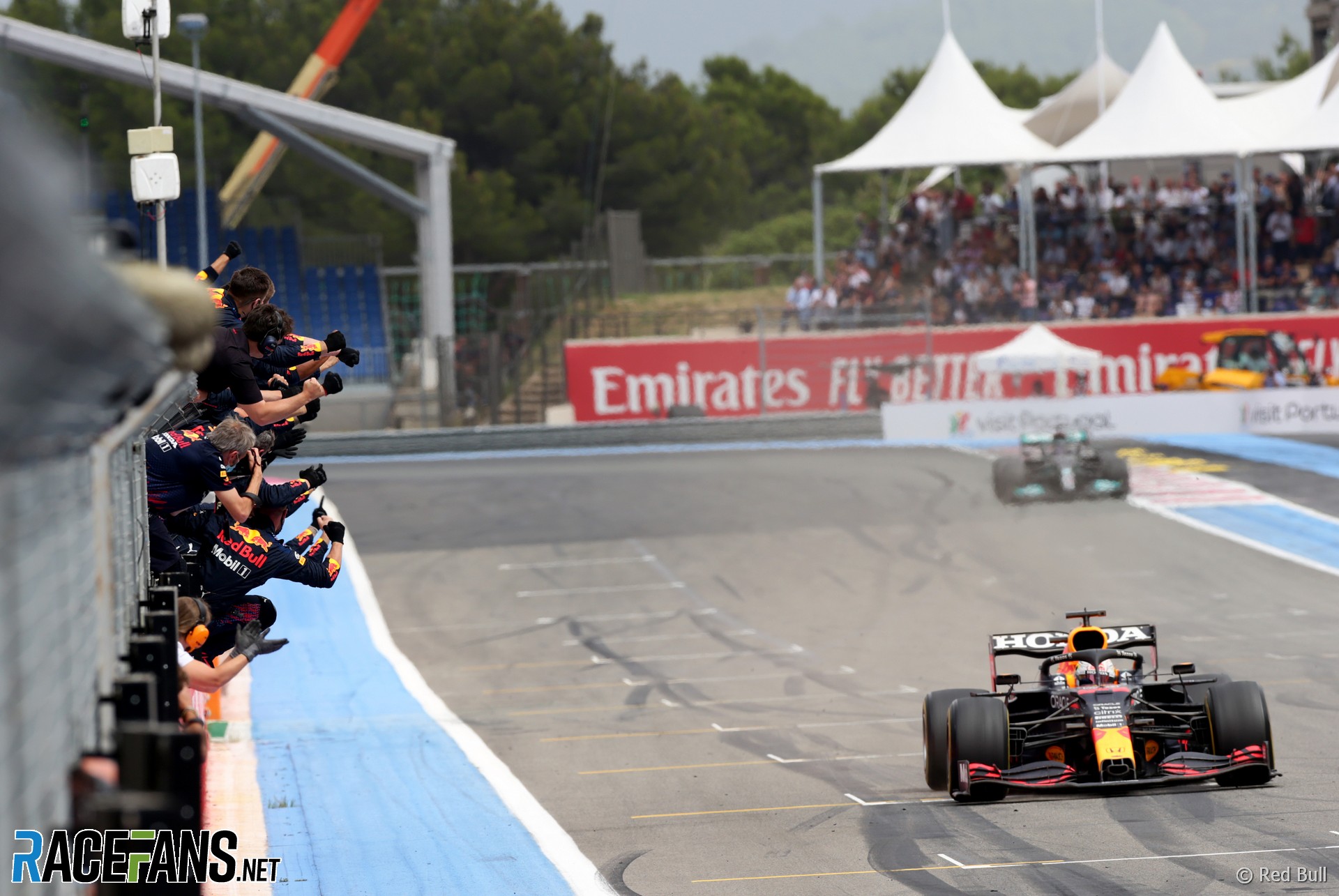 Max Verstappen stormed to victory in the French Grand Prix after passing Lewis Hamilton for the lead with one lap remaining.

A dramatic race-long battle between the two championship rivals saw Red Bull use a two stop strategy to allow Verstappen to chase down Hamilton and pass him to take his third win of the season and extend his championship lead. Sergio Perez finished third.

At the start, pole-winner Verstappen led away from Hamilton. But as the Red Bull driver rounded the first corner, a snap of oversteer caused the Red Bull to take to the escape road, losing the lead to his championship rival.

Hamilton was able to take advantage of an early lead to maintain a gap of around two seconds to the chasing Red Bull.

Charles Leclerc was the first driver to pit, immediately using the additional pace from the fresh tyres to undercut his team mate Carlos Sainz Jnr and Daniel Ricciardo to move up a considerable number of places.

With Leclerc demonstrating how powerful the undercut could be, Mercedes brought in Valtteri Bottas from third to try and position him to get ahead of Verstappen ahead. Red Bull immediately reacted and switched Verstappen onto the hard tyres the very next lap.

Mercedes chose to keep Hamilton out in the lead for an additional lap, believing they had enough of an advantage to pit the leader and resume ahead of Verstappen. However, when the Mercedes driver eventually did pit two laps later, he was shocked to see Verstappen flash back past into the lead of the race when he exited the pit lane.

Hamilton tried to put Verstappen under as much pressure as possible but was unable to get close enough to have a look at the race leader.

With the frontrunning drivers all expressing concerns over whether their hard tyres would last until the end of the race, Red Bull made an aggressive call to bring Verstappen in from the lead to switch to medium tyres for the final 20 laps of the race.

Mercedes chose not to respond to Red Bull’s surprise move and Verstappen began to gradually eat away at Hamilton’s lead out front. Sergio Perez allowed his team mate to pass with little difficulty, while Valtteri Bottas could offer little defence as Verstappen passed him for second place on the run to the Signes corner.

With two laps remaining, Verstappen got within DRS range of his rival as they entered the Mistral straight and was able to breeze past and into the lead. Hamilton could offer no riposte with his old hard tyres and was forced to watch on as Verstappen took the chequered flag to claim his third win of the season.

Perez took third, but appeared to go outside of track limits when passing Valtteri Bottas into Signes in the closing laps. He was investigated by the stewards and cleared.

Lando Norris took fifth place after a strong race for McLaren with team mate Daniel Ricciardo backing him up in sixth. Pierre Gasly fell one place from his starting position to seventh, ahead of Fernando Alonso, Sebastian Vettel and Lance Stroll, who rounded out the points.

The Ferraris of Sainz and Leclerc faded in the race to 11th and 16th respectively.