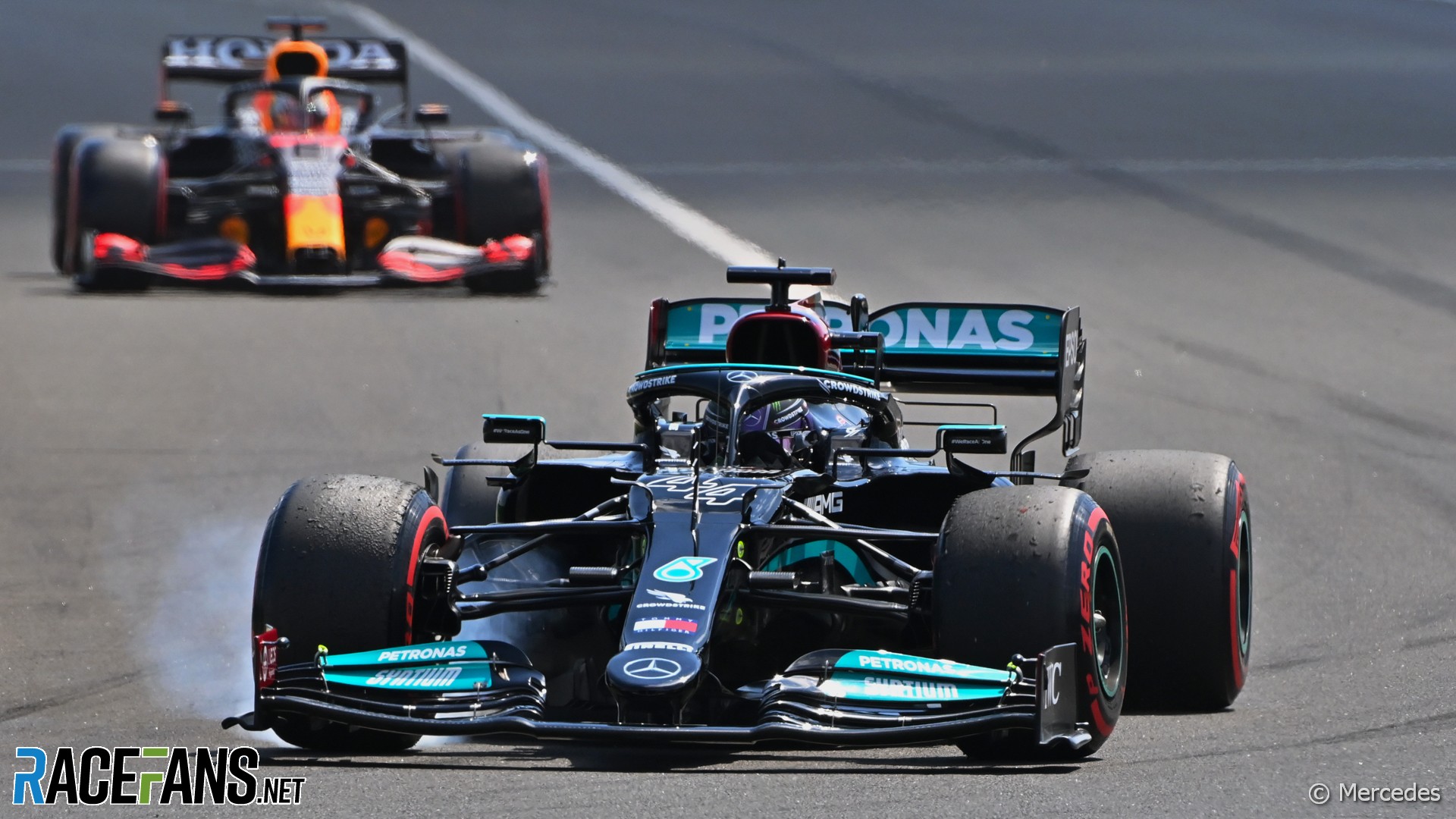 Two weeks on from the drama of Silverstone, the different strategies adopted by Mercedes and Red Bull have set up what could be another explosive start.

Unlike the other eight drivers in Q3, Mercedes’ drivers both went through Q2 on medium tyres, which they will start on. Red Bull’s Max Verstappen and Sergio Perez behind them will start the Hungarian Grand Prix on the red-walled soft compound.

On paper, that seems like an obvious advantage to Mercedes who will be able to run longer and harder in the first stint. But they’ve got to keep their track position advantage first.

As Lewis Hamilton noted, the soft tyre is worth around five metres on the approach to turn one from a grid start. Verstappen and Perez will therefore be eyeing the possibility of a slipstream from their rivals to the first corner.

Toto Wolff is concerned about the deficit his drivers would face. “We have a disadvantage off the line, so we need to be clever with the start,” he said.

Even without a tyre disadvantage, Hamilton’s starts haven’t tended to be as good as Verstappen’s this year – the one which prompted the Silverstone crash being a notable exception. Generally, Verstappen has seemed quicker off the line – like in the sprint qualifying session at Silverstone.

The start will, of course, be especially crucial given the Hungaroring’s general lack of overtaking opportunities. Verstappen has made it very clear what he thinks of any further speculation about how he and Hamilton will race each other, while team mate Perez said he wouldn’t be interested in anything happening between them. “For me tomorrow is a race that I look forward to having the best start of the year and then try to get as many places as possible and do my own race,” he said.

Fernando Alonso, who starts ninth, predicted first-lap fireworks ahead of him, noting Pierre Gasly’s strong qualifying position in fifth and the fast-starting Lando Norris and Charles Leclerc behind the AlphaTauri. Sure enough, Gasly vowed to “elbows out” in order to keep Norris and Leclerc behind him, which is vital for his strategy.

“We know on pure pace the two top teams should pull away and we should have some free air,” Gasly explained. “So the start will be extremely important for us.

“We usually manage the tyre better, it’s not always the case. For sure, if we have the clean air, that’s going to be a big difference.”

Contrary to the forecast, the very hot conditions seen on Friday persisted into Saturday. The official FIA weather forecast gives a 60% chance of thunderstorms on Sunday, but as we’ve seen before if these do not materialise another punishingly hot afternoon is likely.

This may edge drivers away from the usual one-stop strategy into two-stop territory. That will come down to how they manage their tyres, and whether the pit wall succumbs to the temptation to bring them in for an early pit stop in an attempt to jump ahead of a rival, or risks leaving them out longer.

Assuming the top four starters are still in the top four places at the end of lap one, Mercedes and Red Bull will face similar strategic choices. “If it is a two-stop then it doesn’t make a great difference whether you start on the soft or on the medium,” said Wolff.

Red Bull “have two drivers that are right there too,” he noted, “so it isn’t an advantage of ours to have Valtteri and Lewis in the top four, because they have too.”

“It’s all going to depend on who keeps the tyres alive the longest,” agrees Esteban Ocon, “and who makes the less damage on them with the track temperature how it’s going to be.”

Ocon starts eighth, on soft tyres. Only two rows behind him is Lance Stroll, who qualified twelfth but like Daniel Ricciardo in eleventh has free starting tyre choice. Although if either decide to run a hard stint off the line – a tactic Aston Martin have played with Stroll before when he’s qualified relatively low on the grid – they may suffer with tyre warm-up on the first lap. If they can survive that, the pay-off should come in being able to run longer than their rivals.

Pirelli say that a medium-hard one-stop strategy should be completely possible. However, they also say that a soft-hard strategy would be feasible, if likely slower. Intriguingly, Gasly did a 22-lap stint on soft tyres during Friday practice, the longest of any driver on that rubber, which may embolden Red Bull to risk a one-stop.

Who’s going to win the final race before the summer break? Will we see more drama between the title contenders? And can Gasly win the midfield fight?