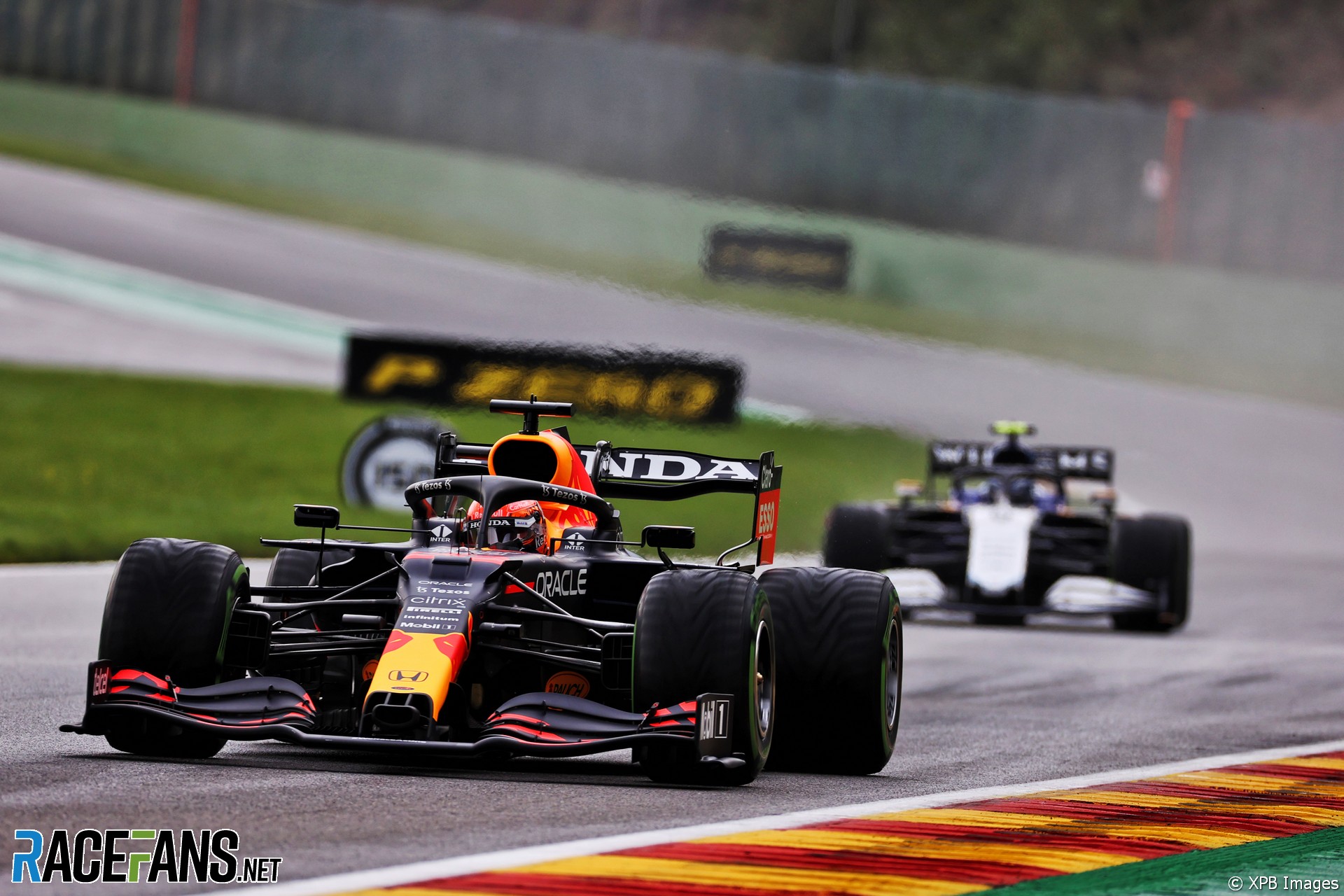 A wet qualifying session saw Q3 delayed for over half an hour after a heavy crash at Radillon for Lando Norris. Verstappen and Russell will line up on the front row ahead of Lewis Hamilton in third.

The steady rain that had consistently fallen throughout the day meant the track was wet as the scheduled start of qualifying for the Belgian Grand Prix approached.

The green flag was delayed to allow the race director to assess conditions, with the session eventually starting after a 12 minute delay.

While the majority of the field ventured out on full wet tyres, Williams opted to send George Russell and Nicholas Latifi on intermediate tyres, which appeared to backfire when Latifi spun into the grass at turn 12. However, the pair went quickest of all on their next laps, forcing all those on full wet tyres into the pits to swap to the intermediates.

With drivers warned that more rain was imminent, it became crucial to set a quick time on the intermediates before the track began to lose even further grip. Laptimes started to tumble as drivers began completing laps with the faster tyres, with Lando Norris going quickest of all in the McLaren.

In the final minutes, Sebastian Vettel was in serious danger of being eliminated before successfully moving up into tenth place. Daniel Ricciardo was able to improve as the chequered flag flew, moving up into 12th place – albeit over three seconds slower than team mate Norris, who went even faster at the top of the times.

After all cars had crossed the line, it was a case of usual suspects in the drop zone. Antonio Giovinazzi was the first driver eliminated in 16th, with Yuki Tsunoda knocked out in 17th.

Mick Schumacher out-qualified Kimi Raikkonen in the Alfa Romeo, with Nikita Mazepin the slowest of the 20 drivers after complaining of traffic.

There was no rainfall when the second qualifying session began, leading to a queue of cars at the end of the pitlane awaiting the green light.

Lando Norris was again the early pace-setter ahead of Max Verstappen as laptimes immediately improved compared to the first session.

The Mercedes pair of Lewis Hamilton and Valtteri Bottas struggled for relative pace, however, with the two only able to go seventh and ninth quickest, respectively. Mercedes’ concerns were compounded when Bottas fell into the drop zone and Verstappen improved to go fastest of all having started the session on used intermediates before switching to new rubber.

With both Mercedes at serious risk of being eliminated, the team brought both of their drivers in for a second fresh set of intermediates, leaving them time for only a single flying lap to secure safe passage through to the final shootout. In the closing moments, both Mercedes sat in the dropzone with Latifi and the two Alpines of Esteban Ocon and Fernando Alonso the other drivers under pressure.

Fortunately for Mercedes, the new intermediates had the desired impact, with Hamilton improving to go second-fastest, with Bottas able to improve to third. Mercedes’ gain was Ferrari’s loss, with Carlos Sainz Jnr knocked out in 13th place, followed by Charles Leclerc falling out of the top ten as Daniel Ricciardo and Ocon improved to ninth and tenth, respectively.

The Ferrari drivers were joined by Latifi, eliminated in 12th, as well as Alonso in 14th and Lance Stroll the last driver knocked out in 15th place.

The rain had arrived once again in the interval between Q2 and Q3, meaning that full wet tyres were a necessity for the ten remaining drivers in qualifying.

Norris radioed his McLaren team to warn them he was at risk of aquaplaning due to the volume of standing water on the circuit. As he drove through Eau Rouge and up through Radillon, Norris lost control of his McLaren and skidded into the inside barrier, sending him spinning violently back onto the circuit.

The race was immediately red flagged. Sebastian Vettel – who had complained that race control should have stopped the session due to the conditions prior to the accident – stopped alongside Norris’s stricken car to ensure that his rival was okay.

Norris was thankfully able to climb out of his wrecked McLaren into the medical car unaided. There was a lengthy delay while the marshals cleared the debris from the top of the hill, but with an undrivable level of standing water still on circuit, it took over 40 minutes before qualifying eventually resumed.

Hamilton and Verstappen both opted to take a cool-down lap before attempting a final flying lap at the end of the session. Meanwhile, Perez jumped up to second place after his first attempt of the session.

As the chequered flag flew, George Russell in the Williams began setting purple first and sector sectors and jumped up to provisional pole position. Remarkably, neither Hamilton, Perez or Bottas were able to better Russell’s time.

The only man left who could deny Russell a stunning maiden pole position was Verstappen and with a superb final sector, the Red Bull driver took pole position at the final moment. Russell secured the first front-row start for Williams since the 2017 Italian Grand Prix.

Hamilton took third on the grid, ahead of Daniel Ricciardo, Sebastian Vettel and Pierre Gasly. Sergio Perez could only manage seventh on the grid, with Bottas eighth-fastest – dooming him to start 13th on the grid for tomorrow’s race following his grid penalty for causing the opening lap collision at the Hungarian Grand Prix.