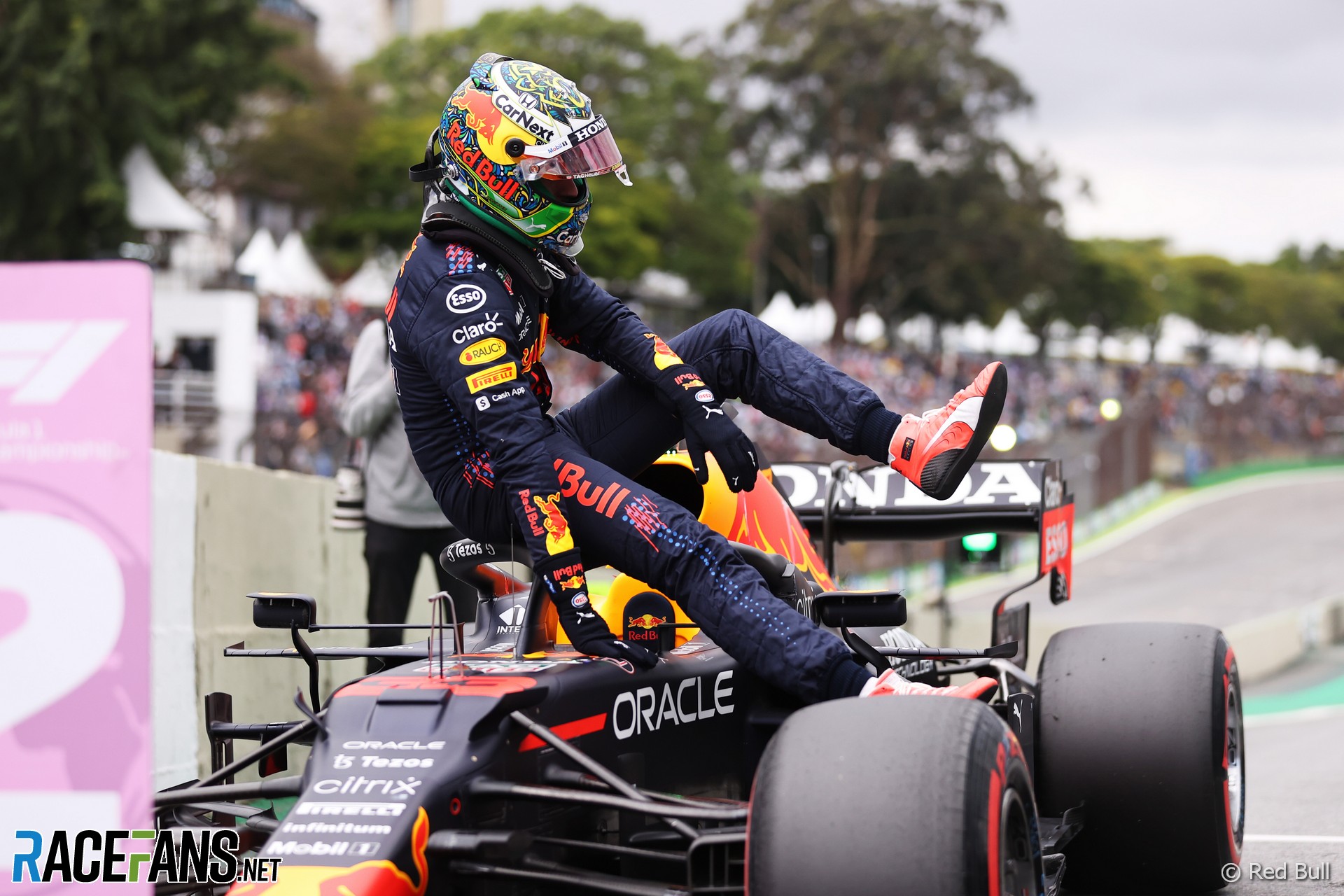 [raceweekendpromotion]Two amateur videos which surfaced on social media after Friday’s qualifying session at Interlagos (below) provided revealing insights into the twists and turns surrounding the stewards’ investigation of Lewis Hamilton’s Mercedes.

The first showed Hamilton’s W12 undergoing inspection to judge whether it conformed to the regulations governing the dimensions of its Drag Reduction System. The rules state that when DRS is open the height of the gap between the lower and upper planes must be no greater than 85 millimetres.

The video appears to show Hamilton’s car failing to meet this requirement in a test which is conducted by placing a measurement disc between the two surfaces. The same test was performed on 13 other cars, including his team mate’s and Max Verstappen’s, all of which passed.

FIA technical delegate Jo Bauer duly notified the stewards “the requirement for the maximum of 85mm… [was] not fulfilled.” The stewards summoned a Mercedes representative to a hearing.

This first video made their decision seem – to borrow an already widely-used joke – an open-and-shut matter. But further footage from the track put a stunning new spin on the controversy, and drew Hamilton’s championship rival Max Verstappen into it.

While the television cameras followed Hamilton’s celebrating his pole position for the sprint qualifying race with his team, Verstappen was comparing the rear wing on his car with his rival’s. Drivers seizing an opportunity to study the competition at close quarters is nothing new – Michael Schumacher was doing it long before Sebastian Vettel and the ‘Inspector Seb’ meme.

But Verstappen went a step beyond looking: He touched first his own car and then Hamilton’s. This appears to be why the stewards have summoned him for an “alleged breach of article 2.5.1 of the International Sporting Code”.

This is a fundamental part of the rules of racing which applies in series far beyond Formula 1. Its purpose is self-evident: It prevent drivers from interfering with their rivals’ machines before they’re checked for legality.

“Inside the parc ferme, only the officials assigned may enter,” reads the rule Verstappen is accused of breaking. “No operation, checking, tuning or repair is allowed unless authorised by the same officials or by the applicable regulations.”

How will the stewards now rule on a case which has become more complicated than it first seemed? The outcome looked dire for Hamilton at first.

A breach of the technical rules ordinarily means exclusion from qualifying and back-of-the-grid start. Whatever progress he might make from there in sprint qualifying will be trimmed to the tune of five places by the grid penalty he already has for an engine change. Never mind the possibility that replacing the problematic rear wing might breach parc ferme rules and force a pit lane start.

Meanwhile Verstappen stood to inherit Hamilton’s pole position for the sprint qualifying race. He would have a realistic crack at a maximum haul of 29 points, while Hamilton would be lucky to get much beyond the lower reaches of the top 10.

Now Verstappen’s actions are seemingly entwined with Hamilton’s investigation. Will either, neither or both of them face penalties?

It’s not hard to imagine why the stewards might be hesitant to penalise Mercedes over a component which was touched by one of their rivals before it could be tested. Why else have the parc ferme rules? Moreover, only one of the two W12s failed the inspection, notwithstanding any potential differences in specification.

If Verstappen is found to have transgressed, there’s little precedent for how this kind of violation might be treated. Would he receive a sporting sanction, or merely a financial one or the kind of ‘public service’ penalty he was given for his previous transgression in the Interlagos pit lane?

The stewards have a couple of difficult decisions to take in the knowledge the championship is riding on it.

But the ‘Inspector Max’ video is fascinating for one further reason. It reveals that even before the FIA tested Hamilton’s rear wing, Red Bull knew what they were looking for.

What triggered those suspicions?

Scrutineers fitting a 85mm circle through the rear wing opening proving that the rear wing was indeed illegal. Decision is yet to be heard. #LewisHamilton #BrazilGP #BrazilianGP pic.twitter.com/oLzYJ0l5De