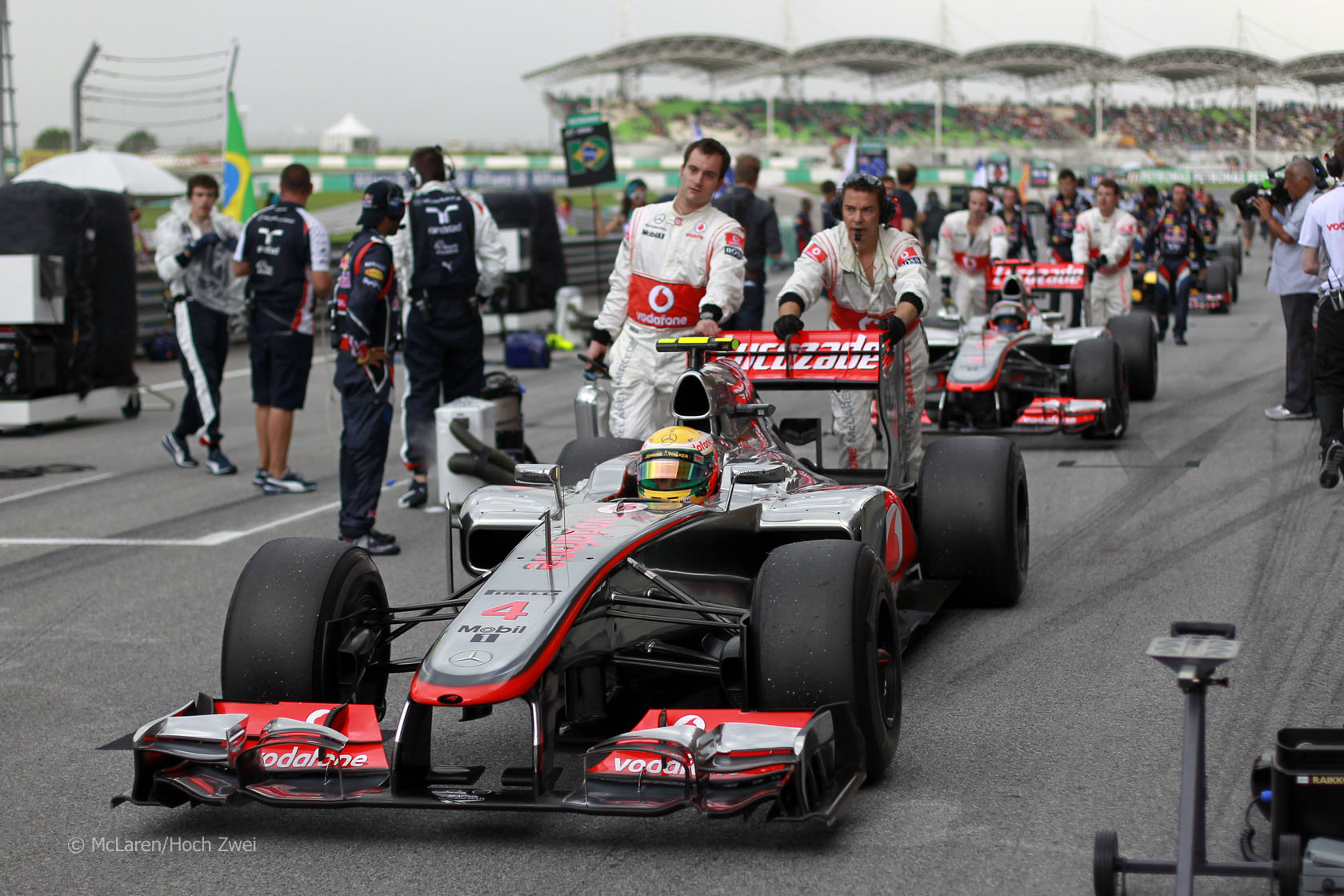 In the round-up: Lewis Hamilton admits he should have scored more points so far this year.

“I should have 50 points, but I don’t. Yeah, we would love to have 20 points more, but at least we’ve had consistency and we’re there in the fight.”

Bahrain Motor Federation president Sheikh Abdullah bin Isa Al Khalifa: “All I can guarantee you is you will be as safe as at any other Grand Prix.”

Alistair Burt (Parliamentary Under Secretary of State): “This is not a decision for the British Government and we have not made representations to the Federation Internationale de l?Û‘Èº‘‰ÛAutomobile (FIA) regarding a decision on whether to cancel, reschedule or re-locate the Bahraini Grand Prix. Similarly, we have not lobbied any other country to take a position on this matter or to make representation to the FIA. It remains entirely the decision of the FIA on whether to postpone or cancel any race. I have told the Bahraini authorities that if the race does take place, we expect it to do so under the right conditions.”

Formula One to raise $1bn in loan [refinancing] – source (Reuters)

Statement regarding Formula One finances (F1)

“Formula One Group has launched a process to extend its current financing facilities. This will involve raising $2.27bn of new facilities with maturities in 2017/18, replacing the company?Û‘Èº‘‰Ûs existing $2.92bn facilities which are due to mature in 2013/14.”

Ferrari cash in on new deal with Ecclestone (The Independent)

“Ferrari are believed to have followed Fernando Alonso’s shock win in Sunday’s Malaysian Grand Prix by concluding a lucrative deal with the Formula One ringmaster Bernie Ecclestone, receiving significantly better payments under a new Concorde Agreement to which the majority of teams are said to have agreed over the race weekend.”

Vettel labelled a Red Bully by backmarker Karthikeyan (The Mirror)

Domenicali: “We have to continue to play a counter-attacking game” (Ferrari)

“I well remember that, four years ago, in fact right after a Malaysian Grand Prix, which was won for us by Kimi Raikkonen, Felipe was more or less in the same situation as today. The papers were demanding his immediate replacement and he managed to react in the best way possible, thanks to support from the team, which saw him win two of the next three races.”

Young driver test could be in Britain (Autosport)

“One idea that has received some support is to try and shift the young driver test to take place at Silverstone immediately after the British GP. However not all teams are in favour because of the difficulty of sorting out drivers at that stage of the campaign.”

The beginning of a legend: Ayrton Senna’s breakthrough Formula One car set to sell for ?È?˙750,000 (Daily Mail)

Spot the quote from yours truly…

I hadn’t realise quite how few drivers had matched Alonso’s feat of winning at the same track with three different constructors until Paul Gilbert pointed it out:

Drivers to have won at the same venue for 3+ different teams:

Happy birthday to Casanova, LazerFX, Macca and The Genuine Jim!

Today in 2009 Williams responded to a protest by Red Bull and Ferrari against the double diffusers used by themselves, Toyota and Brawn, with a protest of their own.

Williams complained that Ferrari and Red Bull’s cars also contravened the rules, then later withdrew the protest, making the pointed remark, “Williams recognises the possibility that in this area there could be more than one interpretation of the rules.”

The double diffusers were later ruled legal, then outlawed at the end of 2010.